Boston native Jed Marum is a Celtic Folk and Bluegrass singer with Irish roots in Kilkenny and Galway. He moved to Texas in 1986, where he rekindled an earlier love of music. In 2000, he left his day job in information technology to pursue a full-time music career.

Marum draws from these roots, along with American Bluegrass and knowledge of America’s Civil War, to convey his musical tales in a style both Celtic and American.

James P. Gannon, former Wall Street Journal editor and author of "Irish Rebels, Confederate Tigers," referring to one of Jed songs, writes: "’Prayer from Little Round Top’ is the song one of the great Irish poets might have written had he marched to Gettysburg with Jed’s Irish immigrant from Alabama. The melody seems to well up from some misty glen in Connemara, wrapping the soldier’s sad story in a teardrop. It may mark me as a sentimental Irish man to say this, but if you can listen to this haunting song without finding your eyes moistening, then somewhere along life’s way, you’ve lost your soul."

High praise indeed, and it’s not a lonely view.

Marum’s album “Cross over the River: A Confederate Collection” was named Traditional Folk Album of the Year in 2009 in the Just Plain Folks Music Awards. His music has been played in productions mounted by PBS and the History Channel and on many radio broadcasts.

The Wild Geese Preservation Editor Belinda Evangelista e-mailed him some questions about his music, his roots and his perspective on the American Civil War.

The Wild Geese: The song ‘The South Wind’ expresses the motivations for the South in the American Civil War.  Can you tell me about this?

Jed Marum (right): Over the last decade, I’ve written quite a few songs that were inspired by the experience of the Irish in the American Civil War. In particular, I’ve had a great interest in the Irish experience in the South. America’s South was then, and is now, heavily populated by the Scots Irish who came to America a hundred years and more before the war. The basic tenets of the Scottish Enlightenment came with them. In particular, a belief that people should be considered equal in fundamental worth or social status and a rejection of class distinctions. These notions formed a new American view of self worth.

Perhaps it was the opportunities offered by the new world or perhaps it was something in the emerging American culture -- but added to the concepts of equality and self worth was the accepted wisdom of personal responsibility and self-reliance. So the new Southern American believed he was the equal to the rich and powerful men of his day, and that the fruit of his labor was the true measure of his worth. He believed that he was responsible for his own destiny and that he needed little from a federal government. Local government and states rights were the keys to a successful America, as most Southerners, and many Northerners, saw it. Indeed, this is still an important issue. …

These ideals are the winds of the turbulent era leading into the War Between the States. So when I decided to put these notions into a song, outlining Southern, or more correctly Confederate ideals – I chose to use a beautiful old Irish melody called “The South Wind,” and I chose to borrow some imagery from a bard of the Scottish Enlightenment, Robert Burns, and his song, “Is There for Honest Poverty,” aka “A Man's a Man for A' That.” My song is called “The South Wind,” and it is the title track of a new album that will be released [this fall]. The album’s track list is almost all original songs, all songs from the Confederacy and nearly all with an Irish or Celtic connection. “The South Wind” is my third collection of songs from or about the American Civil War.

The Wild Geese:  Do you think that being a ‘musical historian’ is an effective way to pass knowledge on in an enjoyable format? If so, how do your audiences react?

Marum:  I do believe that the “musical historian” role I play is an effective way to pass on knowledge. First of all, as a performer, I am convinced that if I enjoy what I’m presenting the audience will, too! But deeper than that, especially with Irish or Celtic audiences; they are almost by definition already interested in their culture, their heritage -- and there is a long-standing practice in presenting folk-style music of telling the story behind the song. So my audiences find my approach pretty close to what they expected … and since I’m typically billed as a Celtic performer with a focus on history, they know what they are in for.  I do write some of these songs because I truly want the real, honest-to-God story, the historical event to be retold to a new generation -- and sometimes it’s a character that I want people to know about -- or sometimes it’s the blending of their culture with the American culture within the historical context that I hope to portray in song. There are different messages I want get across and songs are a great way to pass that knowledge on. My audiences react quite favorably to the “musical historian” shows I do. People share with me the stories from their family history after every concert. They send me books or point me to website links with more stories that I might want to write or sing about. I hear from people around the world with questions and comments after [they discover] the music on YouTube, iTunes, Amazon or similar services. … And it always my historical music that motivates them to contact me.

The Wild Geese:  How did friends and family influence your music while growing up in Boston?

Marum:  My father loved to sing. He did so easily, frequently and beautifully. He grew up close to his mother’s father, Martin Little, who was born in Galway. ... Some of my father’s aunts, uncles and cousins were also born in Ireland. The extended family was always close by, always sharing company and music.

So many of the songs I sing today are songs my father sang in my home when I was growing up. They were songs from his childhood and his family. We sang “Molly Malone,” “Garden Where The Praties Grow,” and “Phil the Fluter’s Ball. “ We sang “Spancil Hill,” “Grace” and “The Foggy Dew.” I grew up loving these songs, and as I got older I discovered many more like them. Living in the Boston area, there were so many homes like mine, with first- or second-generation Irish immigrants in the family, so singing these songs just seemed natural. In the folk-music venues when I began working professionally as a musician, it just seemed normal to sing an old Irish ballad, along with my originals and my favorite Bob Dylan or Kingston Trio songs -- and nobody thought the mix unusual. Irish music was just that well known in the Boston area in the 1970s and 80s. Years later, when I moved to Texas and sang my favorites, they said, “You must be an Irish folk singer.” And since it got me work, I agreed!

The Wild Geese:  What is your Irish story?

Marum:  The Marum family came from Kilkenny to America in 1861. They landed in New York and quickly found their way to Fall River, Massachusetts, to work in the textile mills. My father’s mother’s family came from Galway. His mother was born in the U.S., but some of her older siblings were born in Ireland. I believe it is not an unusual story, but I know in my father’s home when he was growing up, they always had guests -- cousins or other relatives coming from Ireland and staying with my father’s family for a bit, until they got settled in America and moved on their own. Most of what I learned of my Irish heritage as a child, I learned from music. As I grew older and curious, I read a lot, but often it was the songs that drove my reading list.

The Wild Geese:  How is the Irish immigrant in the American Civil War inspiring to you?


Marum:  In the movie “Gangs of New York,” there was a scene that showed the Irish immigrants as they arrived in America, getting off the boat from Ireland, being handed a rifle and finding themselves instantly [coerced] into the Federal Army -- and going off to “fight for Lincoln” in the American Civil War. This was a great scene, but it’s actually a bit misleading. The brand new Irish immigrants to America, those … Famine-era newcomers, volunteered to fight the American Civil War in huge numbers -- North and South! They were happy to be in this land of freedom and opportunity. They were happy to fight for its ideals. They were happy to show that Irishmen would be loyal and valuable citizens.

America had not welcomed these recent newcomers with open arms. America thought itself to be a Protestant nation at that time, populated by industrious and self reliant people. They feared these Irish Catholics, who were impoverished and under-uneducated. Could they ever be productive and valuable citizens? 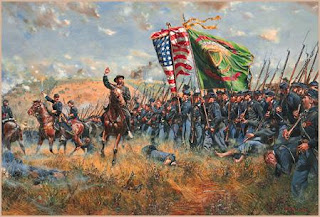 Strong was the anti-Irish feeling in the U.S. at the time but those recent Irish immigrants had something they wanted to prove. And prove it they did! Irish Regiments North and South quickly developed a reputation as brave and fierce soldiers. Military units were typically built around the communities from which they came, and so Irish regiments were formed, and their flags reflected their homeland. Golden harps on green backgrounds were very common. “Erin Go Bragh,” along with “Sons of Erin” or mottos in Irish Gaelic adorned other flags.  Being a Northerner by birth and growing up with the knowledge that many Irishmen fought for the Union, I was surprised to discover that there were quite a few Irishmen fighting for the Confederacy, as well. My Irish ancestors might have been on that ship arriving in New York from the “Gangs of New York” scene.


The Wild Geese:  How did growing up ‘Boston Irish’ spark your interest in Confederate Irish history?


Marum:  When we moved to Texas in 1986, I had been researching my Irish family roots -- and during that period, the Ken Burns [documentary series] “The Civil War” was playing. I devoured every episode! “What was it like,” I wondered, “to grow up in Ireland, immigrate to America and get here just in time to fight for your adopted country?” If my relatives had landed in Galveston or Savannah or New Orleans instead of New York -- they would have fought for the Confederacy. I started reading histories, diaries and memoirs. I read [Northern] books and Southern books, but being a recent émigré myself, to Texas, I was most interested in the Southern story -- the Confederate Irish story. I still am! WG


There is much more about Jed Marum’s music at jedmarum.com. You can hear samples of his music and purchase his albums at CDBaby, via http://www.cdbaby.com/all/jedmarum.