One of Traditional music’s most energetic and impressive acts has just announced new dates for an Irish Tour, which kicks off later this month. Artists Caitlín Nic Gabhann and Ciarán Ó Maonaigh deliver a spirited performance of music and dance rooted in the tradition; brimming with soul and life. Through fiddle, concertina and dance, Caitlín & Ciarán breathe fire into musical pieces, combining their arts with passion and spontaneity.

Accomplished musicians each in their own right, Caitlín & Ciarán have a connection as deep as the Irish folk traditions they come from. Their music is a joyful unleashing of talents learnt at the hearths of their parents, family and friends. Their 2015 debut CD release 'Caitlín & Ciarán' received a 4 star review in The Irish Times.

We recently launched their new duet album on Tradconnect and it is available for free download for broadcasters that are participating in our Download Centre. At the time Caitlín said : “We've been playing together for a good few years and the decision to make an album together came quite naturally. We've developed a sort of 'common ground' where both our styles are comfortable and can be expressed freely. I don't think the music on the album is heavily Donegal or heavily my style.  It's a mix of both Donegal and Scottish tunes, including some compositions by Vincent Broderick, Tommy Peoples, and a few of my own, and of course some dancing!”

On the album they are joined on a number of tracks by guest musicians including Jack Talty on keyboards, Sean Óg Graham on guitar and Caoimhín Ó Fearghail on bouzouki.

Here is a track from the album. 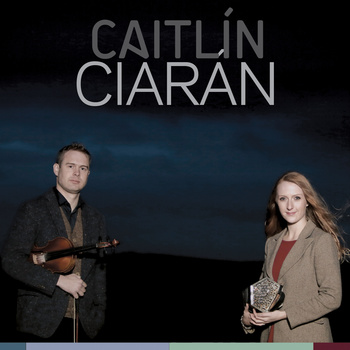 "Caitlín Nic Gabhann and Ciarán Ó Maonaigh are two of the finest instrumentalists on the Irish traditional scene. Individually they are stunning but together they bring a freshness and excitement to the music that is uniquely their own."
Robbie O'Connell – (The Clancy Brothers)

“Ciarán has that Donegal fiddlers' knack of being technically exact, fearless and free. Caitlín's concertina is no less thrilling as she expands perceptions of the instrument. It was her feet that lifted us though in the showpiece 'Belfast Hornpipe/Ms. McLeod's' with sublime synchronisation of her dancing shoes and Ciarán's playful fiddle. The gasps were audible”
New York Irish Arts – March 2015

Caitlín Nic Gabhann – concertina / dance
From Ashbourne, Co.Meath, Caitlín is a regular performer at festivals and in concert halls from North America to Asia. She is also an accomplished dancer and has toured the world with Riverdance as a troupe dancer. Writing tunes since the age of ten, her compositions have been performed in the Cork Opera House and The National Concert Hall, Dublin and recorded by renowned musicians in Ireland and abroad. She learned her music and dancing at home from her parents, Antóin and Bernie Mac Gabhann and she now teaches concertina annually at summer and winter schools in Ireland, Europe and the USA. She has performed with the RTÉ Vanbrugh Quartet, Paddy Keenan, Liam Ó Maonlaí, for Presidents and Royalty around the world, most recently at 'Ceiliúradh' in the Royal Albert Hall, London as a guest of President Michael D. Higgins. Her debut solo CD release, Caitlín was voted the 2012 'CD of the Year' award by tradconnect.com as well as being labelled the 'Top Irish Traditional Album of 2012' by The Wall Street Journal.

Ciarán Ó Maonaigh – fiddle
A former recipient of TG4 Young Musician of the Year, fiddle player Ciarán Ó Maonaigh hails from the Gaoth Dobhair gaeltacht in Co. Donegal. Growing up, he was heavily influenced by his family; his grandfather and teacher Francie Mooney, and Altan members Mairéad Ní Mhaonaigh (aunt) and Frankie Kennedy (uncle). He is also a member of the band Fidil along with Aidan O’Donnell and Damien McGeehan, and they have released 3 acclaimed albums. Fidil, released in June 2008, was described by Irish Music Magazine as “One of the most challanging and beautifully austere albums of the last fifty years”, 3 was released in 2009 and was awarded both a 5 star review and CD of the week in The Irish Times. In 2011 The Old Wheel of Fortune was released with Songlines magazine declaring it “one of the finest albums to emerge from Ireland this decade.”

The album can now be Downloaded by clicking on the icon below.

Caitlín & Ciarán are also on tour and you can find out more by visiting their website www.caitlin.ie

Interesting combination with these two different styles. I notice recent performances by Kathleen have a different type of emphasis than she used. Perhaps the strong Scottish influence in Co Donegal coming through in Ciaran's playing is the source. I ain't commenting one way or the other on its value, just sayin!

But this wee band is a lively and refreshing change to my interests, Flute / Pipes and similar. I really enjoyed both of these as soloists so the combination is a treat.