CD Launch ‘Caithréim: Music and Song from the Plays of Patrick Pearse’ by Síle Denvir 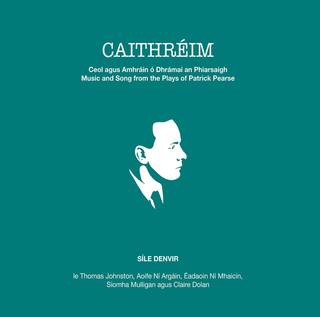 Professor Alan Titley will launch the album Caithréim: Music and Song from the Plays of Patrick Pearse arranged and performed by Síle Denvir and published by Cló Iar-Chonnacht on the 100 year anniversary of Pearse’s death, the 3rd of May. Síle Denvir will perform songs and music from Pearse’s plays at a celebratory concert, with accompanying musicians Thomas Johnston, Aoife Ní Argáin, Éadaoin Ní Mhaicín, Síomha Mulligan and Claire Dolan, giving a taste of the music and song that can be heard on this reseach based CD.

In the years before the 1916 rising, Patrick Pearse wrote and produced a number of plays and pageants in Irish and English. Although Pearse himself was reportedly tone deaf, his use of music and song as an integral part of his plays leads us to believe that he understood the effect music and song can have on an audience. Pearse frequently integrated songs into his plays as conversation, and so song became an intrinsic part of the action. This CD presents arrangements of the music and songs from Pearse’s plays, including songs composed by Pearse himself, such as ‘An Chaithréim’, while also including traditional sean-nós songs such as An ‘Draighneán Donn’. The CD also includes a very comprehensive booklet.