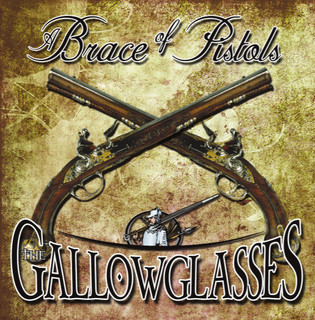 This is a track from the new album called A Brace of Pistols by San Francisco based Celtic folk band The Gallowglasses. The band members are Donovan Ryan, Lee White, Mark Boronkay and Michael McNelly.

Its a fairly well balanced album mixing some slower instrumental tracks like The Trip to Sligo/Morrison's and The Rolling Waves/The Cliffs of Moher with a range of traditional songs.

The vocal tracks however are where they excel with an excellent version of I Courted A Wee Girl which has echoes of the vocal approach taken by Slide on their recent Mendicity album.

Its mellow and reflective and they replicate the feel again with some nice harmonies on Bonny Woodhall and The Lads of the Fair.

While Donovan Ryan takes the lead on a good number of the songs Lee White has a voice with a bit of traditional grit that works just as well, complementing the overall traditional feel of the recording.  In total there are 12 tracks including 3 instrumentals.

However it the joint vocals of Ryan and White that lift the album with some well chosen material.