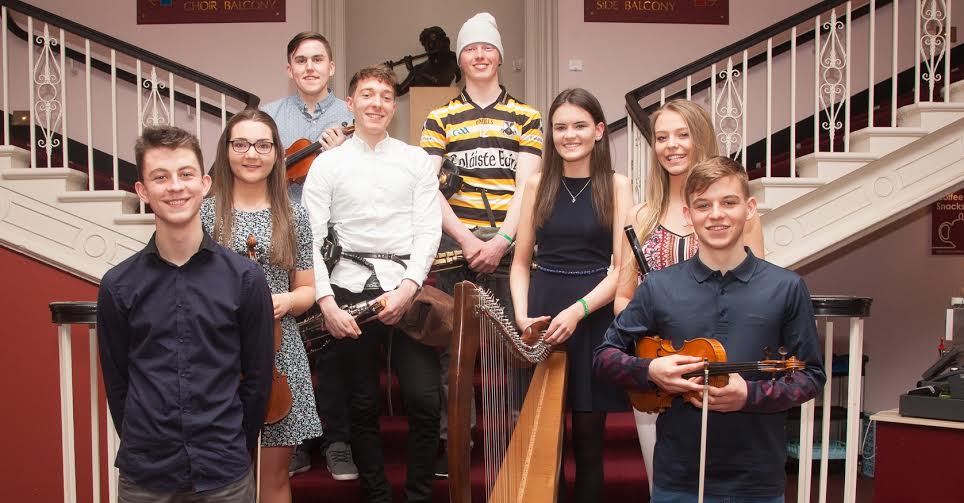 If you missed the highlights from the Siansa Gael Linn 2016 final on TG4 recently - don’t worry ! The station will broadcast the programme again on Saturday 4th June at 7.25pm. The National Concert Hall was the venue for this year’s final on Sunday 17 April. At the end of a superb concert featuring eight traditional music groups of the highest calibre from all over Ireland, the group ‘Círéib’ were crowned champions. Members Fiona Nic Gamhna, Micheál Ó Grálaigh, Caoimhe Blennerhassett, Clodagh Ní Dhaltúin, Fergal De Fuitléigh, Cathal Ó Muirgheasa along with cousins, Seán and Stiofán Ó Casaide, of the well-known musical dynasty, were thrilled to take home the Gael Linn Trophy and a cheque for €2,500. “Fuaimeanna Shliabh Luachra” from Kilcummin, Co. Kerry were awarded second place and a cheque for €1,250 while third place winners, ‘Gluaiseacht’ from West Cork, received €750.

The unique Siansa combination of competition and performance had kept a 1,000 audience enthralled during the evening while many more listened to the live broadcast on RTÉ Raidió na Gaeltachta, presented by Áine Hensey. Siansa Gael Linn challenges young musicians to be innovative and creative with traditional music and song, while at the same time appreciating the valuable heritage handed down to them. Another important element is that every aspect of the competition is organised through Irish.

Renowned traditional musicians Dónal O’Connor, Niamh Ní Charra and Declan Masterson, were the three adjudicators with the hard task of picking the winners and complimented all the young participants for their inspiring performances.

Gael Linn CEO Antoine Ó Coileáin praised the groups and their mentors who brought the standard of musicianship and song in this year’s Siansa final to a new level. ‘We in Gael Linn have been promoting Irish traditional music and song for more than 60 years. Through our record label, we bring artists such as Seosamh Ó hÉanaigh, Seán Ó Riada, Clannad, Téada and other greats to a world-wide audience’ he said. Siansa is discovering the stars of the future.’ He thanked RTÉ Raidió na Gaeltachta, Irish Music Magazine and TG4 for their continued support for Siansa.

“RTÉ Raidió na Gaeltachta is delighted to be associated with this great competition which gives support and recognition to young musicians from all over the country. In recent years we have found it much easier to find young musicians who are capable of doing interviews with us through Irish on our traditional music programmes because of their experience with Siansa Gael Linn.