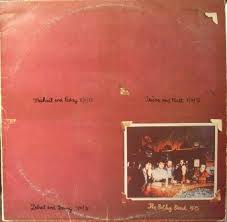 RED!  Funny how some “classic” albums are associated with colours – Planxty’s first is commonly described as the “black” album (a title actually used by Metallica and Prince),  the Beatles had their White Album, and so on.  The Bothy Band’s debut recording, simply titled “The Bothy Band 1975” was issued with a red cover, and, almost 40 years later,  is viewed by many as a manifesto for modern Irish traditional music.  Often copied, but rarely if ever equalled, the Bothy Band re-wrote the script, and in doing so, attracted the attention of many people who had previously dismissed Irish traditional music as a homage to antiquity.  They also polarised the existing body of Irish music aficionados who, in general, either embraced their radical new approach, or dismissed it as a debasement of the pure tradition.

The opening track starts with just strings on a G note, carving out an insistent jig rhythm, soon joined by the D drone of the pipes, until the melody of the Kesh jig is introduced.  But what is most remarkable is the sheer energy of the performance, tightly arranged and peppered with dynamic shifts in instrumentation, harmony and counterpoint.  For many people, including myself, this recording provided a window into Irish traditional music that had previously been foggy and obscure – this approach was direct, uncompromising and joyous.  I was an instant fan.

The Bothy Band first performed at Trinity College Dublin Exam Hall in early 1975 (with Paddy Glackin on fiddle – he was replaced by Tommy Peoples prior to the recording of this album), and people who attended the event still speak in reverential terms about the effect the music had on them.  Critically, while other bands had experimented with a variety of single or double accompanists, here the front line of uilleann pipes, fiddle and flute was matched by an unprecedented three-pronged rhythm section of guitar, bouzouki and keyboards.  Over and above that, it was the way that accompaniment was delivered that was so revolutionary, with the use of modal tuning on the stringed instruments along with a totally unique keyboard style, tightly arranged and on occasions providing the metaphorical power of a jet engine to elevate the sublime melody playing of Paddy Keenan, Matt Molloy and Tommy Peoples into the musical stratosphere (especially live in concert).  The Bothy Band were “that good”!.

The members had an incredible collective pedigree, with deep roots in the Donegal tradition, both music (via the legendary Tommy Peoples, who left the band after this recording) and song.  Micheál O’Domhnaill and sister Tríona enjoyed heady summers in Rannafast as they grew up, and Dónal Lunny also spent time there, as his mother hailed from the Donegal Gaeltacht.   But the three accompanists also had a catholic taste in music which infused and enriched their collective approach, with Micheál deciding to adopt the DADGAD tuning beloved of renowned English folk guitarists such as John Renbourn and Bert Jansch, and Tríona eschewing the “traditional” style of keyboard accompaniment for something completely new and refreshing, with amplified bass notes underpinning the strings and providing a level of power previously unavailable.    Dónal Lunny came up with a revised version of his groundbreaking work on bouzouki with Planxty, to provide energetic and mischievously rhythmic counterpoint throughout, occasionally moonlighting on bodhrán and guitar.  His trademark style, which has inspired generations of imitators, was underpinned by a re-design of the original Greek instrument to include eight strings and a flat-backed body, with a different tuning (GDAD) to facilitate modal accompaniment.

The debut studio recording combined “tour de force” sets of tunes with songs collected by Micheál and Tríona, whose father had been employed by the Irish Folklore Commission as a researcher, and whose aunt Neilí from Rannafast provided them with a rich store of songs in both Irish and English.  The Donegal connection also introduced a link to the Scottish tradition, as many Donegal people emigrated to Scotland, and the band’s name is an affectionate reference to the “bothies” where expatriate Irish musicians held their sessions.  Matt Molloy, arguably our best-ever Irish traditional flute player, had a peerless collection of tunes from the Sligo and Roscommon regions, and Paddy Keenan (once described by Lunny as “the Jimi Hendrix of the pipes “) provided precocious virtuosity and an authentic link to the travelling pipers, who were hugely influential in the development of that “open” style which provided such energy to the Bothy Band’s music. 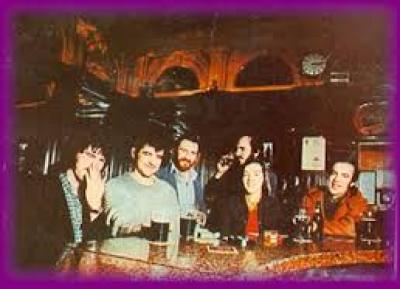 The album is also a “director’s cut” of the best tunes that the band members had assembled from their collective musical experience.  After the opening track, as described above, the “Green Groves of Eireann/Flowers of Red Hill” combination emphasises the new order with its relentless syncopation and sheer exuberance.  Then, we relax into the apparent simplicity of “Do You Love an Apple”, which underneath an effortlessly layered arrangement, draws the listener inward to a subtle interrogation of its classic harmonic sensibility.  After this, the marvellous “Julia Delaney” provides some unexpected variations on the theme, including some staggering modulations which can only have come from collective exposure to the avant-garde.  And so it goes on, the lyrical beauty of “Coleman’s Cross” and “The Tar Road to Sligo” interspersed with Micheál’s glorious reading of “Is Trua Nach Bhfuil Mé in Éirinn”.

The imprint of this album is such that in many informal Irish music sessions, over 35 years after they were recorded, it is frequently impossible to avoid a collective will to change to the exact “running order” of tunes from Bothy Band sets.  Take the last track – “The Salamanca/The Banshee/The Sailor’s Bonnet” – it’s an extremely brave musician who’ll resist the almost instinctive change from each tune to the next.

Let’s salute “The Bothy Band 1975” for what it is – the “game-changer” which affirmed that Irish music was/is a living tradition, a vibrant and visceral force which could reinforce and re-codify Ireland’s relationship with the outside world.  The seeds of “Riverdance” include substantial DNA from the Bothy Band.  “All is changed, changed utterly; a terrible beauty is born.”  W.B. Yeats, I suspect, would have been proud to substitute another, more appropriate word for “terrible” if he was around in 1975.  What would YOU choose?

Really great review there Mark.  Love it.  Inspired to get the album out again. T