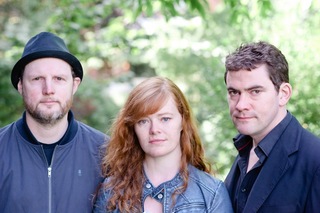 With decades of individual touring and performing experience, Colleen Raney, Casey Neill, and Johnny B. Connolly have teamed up to become one of the most exciting and innovative Irish bands on the west coast. Portland’s Colleen Raney, who has toured extensively throughout both the U.S. and Ireland, bookended 2011 with a pair of fine albums, respectively her second and third: January's lushly-produced Lark and last October's stripped-down Cuan.  Both garnered national and international airplay and acclaim. She breathes new life into the old songs, finding facets in the music that haven’t been heard before and performing in the company of gifted friends who illustrate both the most delicate and upbeat aspects of her winning style. It’s earned her a following both among longtime adherents of Celtic music and younger fans who are new to the genre. www.colleenraney.com

Johnny Connolly was born and raised in Dublin, Ireland. He began playing when he was eight and by age 15 he was a regular feature around his hometown, performing with musicians sometimes twice his age. Johnny’s dexterity on the accordion earned him a place with the established Celtic ensemble, Anam, at the age of seventeen. In 1996 Johnny seized an opportunity to bring his skills to America. In 2001 he signed with Green Linnet records and released his first album entitled "Bridgetown" named after his adopted hometown, Portland. While based in Portland, Johnny tours internationally, performing at festivals, concerts, and schools.

Casey Neill is a singer/songwriter and guitar player out of Portland, Oregon. In addition to an active career performing with his rock band (Casey Neill & The Norway Rats), he has been working as a sideman with many of the top names in Celtic music. Casey has backed up and recorded with master traditional fiddlers such as Kevin Burke, Martin Hayes, and Johnny Cunningham. Johnny also produced 2 of Casey's CDs and played in his band for many years. Irish supergroup Solas recorded Casey's original song "Lowground" on their CD's "Waiting for an Echo" and "Reunion".

“Rarely is an artist as deeply entrenched in a musical niche as Colleen Raney able to present centuries-old music with an eye toward current and future listeners outside of the genre. By adapting and developing her voice, however, and by surrounding herself with a constantly-evolving ensemble of the best musicians the Northwest has to offer (Celtic-centric or otherwise), she manages to both credit her training and history, and stake claim as a serious presence in contemporary folk music.”  Katie Presley, Bitch Magazine, January 2011

“Singing with a deep love for the tradition, and for the dark poetry of Celtic song, Colleen has been drawing new life from the old ballads and renewing our love for Celtic music.”  Devon Leger, Hearth Music

“Raney brings a rich, heart, and inviting voice – unmistakably American and without affectation or pretense – to her music.”  Sean Smith, Boston Irish Reporter, May 2012