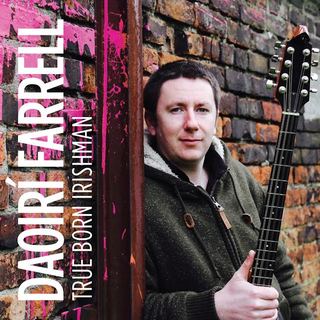 Daoirí Farrell has significantly enhanced his reputation as one of our finest traditional singers in the years since the release of his debut CD “The First Turn” in 2009.  “True Born Irishman” has been several years in the making, and Daoirí and I met up recently to discuss the new CD and on an initial listen, this latest recording is a superb piece of work, where he is joined by an A-list of hand-picked musicians.   These include guitarist extraordinaire Tony Byrne, percussionist Robbie Walsh, Pat Daly on fiddle, pipers  James Mahon and Eoin Kenny (also featuring on whistle) and Mike McGoldrick (I’ll be reviewing the new CD once I’ve had a chance to listen to it a few times…)

Daoirí is a graduate of the Ceoltóir Diploma in Irish Music Performance run at Ballyfermot College of Further Education and is full of praise for the dedicated team lead by Paul McGrattan who mentored him and developed his skills.  “The best two years of my life so far”, he says with characteristic understatement.  Through this course, he came into contact with Alan Doherty who played a key role in the production of “The First Turn” in 2009.  This CD was extremely well-received and was a stunning debut from someone who was still developing rapidly as a musician and singer.

Within a few short years, DaoirÍ had studied music to Masters level and won an All-Ireland title at the Fleadh Cheoil in Derry in 2013.  He has developed an enviable reputation as a solo performer, as well as collaborating with a range of well-known figures in Irish music, including Paddy Keenan, Donal Lunny and Mike McGoldrick.  His band FourWinds released a critically-acclaimed CD last year and have their own busy touring schedule.

Recording of “True Born Irishman” was done at Asylum Studios in Dublin with engineer Liam Mulvaney and the sound is very authentic with superb vocals from Daoirí throughout.  What is also evident is the development in his bouzouki playing – an instrument he only started playing while on the Ceoltóir course.  Daoirí has been playing Joe Foley instruments for several years now; his current instrument is a large-sized spruce and rosewood bouzouki.

The new CD is a mixture of old and new songs – the hallmark is the level of engagement that Daoirí has with each of them - “they are triggers for memories and feelings from different times and places over the past few years” as he says in the sleeve notes.  Influences include John Doyle, Andy Irvine, Damien Dempsey and Lynched and it’s clear that Daoirí is also establishing himself at the vanguard of Irish traditional song as well.  “If I hear something I like, I’ll try it out and hope to stick with it to see where it goes”, he says.  Like all good singers, he is very reluctant to perform material that he is not fully committed to.

“Van Diemens’ Land” is a stand-out track from the CD which was a long time in development – a song that Daoirí initially heard acapella at the Goilín Club, then in an accompanied version by John Doyle which he worked on at a masterclass in UL with John Doyle, Donal Lunny and Mike Galvin.   By the time that his version was recorded, further input from fellow musicians Tony Byrne and Robbie Walsh delivered a final result very close to an ideal treatment that Daoirí had evolved in his own mind over several years.   He’s very happy with the quality of the new CD, and after an initial listen, it’s one of those recordings that warrants repeated listening, as each track has been carefully crafted using top-class musicians.

Planned activities include a CD launch event in Whelans on October 25; here is a link to the event:

There are plenty of gigs lined up to promote the CD including a UK launch in November.  For 2017, there are plans for FourWinds to tour Australia/New Zealand in January.  He’s planning to tour with Damien O’Kane in March, with further festivals to follow next summer.  He’s a singer and musician in high demand, but one of the most endearing things about Daoirí Farrell is that he’s exactly the same friendly, down to earth and humorous individual that he always was.  He hasn’t changed a bit, nor would anyone who knows him want him to.

Trying to figure out how to order the new CD from the US. Any thoughts?