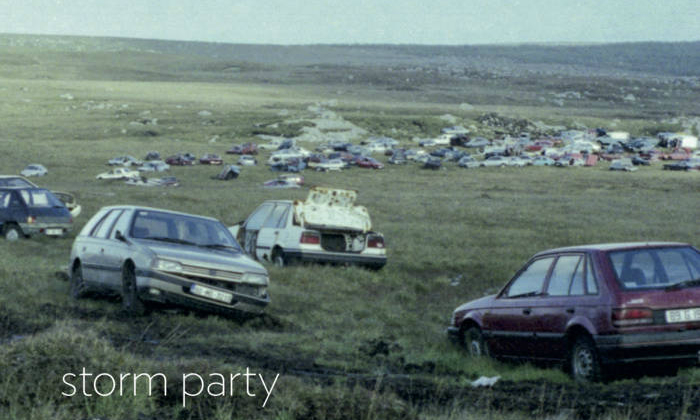 Storm Party is the debut album by Irish folk and trad trio d'Bize, who have been gathering fans from across the globe since 2014 with their rich mixture of raw energy and stunning musicianship.

Featuring intricate melodies and stomping foot to the floor rhythms, d’Bize are a versatile trio with a very dynamic setlist of songs, both new and old from the Folk and Trad traditions of Ireland, Scotland, Cape Breton and Appalachia.

This is track 1 from the album called Frenchies Reels and includes the tunes Scottish (French March), Mother’s Delight and Humours of Westport.

The above track displays the band’s ability to capture a mixture of styles with ease. d’Bize teamed up with revered musician and producer Donogh Hennessy (Sharon Shannon, Lúnasa) in early 2016 to record their official debut and the album was recently featured as 'Album of the Week' on ‘Nead na Fuiseoige’ ar Radió na Gaeltachta.

They also produced this official video for another track from the album called “Echoing Green”, adapted by the band from the William Blake poem of the same name.

A track from the album has also been included on transatlantic entertainment on Aer Lingus flights for the autumn period and has been critically acclaimed at home and abroad.

Since their formation in 2014, the band have been in high demand taking in performances at Glastonbury, Electric Picnic, Knockanstockan, Townlands Carnival, Clifden Arts Festival among others.

Members Yvonne Bolton from Carlow, Neil Fitzgibbon from Athlone and Paddy Morgan from Down are well steeped in Irish traditional tune playing. A touch of Flamenco and US old-time can also be heard in the unique style of the band. Irish Music Magazine commented that their unique repertoire of tunes “keep you on your listening toes….instrumental combinations fuse delightfully….. a detailed dexterity of play is what you’ll get with (the album) Storm Party."

The album is now on release and can be purchased on Bandcamp.

All tracks arranged by d’Bize.

Recorded and mixed by Donogh Hennessy at Studio Mhic an daill.

Thank you to Seamus McKibbin for On Waikiki Beach from the playing of Paddy Flanagan, Collette McNulty for her harmony on Piper Through the Meadow Straying, and Daygan Robinson for The Fisherman's Lament.