“Strong Bow” is the 4th studio album by multi-award winning Canadian fiddler, Kiérah. It is the follow up to the highly acclaimed “Stonemason’s Daughter”, released in 2013 and winner of a 2013 Canadian Folk Music Award.

On "Strong Bow" she raises the bar, as both musician and composer, with a collection that delves into her past where inspiration lies, and to the future as she showcases 15 original tunes.  The album features music from Ireland, Scotland, Poland and Canada, including compositions by Dee Armstrong (Kila), Kevin O’Neil (Treacherous Orchestra), Peadar O Riada, Colin Farrell (Lunasa), Jarlath Henderson, Michael McGoldrick, Emile Benoit and Gordon Duncan.

Kiérah is the youngest of seven children, and grew up in an environment where family and friends were always playing music. Her favourite memory she says was “waking up each morning to recordings of Irish or Cape Breton music blaring through the house. Martin Hayes and Canadian group Leahy were my biggest inspirations”. 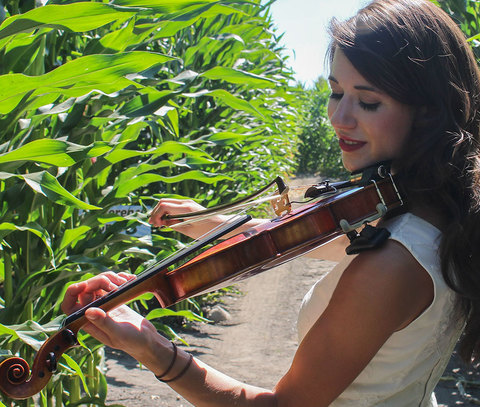 She studied classical violin initially and developed the critical technique that is becoming evermore common among traditional players. Add to this a period studying piano combined with a strong Irish/Scottish heritage and it was inevitable that music would become her passion, with traditional fiddle her preferred instrument. Her travels across Canada and Ireland brought her into contact with other fiddle greats including John Carty, Matt Cranitch, Jerry Holland and Troy MacGillivray.

At a young age she released two traditional albums – “Irish Madness” and “A Fiddle Affair” which received nominations by the Canadian Folk Music Awards in 2008 and 2010.

“Strong Bow” is now on release and can be purchased from iTunes.

Visit www.irishmadness.com for more information and to listen to samples.