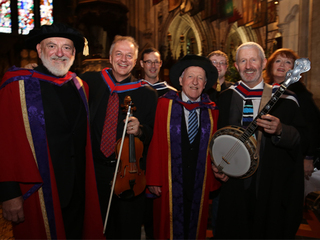 DIT ( Dublin Institute of Technology) has conferred an honorary doctorate on music legends The Chieftains, in recognition of their outstanding contribution to Irish music nationally and internationally and their role as cultural ambassadors for the country.  Members of the traditional music group, which was formed 51 years ago – Paddy Maloney, Seán Keane, Matt Molloy, Kevin Conneff and Tríona Marshall – were conferred at the graduation ceremony for DIT music, drama and media students on Saturday 23 November.

Speaking at the ceremony at St Patrick’s Cathedral, Paddy Maloney said, “It is a great musical achievement for The Chieftains to be receiving an honorary doctorate from Dublin Institute of Technology.

“It’s wonderful for the Chieftains to be recognised individually as well as collectively with this kind of tribute.”Mr Maloney said that after so many years of making music, it was very special to be given this recognition.

President of DIT, Professor Brian Norton, said, “DIT honours The Chieftains for their outstanding contribution to music and their vital role in bringing Irish culture to new audiences around the world. We also acknowledge them as standard bearers for graduates assembled here who are about to embark on their own careers in music, drama and media.”

Sheila Larchet Cuthbert, who has had a long and distinguished career as a musician, teacher, arranger and researcher, also received an honorary doctorate at the ceremony. In particular, she has been a passionate advocate for Ireland’s national instrument, the harp.  Amongst Sheila’s many accomplishments, she was principal harpist with Liverpool Philharmonic Orchestra under the celebrated conductor Sir Malcom Sargent and wrote the definitive publication The Irish Harp Book.  Family and friends of Sheila Larchet Cuthbert and The Chieftains were in the audience at St Patrick’s Cathedral to see the awarding of the honorary doctorates and attended a special reception afterwards.

On leaving St Patrick’s Cathedral as part of the academic procession, The Chieftains were greeted with a huge cheer from the graduating classes of 2013.

The Chieftains have been highly influential in the world of Irish traditional music – their combination of uilleann pipes, fiddle, flute, tin whistle, bodhrán and later the harp have become synonymous with the music and culture of Ireland.  They formed in 1962 when Paddy Maloney invited four of the most highly regarded Irish traditional musicians together for a one-off recording for the second album release of Gareth Browne’s new company, Claddagh Records.

Many gifted musicians have played with The Chieftains throughout the years. They’ve collaborated with a myriad of cultures – from playing with Chinese folk musicians to country musicians in Nashville and incorporating the music of Mexico in their 2010 San Patricio project. They’ve played with musicians as varied as The Rolling Stones, Van Morrison, James Galway, Bon Iver and Imelda May. Source www.dit.ie