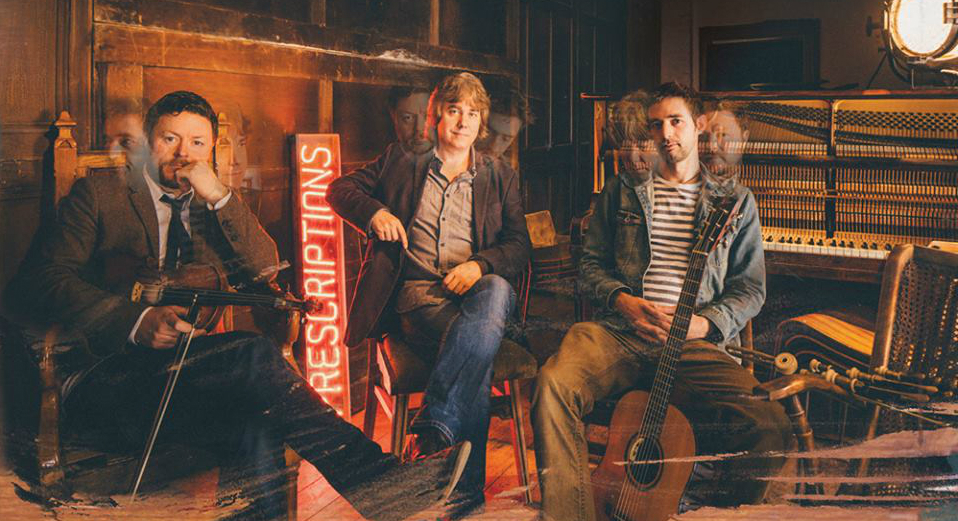 Welcome to Tradconnect’s Worldwide Album Launch Series. For these launches we are working with over 65 radio broadcasters globally, making new traditional releases available for immediate free download through TradRaidió, our Download Centre. For artists this makes an online launch a truly global event with radio stations around the world gaining immediate access to the album.

Ulaid is the new release by John McSherry, Dónal O’Connor and  Seán Óg Graham. John and Dónal are the creative force behind the highly innovative traditional band At First Light. They have toured the world extensively and produced some of the most influential albums in Irish music today. Seán Óg Graham is regarded as one of Ireland’s finest accompanists and he tours and records with the successful and dynamic group Beoga. All three are currently living in County Antrim in the North East of Ireland, and having spent many late nights in each other's company on the Belfast session scene, it was inevitable that they would come together to record at some stage.

Ulaid features new compositions which sit comfortably alongside traditional pieces from 19th Century collections, plus fresh and progressive arrangements, coupled with occasions of free form solos. From Ireland to the neighbouring Celtic regions, they chart a path from the ancient music of the Gael to the contemporary shape of traditional Irish music today.

This is Track 3 called Roll it There, Roisín.  It is a new composition, the origins of which they detail in the liner notes: “In the epic cattle raid of Cooley, An Táin, Queen Medb marched her army of Connaught men across Dundalk Bay at Áth Lethan in pursuit of Donn Cuailgne, the Brown Bull of Cooley.The reel was composed as part of a suite of music that was commissioned by Na Magha CLG and performed in the Guildhall in Derry in May 2015. We dedicate this tune to Feargal McNicholl and Dave Duggan, both great hurling men and visionaries.

We were initially stuck for a name for this set, however whilst recording it for Fleadh TV, Dónal was reminded of a favourite old catchphrase of the Irish TV host Gay Byrne. So Roisín rolled it!

John states that their music is influenced by many different styles and cultures. “We've been listening to music from other Celtic regions (Brittany, Asturias etc) for years now” he says. “We love the different rhythms and feel that this music has, and we always like to mix it in with our own music. We've always been of the opinion that if a melody grabs you then it's worth investigating, no matter where in the world it's from. Our aim was to create a musical journey for the listener through varying moods - to evoke something different with each track. It's not so easy to to do this with jigs and reels alone. Hopefully we've achieved this and created an emotive musical landscape for the listener to venture through”. Dónal and John felt that they got tremendous feedback from their release 'Tripswitch' on Vertical records in 2006. The most common comment was that people really enjoyed the blend of material, Irish, European, old and new so it was with this in mind that they wanted to include some of their more recent compositions alongside the older material. “We've been commissioned to write music as part of the City of Culture legacy fund in Derry and by the Art Per Cent Scheme/ Louth County Council in recent times, and the album features a couple of pieces from these commissions.”

According to Seán Óg they have also drawn on some old collections for material. “Dónal has been researching and preparing for publication a collection of Oriel dance music from 1817. The tunes were collected and transcribed on the Louth/Armagh border by fiddler Padraig Mac Gathain and they have recorded a piece from this collection, as well as tunes from an old Scottish collection : James Aird's 1778 Publication 'A Selection of Scotch, English, Irish and Foreign Airs adapted to the Fife, Violin, or German-Flute', which is contained in The Glen Collection in The National Library of Scotland”.

Alongside this, he say they have also chosen some tunes from the Irish tradition with unique versions or variations which they feel fit well within the body of the album. They also decided to record the album as quickly as possible in order to keep it organic and fresh sounding. Dónal says “it was recorded in 4-5 days in total with 3 days mixing. This way we were limited to the amount of editing/ post production that could be done. We're all pretty busy with our own studios and projects and we know what it can be like to get bogged down in an album, so we were keen to avoid this and also to record it in such a way as to be able to recreate it live with just the three of us on stage.”

Dónal, John and Seán have just started a tour with 18 gigs in total. You can find out more by visiting their website : www.ulaidmusic.com

The album is available to purchase from iTunes by clicking on the logo below.

Produced by McSherry, O'Connor and Graham.

Engineered by O'Connor and Graham.

Mixed at Big Banana Studios by Graham, O'Connor and McSherry.

Carter and all at www.lawrencestreetworkshops.com