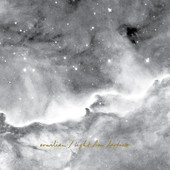 I have to say I was disappointed after hearing Erwilian’s new album, Light from Darkness. I was disappointed that I had not heard of their previous two albums, Renovata and Midwinter’s Night. This mostly acoustic thirteen-track album is completely refreshing. I read with amusement other’s comparisons of Erwilian’s music to Blackmore’s Night, Tingstad & Rumbel and others. Not even close. Their Neo-Renaissance, sometimes Celtic, or maybe New Age including folk music really defies common description. See what I mean?

This northwest group, I’ll call them a Celtic/folk group for now, is made up of founders Scott Melton and Jordan Buetow along with Bethel Melton, Jeff Reed and Bill Bowser. I heard various human powered instruments on the recording including guitars, dulcimer, recorders, violins, pennywhistles, and assorted percussive instruments. Incidentally, the package as a whole is well thought out with cohesive liner notes and wondrous artwork by the mysterious “jb”.

Erwilian manages to translate the familiar into something entirely novel on this subliminal album. You think that you are enjoying some wonderful Celtic/folk music when suddenly you realize that these soothing, beautiful songs are all prayers, hymns, and inspirational devotions of various sorts.

The opening number is a two-part piece segueing into the next cut. Adoramus is a prayer written in the style somewhere between the Renaissance and the Baroque period. The recorders are so clear and bright that they wholehearted represent the hallowed sound of a high-register pipe organ. The tune transitions into St.Brendan’s, a well-known entreaty from decades ago. The prayer is dedicated to the Patron Saint of Travelers and we ask his blessing as we set out on this musical pilgrimage.

Follower is reminiscent of some of Kevin Wood’s sacred music. The strength of the resounding flute or recorder as voice and the accompanying guitar is quite beautiful. It is a tune of supplication and an appeal for a blessing. Surely it will be granted.

The interplay of harp and cello on Átta Fossar was breathtaking. The cello, by Kathy Spampinato, flowed like ice growing over water as the harp fairly sparkled in the distance. The title, translated from Icelandic, means “Eight Waterfalls’. What splendid images it conjures to the mind’s eye. This was one of my favorites on the album. It was if I was watching a great waterfall, the water billowing like a cloud over the edge of a towering precipice, but everything was in total silence.

Of all the songs on Light from Darkness, Ex Tenebris, or Out of Darkness representing the title tune, has a more classical feel, especially in the intro.

Although the song speaks of darkness, it is a metaphor, I think, for ignorance. It is not so much as a celebratory breakthrough, but more of an understanding that a change has taken place, perhaps a realization. Strong melody and light percussion make for a remarkable tune.

Bill Bowser’s artful guitar playing is prominent in the hymn Gehālgian. It is obvious that it is taken from a well-known hymn called, “Holy, Holy, Holy” but the style is very reverent with the addition of hammered dulcimer giving it an “old timey” feel. I could imagine the bowed heads, the simplicity of the altar and the raggedy line of chairs and stools in the chapel, reminding me of Mathew 18:20, “For where two or three gather in my name, I am with them.”

The music box tune Vespers surprised me. The idea of vespers to me is an almost silent, impassioned entreaty, but there is a lightness of heart here, as if offered by a child’s heart and it makes it all the more humbling.

I know a lot of labor went into the making of this work. The compositions are complex, yet have a hand-wrought feel and the production values are first rate. I’m betting more paper and pencil were used on this than a Mac-Book. I have to say I enjoyed every song on this album. Erwilian’s strength of faith and creative powers blend rather well on an album of not only beautiful songs, but also music with a purpose. Highly recommended.