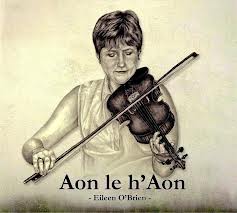 This is an exciting prospect from Eileen O' Brien, a Tipperary fiddler with a background that you could say is truly steeped in the tradition.  Her father Paddy was instrumental in establishing the B/C style of button accordion playing as we know it today.  Paddy was also one of the most prolific composers of traditional music. Dinny O'Brien, (Eileen's grandfather) played fiddle and concertina and was a highly influential figure in Irish traditional music. He was the leader of the "Bridge Ceili Band" in the 1950's and 60's.  Eileen's late mother was a member of the Seery family from Milltown, Rathconrath, Mullingar. Her mother Eileen Seery was a noted singer in her day. Eileen's uncle, Sean Seery(piper) and grandfather Jim Seery(fiddle player) were both founder members of Comhaltas Ceoltoiri Eireann.

Eileen herself  is an All-Ireland champion in both senior fiddle and senior fiddle slow airs. She is also a composer and some of her compositions have been recorded by the artists John Carty and The Kane Sisters. She has also performed in many countries, U.S.A Europe, China, Russia, Australia and New Zealand. She is a highly respected teacher and has influenced many aspiring fiddle players.

At present Eileen is a tutor at the I.W.A.M.D at the University of Limerick where she teaches students undertaking both undergraduate and postgraduate programmes.  She has performed with many great names over the years like Bobby Gardiner, Joe Burke, Ann Conroy- Burke, Martin Connolly,Jimmy McGreevy, Deirdre McSherry, Martin & Seamus Connolly, Mary & Andrew McNamara, Geraldine & Eamon Cotter, Catherine McEvoy and many more.

Eileen has recorded three albums to date, “Newtown Bridge”1999, “The Fiddler’s Choice”2005 and her new album “Aon le hAon”2012.She has produced two books of music, “The Compositions of Paddy O’Brien” 1991 and “The Definitive Collection of the Music of Paddy O’Brien” 2009 both with J.D.C.Publications.

Eileen new album “Aon le hAon le Eileen O’Brien” was launched by legendary accordion player Joe Burke at this year’s Willie Clancy Summer School. This is an album of twenty tracks of unaccompanied fiddle music. It contains seventeen tracks of Eileen playing her father’s compositions and three tracks of traditional slow airs. It reflects the musical style and immense influence of the O’Brien family from North Tipperary. We look forward to getting a copy and will hopefully follow up with a review.

And don't forget that Sean Ryan (Fiddler and Composer) is also part of the family Paddy O'Brien's first cousin....