Our sample track from the album is the opening track from the album. The first slip jig, composed by Fermanagh flautist and singer Cathal McConnell, a tune written in the key of F sharp minor, is one that Tim and Fíona have been playing down through the years. The Night Before Poor Larry was Stretched lends its melody to an 18th-century Dublin execution ballad of the same name; it is one of hundreds of tunes that they have learned from Dublin piper/teacher Joe Doyle, and can be found in his recent publication Music For the Irish Pipes (NPU, 2016). They finish off the set with The Swaggering Jig, a fairly common session tune that gives a nice major finish to an otherwise minor set.

Tim and Fíona have been performing together in for nearly 20 years and have a very close musical upbringing; both attending Comhaltas Craobh Chualann in Monkstown receiving tuition from Joe Toolan, Sean Montgomery, Liam O’Connor among others. They also owe a lot to Fiona’s mum Helen and Tim’s dad Joe (both banjo players) for their guidance during their formative years as a duet. 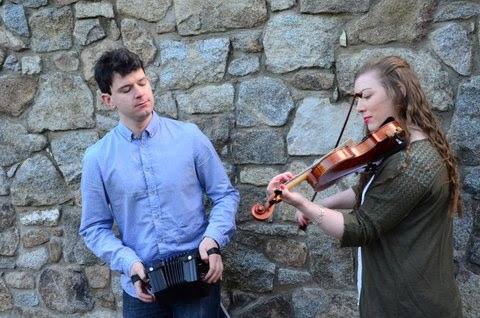 There is a story with light humour attached to the name of the album, ‘Scáthanna’. Initially coming up short with an album name they found relevant to them, the duo reverted back to their childhood memories.

"Growing up, we found our paths crossing in every direction - from attending the same secondary school, music and theory lessons and even tennis lessons!  As recently as 2015, we were invited on the same Comhaltas tour group.  There was a long running joke between our groups of friends that we were each other’s shadows growing up. We decided to put that joke to good use, with the end result being 'Scáthanna'”.

The album was released in July at the Cobblestone, Dublin and the duo have since been in demand, performing at numerous festivals.

For more information visit their Facebook Page or purchase vis this Paypal page.