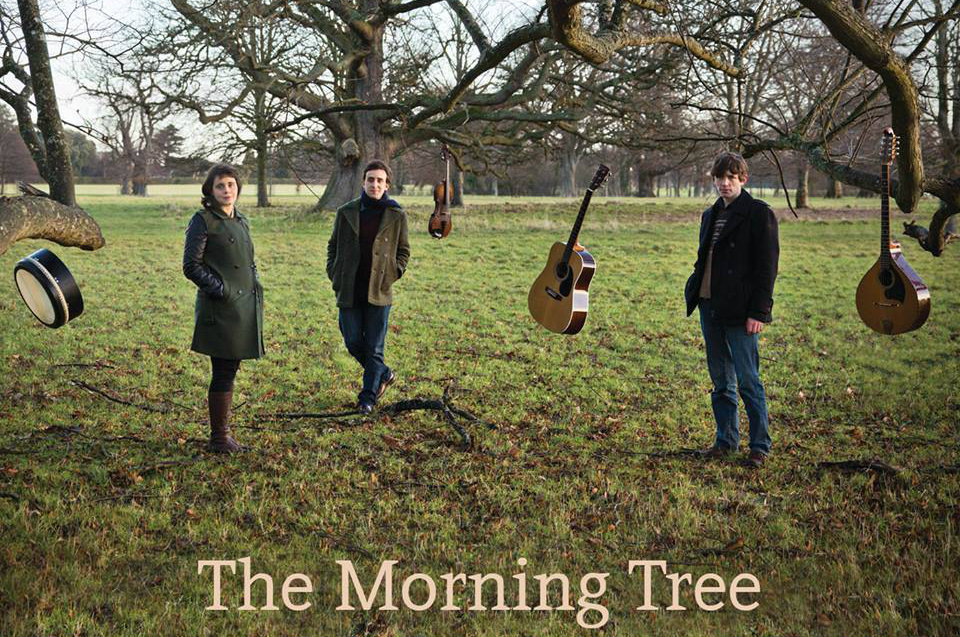 Some albums have a gentle understated nature that can ever so quietly entwine themselves around you. This debut by The Morning Tree is one such recording.  What you get are three musicians with drive, talent and passion, and with those ingredients a little magic can happen.  Their music grabs your attention from the first track and keeps you listening throughout.

The Morning Tree members are Consuelo Nerea Breschi, Matteo Podda and Eoghan O’Shaughnessy. Their music is an intricate mix of folky blues material that draws heavily on the Irish song tradition while still delivering a little extra. The dueling, twinkling string work that underscores most of the material is finely arranged and delivered in such an appealing way that the vocals can easily rest upon it.  Likewise the balance of instrumental intros and breaks on the various tracks really work.  The musicians aren’t coming from the same musical place as many of their contemporaries, with the Italian/Irish mix, opening up some new avenues of expression. We spoke to Eoghan O’Shaughnessy about The Morning Tree and asked how they got together and chose the material.

“I met Consuelo for the first time at a folk festival up in the mountains in Italy” he says.  “I didn't speak any Italian at the time, but her English was very good. That was eight or nine years ago. She had already been to Ireland dozens of times and was in love with the music. Then in 2011 I left Ireland for Italy and found her and Matteo in a pub playing Irish music and it pretty much took off from there.”

They all wanted to start some kind of group but had no clear idea what shape it would take. Eoghan ended up bringing his guitar over to their apartment three or four times a week.

“We'd eat something, talk and then start playing” he said.  “Our repertoire at the beginning was mainly old-time and blues, we sang Cluck Old Hen and Wayfaring Stranger, and I did solo spots of some Robert Johnson blues. Cluck Old Hen was actually in the original list for the album, but we decided to leave it out because it made no sense with the rest of the music”.

“Consuelo has a great ear for melodies and anything she sings instantly becomes her own. One of the real reasons for starting the band was to get Consuelo out singing more, she's surprisingly humble about her voice and would often only sing harmonies.  Apart from Do You Love an Apple?, which came from Matteo, and Tá mé i mo shuí, which I chose, all the songs were her choice.”

The Morning Tree shows that appealing and accomplished albums can be recorded without big studio input.  It takes longer and is driven by passion, but the outcome when it works can be very satisfying. The result as they have shown is an outstanding album which predominantly comprises of songs. 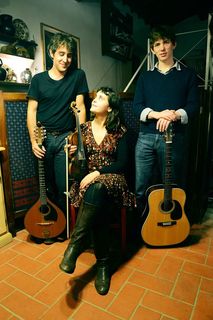 “I think all three of us count ourselves lucky beyond measure when it came to recording the album” Eoghan says. “We were just in the right place and knew the right person; Alessandro Fabbrucci. He was generous in every way possible, believing in what we were doing he offered us his equipment and his time to help us record. We just set up a makeshift studio in Consuelo's house and got to work. Between one thing and another it took well over a year to record completely.  We all lived separate lives and  travelled and worked so at times we would only get a few hours done on a Friday or if we were lucky we'd work right through Saturday and into Sunday evening. A lot of it was exhausting. But between Alessandro, and Mike Walker, who mastered it we got it complete.”

“The internet has changed everything for music makers nowadays. A decade ago the concept of raising enough funds from friends and well-wishers alone to produce and design a full album wouldn't merit consideration, people would have laughed at you. Even now I don't think people fully believe it, but it happens. I can't remember how long it took to reach our funding goal, but it was a few weeks, maybe three or four.

We raise the issue of the intricate string work and how they achieved it.  “We were very stubborn”, he says.  “There were times when I'm sure my first set of flat-mates were close to throwing either myself or my guitar out the window. Our arrangements generally took shape by Consuelo repeating a single verse of a song over and over while Matteo and I tried out different things on the guitar. Then we'd record it, take it home, and try to improve on it. The more we played the better we got, but I have distinct memories of us at the beginning just sitting for hours figuring out what kind of sounds we liked. When it comes to reaching the very soul of a melody, I don't think I've met anyone quite like Matteo. We've been playing together for three years now and he never stops surprising me”.

“I'd wanted to do something about Irish song accompaniment for a while. Guitar accompaniment in particular always seems to have had a very passive role, with Paul Brady, Daithí Sproule and Mícheál Ó Domhnaill being very notable exceptions. I had difficulty finding something from the past twenty years that really moved with the song, that wove around it and played with the melody, and I'd been dreaming about it long enough that in the end I just explained what I wanted to Matteo and Consuelo and they understood me straight away”.

"There were times when I'm sure my first set of flat-mates were close to throwing either myself or my guitar out the window".

We ask about influences. “From a traditional music perspective, the person who has influenced me the most was my father Paul, followed closely by my grandmother Pearl,” Eoghan says. “They laid the foundations for me and introduced me to the playing of people like Johnny Doherty and Francie Dearg. In my teens Caoimhín O'Raghallaigh gave me a big boost when he made me realise that there were so many different ways to play around with music. I bump into him once or twice every two years or so and I always come away with some new unexpected thought.”

“Consuelo as a singer has always credited her mother Mia as her greatest influence. Thanks to her father Antonio she grew up with people like Dolores Keane and John Faulkner coming to her house, and all three played large roles in her formation”.

"Every so often Matteo disappears away to France to visit his uncle, who I've never met but seems to be a great creative mind and a real source of encouragement for him. His biggest musical influence however is Woody Guthrie, he's just now finishing up an album of Italian translations of Ballads of Sacco and Vanzetti that I can't wait to hear. The eighties and nineties brought traditional music away in a very different direction from where it had been going up until then, and I suppose we were trying to take a step back and honour groups like Skara Brae and the Pentangle, musicians who easily stepped outside whatever limitations had been imposed and weave all kinds of different emotions into the music.”

The album is available on www.cdbaby.com/cd/themorningtree