Tommy Guihen was born and reared on a small farm in the townland of Bodorragha, between Keadue and Arigna in north Co. Roscommon. He began playing the flute at the age of fourteen and quickly became an accomplished player of the Roscommon/Leitrim/Sligo style of traditional flute playing. He won the under 18 All-Ireland title in Ennis in 1977 and the senior All-Ireland title in Listowel in 1978. He toured extensively with Comhaltas Ceolteóirí Éireann in the late 1970s, 1980s and 1990s performing in the UK, USA, Canada and Australia.

He turned down many offers to play professionally in the USA, preferring to stay in Ireland and live in his native area. Tommy never yearned for fame or promotion, but preferred to play his music for the enjoyment of local people at concerts and music sessions during the past decades. He played throughout the 1980s in counties Roscommon, Leitrim and Sligo with a local band called Shebeen. He has always learned tunes exclusively by ear. As a young man he learned all his music from local musicians. He admires the old individual and regional styles of older musicians which he feels are sadly in decline due to the wide availability of recordings and advances in technology.

In the liner notes, Tommy describes his early life and love of music: “My introduction to traditional Irish music began in my home in Boderry as a young child. It was there that I learned my first tunes from my father Tom and neighbour and uncle by marriage, Packie Leydon. I listened attentively to the radio when Céili House was aired. My hunger for learning new tunes developed at a young age.

When I first heard Patsy Hanly play on stage in Arigna Hall, I thought that I had never heard anything like it! He was undoubtedly the single biggest influence on my flute playing as a young man. I also remember as a boy the sheer pleasure that I got from listening to the musical, natural, flowing style of local Arigna man and flute player Packie Duignan. I loved his music, and later in life I played at many sessions with him in Paddy Mac’s pub in Drumshanbo, in the company of Patsy Hanly, Gregory Daly, Ben Lennon and Tom Mulligan. John McKenna's music was very popular in the area and I learned a lot of his music from the flute playing of Packie Duignan. I owe my appreciation and ability to interpret slow airs to Josie McDermott. He taught me my first slow air, 'Una Bhan', which is included in this recording. I enjoyed many musical evenings in the home of Tom and Lily Harte in Keadue, in the company of Josie McDermott, Tommy Flynn, Patsy Hanly and May Harte (Baxter). 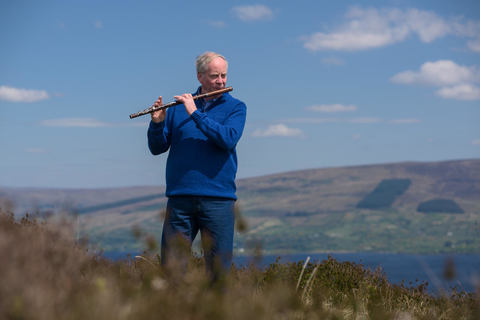 I was also influenced as a teenager by the powerfully driven, ornamental, lofty flute playing of Seamus Tansey when he used to play in the local pubs in Arigna. Matt Molloy's exquisite technique and overall musical perfection were enthralling to listen to on the radio. I would like to extend a special thanks to my first cousin Ger Ward, to whom I have remained grateful all my life, for driving me to the All-Ireland Fleadhanna in Ennis and Listowel in 1977 and 1978. Were it not for him, I might never have won the two All-Ireland titles, as my parents did not own a car.

In the 1980s and early 1990s I played with Kevin O'Brien, Pat Sweeney and Padraig Brennan in a group called Shebeen. Many memories linger in my mind of great nights of fun and banter and playing music until the early hours of the morning in Leitrim, Roscommon, Sligo and Galway. However, the nights that we played in Ted McGowan’s pub, the Róisín Dubh in Gurteen, are the ones that I remember most fondly.

When Vincent Woods, poet, playwright, local man and lifelong friend, offered to write a piece for this cover sleeve, I felt honoured and privileged. Vincent asked me to play at an event for visiting Americans in the John McKenna house in Arigna a few years ago. He introduced me to his friend, renowned musician, singer and lecturer Mick Moloney, originally from Limerick, now resident in New York. Mick could not understand why I had not already made a recording and instantly suggested guiding me through the process. He followed up on his commitment and the result is this CD. To Mick Moloney I will remain forever grateful. I owe a great deal of gratitude to Mary Corcoran for her piano accompaniment. Her experience in the recording studio, combined with her enthusiasm, were of great support to me. Sincere thanks to John Regan for his encouragement and specifically for writing the sleeve notes on the tunes for this CD. Paul Gurney needs no mention from me in the recording world. The high standard of this recording speaks for itself. A talented musician on many instruments and in many musical genres, his guitar backing on some tracks shows his sensitivity to the Irish tradition.

Lastly, but most importantly, I wish to dedicate this recording to my daughter Aela. I never sought fame, fortune or promotion. It is for you that I made this CD, so that you may have some musical memory of me in years to come. It represents the music that I played all my life. I hope you like it.

The Torn Jacket is now on release and can be purchased from Cló lar-Chonnacht. It is also available as a free download to Irish Radio Broadcasters that are part of our Download Centre here on Tradconnect. Contact us to gain access.