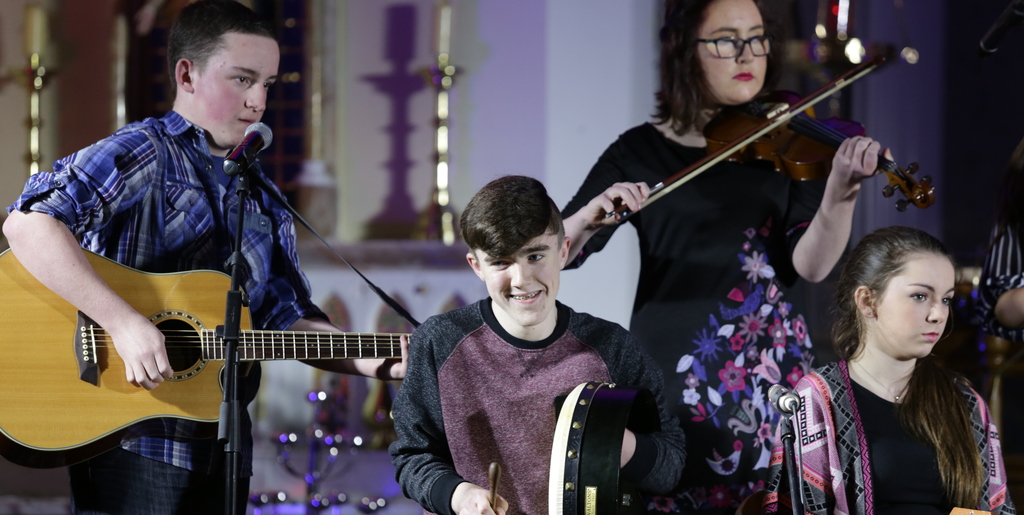 Carlow, 1 February 2017 – 10 renowned professionals and 108 Young Musicians from eight counties in Ireland will gather in Borris, County Carlow later this month to take part in Music @ Mount Leinster 2017. Now in its third year, this large-scale traditional Irish music festival will encompass three-days of music-making, collaboration, performances and informal seisiúns from Tuesday 21 – Thursday 23 February 2017. The young people will be hosted at Borris Vocational School for the duration of the festival, which is facilitated by Music Generation Carlow, supported by Kilkenny & Carlow Education and Training Board and Carlow County Council.

Over the course of the festival the young musicians from Music Generation partner programmes in Donegal, Carlow, Clare, Cork, Laois, Louth, Sligo and Wicklow will be guided by leading musician-mentors including Damien Mullane, Michael Rooney, Tola Custy, Liam Bradley and Aimee Farrell Courtney. They will be challenged to hone and develop their skills in groups and larger ensembles, culminating in a grand finale showcase concert on the final evening.

This remarkable festival has grown in scope and scale since its first incarnation in 2014. Born largely out of a strong culture of traditional music in Borris, Music Generation Carlow has now firmly established Music @ Mount Leinster as a significant and quality event in the trad music calendar. Workshops and masterclasses cater for intermediate to advanced young musicians, many of whom have returned year-on-year to forge musical partnerships across counties and to be inspired by some of the most respected musicians on the trad scene.

A showcase of music-making from some of the leading names on the traditional Irish music scene. Admission is on a first-come, first-served basis. Donations accepted at the door.

The young ensembles from eight Music Generation partnership programmes will perform to the public in their own showcase concert. Admission is on a first-come, first-served basis. Donations accepted at the door.