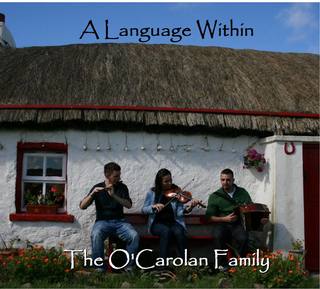 This is a track from an excellent new album by The O' Carolan Family from Derry called A Language Within.  The members are Karen, Ciaran, and Steven and they were born and raised in Derry and have been steeped in traditional music from a very young age.  We get a lot of music through our door and this is one that really stands out for its pure musicianship and beautifully paced delivery.  In addition to Steven on button accordion, Karen on fiddle and Ciaran on flute and whistles they have brought on board a dozen other musicians that feature on a range of the tracks.

Within this mix they deliver an astonishingly good recording. They describe their own music as "a distinctive blend and style that is unique in its own right. Their Style is somewhat shaped and inspired by the music and musicians around them, predominantly from the Derry/Donegal area. Their sound is distinctly influenced by Bands such as Altan, The Bothy band, Solas, De Danann and many other solo artists and musicians who they have crossed paths with."  Most of the tunes are original compositions including the track below called Sean McLaughlins/Eugene O' Donnells/Caoimhín Ní Dhochartaigh's. Outstanding music that we will return to.

where can I purchase this high class Album?