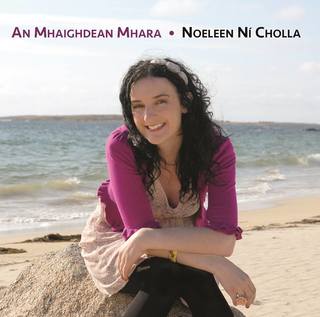 This is the opening track from An Mhaighdean Mhara by Noeleen Ní Cholla, an award-winning sean-nós singer from Gweedore in the Donegal Gaeltacht. There are thirteen tracks in all each with accompaniment by Manus Lunny. The album includes songs from the Irish tradition, the Scottish tradition and it contains a selection of songs in Irish, in Scots Gaelic and in English.

Noeleen Ní Cholla has been singing traditional songs since she was seven years old growing up in the Donegal Gaeltacht and has competed in singing competitions all her life. Gaoth Dobhair (Gweedore) is steeped in sean-nós (old-style) singing and in traditional Irish music. She inherited her love for music from her family, the older generation around her, her teachers and sean-nós singers in the locality.

Manus Lunny produced the album which is released on the Cló Iar-Chonnacht label. There are thirteen songs chosen by Noeleen and she sings each one with heart and emotion. Manus Lunny also accompanies Noeleen on the tracks on a variety of instruments. The power of the voice is woven through careful and considered accompaniment. Guest singers include Tearlach Mac Colla, Tormod Mac Fhionghuin and an Crann Óg.

On this track she says ‘I’ve been singing this song for as long as I can remember.  It’s a lively love song and it lifts my heart to sing this song with it’s light energetic rhythm.”

The album is available from Cló Iar-Chonnacht