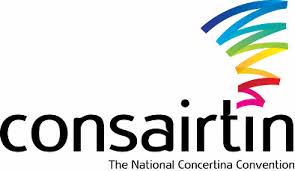 For lovers of all things concertina be aware that the first National Concertina Convention, will take place in Ennis, Co Clare on 10, 11 & 12 April.  According to their press release "Consairtín is a celebration of the concertina in traditional Irish music. The past few years has witnessed an exponential rise in the popularity of the instrument among traditional players in Ireland and the establishment of a national convention now provides a platform for enthusiasts of all ages to gather in an environment that will encourage learning, discussion, performance and fun.

Situated in the heart of Co Clare, where concertina playing has been an integral part of traditional music life for centuries, and where it is currently thriving, Ennis is an ideal venue for such a festival and the event will salute the instrument’s special place in the local musical landscape. Some of the most highly-regarded practitioners and teachers from throughout Ireland and further afield will gather to share their expertise and showcase their musical virtuosity.

The principal events of the weekend will include:

The festival directors, Tim Collins and Áine Hensey, bring many years of artistic and academic experience and expertise to this new venture. Tim is regarded as one of Ireland’s leading concertina players and teachers. He is a member of the Kilfenora Céilí Band and has recently completed his doctoral thesis in NUI Galway. Áine Hensey has worked as a traditional music broadcaster and arts adminstrator for more than 30 years and has also recently completed a doctoral thesis at NUI Maynooth.