Garry started playing music at the age of 9, learning the banjo, mandolin and guitar. After leaving school, he completed a Degree in Music and Irish at St. Patrick’s College, Drumcondra.Whilst in college he became involved in the Dublin traditional Irish music scene and this led to various trips to Europe.

Aged 20, he joined the crossover folk/pop band Reel, with whom he recorded and toured extensively around Ireland and the UK, enjoying three top 10 singles in the charts.Garry has been working as a professional musician ever since, touring and  performing with many artists including The Fureys, Stockton’s Wing and Gerry O’Connor. In 2005, he performed on banjo in the musical Ha’penny Bridge in Dublin’s Point Theatre. He spent most of that year touring in France with the successful dance show Celtic Legends II playing banjo, mandolin and singing, also playing in India and Morrocco with the show.

In 2006 Garry was a member of the successful Ragús show which toured Holland and Belgium, and has returned every year since. Garry then joined the exciting folk/trad group, Monto. They were signed to Universal records and played several festivals all over the world in 2008, including the prestigious Milwaukee Irish Fest in America. He also featured on several tracks on the recorded tribute album to acclaimed singer/songwriter Christie Hennessey, with such famous Irish artists as Christie himself, Christy Moore, Luka Bloom, Paul Brady, Moya Brennan and Finbar Furey to name but a few.

In 2008, following the break up of Monto, Garry joined the folk group Dargle who toured in Asia, Europe and North America in 2009.Much of 2010 was spent with Ragús in Europe and Asia, followed by touring France with the sensational new music and dance show, Irish Legends in 2011. During this time Garry also toured with Lord of the Dance star, Liam O’Connor and his show. 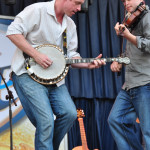 In early 2012 he joined the award winning Brock McGuire band, which was recently voted “Irish Instrumental Band Of The Decade” in the U.S.A, and has been touring in Ireland and North America with them since. He was also busy as a recording artist, working on albums for popular Irish artists including Tommy Fleming and Mike Denver.

In between touring in 2012, Garry recorded his long awaited debut album, Pickin’ Time, which has received critical acclaim from Gerry O’Connor, Irish American News, LiveIreland and American Public Radio, amongst others. The album was released in March 2013.