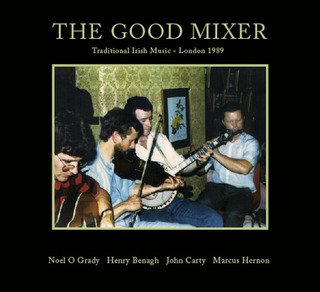 The album of the year for 2015 may well have been recorded 26 years ago, and were that to happen it would be quite an achievement. Give added consideration to the fact that there were no sound engineers, producers or the like present, and that it was recorded on basic equipment in the home of John Carty and you have quite a story.

The Good Mixer is a pub in Camden Town famous for its music. When a long time session at the venue came to an end in 1989 Noel O' Grady, Henry Benagh, John Carty and Marcus Hernon returned to John’s house and recorded their session tunes for the afternoon, as a sort of fond farewell. Bernadette McCarthy provided piano accompaniment.  Musicians were drifting back to a new and more prosperous Ireland at this time, and sessions such as this were ending.  What happened at day’s end is the classic ‘lost tape’ story.  The recording lay hidden for decades, unearthed only when someone enquired about it.

The quality of the recording is exceptionally high.  The quality of the music is even higher. This is four musicians at the height of their session life, playing music with a breathtaking fluidity.  This really is as good a recording as you are likely to hear. Playing together every week makes the music tight and compact and all four bring a vibrant energy and togetherness to each set with a calibre that is unrelenting. It’s predominately reels and jigs with tune names that are now so familiar.

To have been part of this music in 1989 would have been a treat.  To have a record of it now, after all the intervening years, is quite special. It captures both London, its music and musicians in a recording that has stood the test of time, and will be hard to surpass by any other recording that is released this year.