2015 in Review : Hidden in the roof: Uncovering Irish traditional fiddle music in Longford In 1962, Pierce Butler, a carpenter from Abbeyshrule, was working on the roof of Rooney’s pub in the local village, when he stumbled across a music manuscript hidden underneath. Little did Butler know at the time that one day its contents would help to uncover the rich fiddle tradition that once existed in the county. Upon opening it, he discovered that the names “Michael Leonard” and “Thomas Kernan” were written throughout the manuscript, with accompanying dates ranging from October 1844 to January 1846. Fortunately, Butler was also a fiddle player and, given his musical knowledge, the owner of the pub, Mrs. Rooney, encouraged him to keep the manuscript.

The next time that Butler heard the name ‘Thomas Kernan’ was in February 1973 when he was sitting down one Monday evening listening to a music broadcast on RTÉ Radio. Appearing on that particular programme was Fr. John Quinn (b.1940) – who was curate in Lanesborough at the time - and a local underage Céilí band that he was mentoring. On the show Fr. Quinn explained to the listeners that the band was playing music that he had taught them from a manuscript that was transcribed by Lawrence (Larry) Smyth (1866-1930) of Kilbride, Abbeylara (formerly of Killasona, Granard). Smyth, he added, had been taught the fiddle by Bernard Rogers (1856-1907) of Oghill, Killoe, who in turn had been taught by his uncle, Thomas ‘Blind’ Kiernan (c.1807-1887) of Cartron, Drumlish. Coincidentally, the week following this broadcast Fr. Quinn happened to visit Butler, who mentioned to him that he had heard his conversation on the radio and that he had an important manuscript to show him. In a similar gesture made by Mrs. Rooney to him, Butler gifted the manuscript to Fr. Quinn, who to this day remains the custodian of the manuscript in his current parish of Gortletteragh, Co. Leitrim. Research has since revealed that the manuscript was written while Kiernan was teaching the fiddle to Michael Leonard (c.1835-1886). At that time in the 1840s Leonard’s family owned the pub and it may be surmised that he placed the manuscript into the roof for safekeeping sometime before his death in 1886.

In addition to the two manuscripts already described, two more collections were recently brought to Fr. Quinn’s attention. The first collection was written by the aforementioned Bernard Rogers, when he was teaching one of his pupils, James McBrien (1887-1970) of Rossan, Aughavas, Co. Leitrim, while the second collection containing up to seven manuscripts dating from the period c.1860-c.1900 was written by successive generations of fiddle players from the O’Farrell, Reynolds and Brady families of Gaigue, Ballinamuck. The current owner of that collection is the fiddle player Mary Brady Hughes of Cullyfad, Killoe, who kindly lent the collection to me for further examination.

As a fiddle player, I have been member of Fr. Quinn’s Céilí bands since the early 1990s (I was taught by Enda McNamara of Aughavas who in turn was taught by Fr. Quinn). A key ethos of Fr. Quinn’s teaching is to revive the historical music that was once played in the region. For instance, when our U-18 Band ‘Ceolus’ won the All-Ireland Céilí band competition in the year 2000, our entire repertoire was sourced directly from regional manuscripts. Over the last few decades several students of Fr. Quinn have further disseminated this music through commercial recordings, publications, concerts and tutoring.

Encouraged by Fr. Quinn, I began a part-time Masters thesis in the Dundalk Institute of Technology in 2011 to examine the development of fiddle music in the region of north Longford from the period c.1800 to c.1975. Central to my study are the manuscript collections outlined in this article. As the research expanded, the thesis was transferred from a Masters to a PhD, requiring me to take a short sabbatical in my career in accountancy. In addition to the manuscripts, I am also examining a number of audio sources of Longford fiddle players that were recorded both privately and commercially. One of these sources is a tape recording that Fr. Quinn made of the fiddler Michael Francis McNerney (1898-1975) of Fostra, Dromard, in 1973. McNerney’s recording is of vital importance to my research, as his fiddle lineage can be traced directly back to ‘Blind’ Kiernan. The other audio sources I’m examining are the commercial records of the fiddlers Packie Dolan (1904-1932) of Aughadowry, Ballinamuck, and Frank ‘Patrolman’ Quinn (1893-1964) of Greagh, Drumlish, both of whom recorded in New York in the 1920s and 30s.

My research has identified the need for a public institution, such as the proposed refurbishment of Connolly Barracks as a cultural and civic centre that can ensure that the manuscript collections outlined in this article remain within the county, and also as central location to be used to promote the music of this region through the initiation of classes, summer schools and research facilities. Seán Connolly (1891-1921) himself was a fiddle player, having been taught by Francis McDonagh (c.1845-1935) of Kilshrewly, Clonbroney, who in turn was taught by ‘Blind’ Kiernan.

I am making an appeal to anyone reading this article to please contact me on the contact details below, if they are in possession of any music manuscripts, or information about fiddle music in the region, that may further aid the process of mapping the musical heritage of County Longford. Contact: conorward9158@gmail.com or 0877795879. 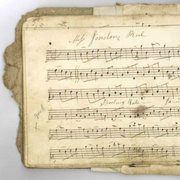 A great resource too is the work done by the McNamara family, N Longford/S  Leitrim. They have published CDs with some rare stuff on them