Featuring fiddle, vocals, piano, and accordion, Tadhg Ó Meachair and Joanna Hyde weave through an imaginative and expressive mixture of Irish and American folk musics on their debut album, One For the Foxes.

Award-winning instrumentalists in their own rights, this duo take a unique twist on the traditions from which they come, entwining traditional melodies, their own compositions, and songs from the broader folk canon.

This is Track 2 from the album, and original composition called Snowy Eldora.

Tadhg, from Dublin, is an All-Ireland champion piano player and has been touring the globe with the award-winning Irish group, Goitse. He is renowned for his ability create dynamic and invigorating arrangements for both traditional and newly
composed music. 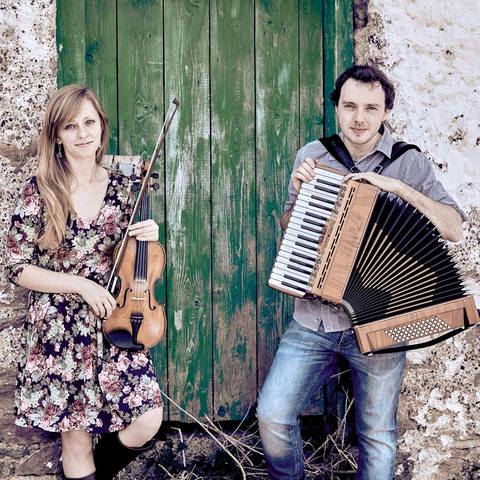 Joanna, from Colorado, USA is a versatile vocalist and fiddler with influences from both Celtic and American folk music. In 2011 she received the Jack Kent Cook Foundation’s Graduate Arts Award with which she pursued an M.A. in Irish music
performance at the University of Limerick. She has toured the USA and Europe, and performs with her award-winning duo, The Hydes.

Joining Tadhg and Joanna for some upcoming concerts is Co. Galway’s Dave Curley. Dave has been touring in the US since 2008 with Slide, Runa and more recently with Moya Brennan of Clannad, The Brock McGuire Band and John Doyle. A highly sought after multi-instrumentalist, he is quickly gaining notoriety for his vocal style, his compositions, and his percussive footwork.

The album is available as a free download for radio broadcasters through Tradconnect.