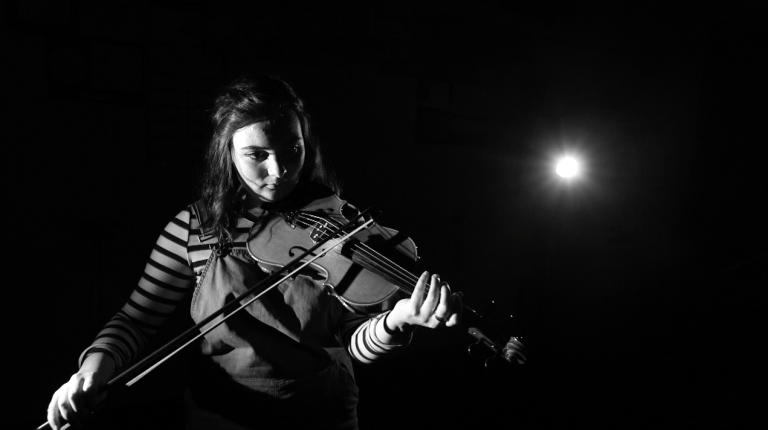 This is an impressive track by a young traditional/jazz group from Donegal called Snasta.  They met merely two weeks ago through a Soundwaves project. Soundwaves is a pop-up Summer project run by Wall2Wall Music in partnership with Donegal Music Education Partnership. It involves a series of intensive and creative weeks for those that participate and takes place between 20th July and 6th September 2015 in Letterkenny Co. Donegal.  It then leads to a concert on 6th September showcasing new and original music by brilliant young talent.

Snasta undertook a short interview with Soundwaves which is reproduced below with their permission.  You can read it on the Soundwaves site here. It is an impressive track that justifies the existence of such well supported summer projects.

Snasta – the amazing group of musicians fusing traditional irish music with jazz, resulting in their amazing folk song ‘Near and Far.’ There’s something special about this song, not to mention some superstar players in the group. We caught up with Eoin Orr, the incredible Uilleann Pipes player about the Snasta experience so far!

Where did the name come from?

Our name was brought up by accident, we were looking for new names and stumbled on the Irish word for ‘Snazzy’, we all really liked it and here we are now.

You met at the Soundwaves project in Letterkenny. How has the first two weeks gone? Was it what you expected?

We have to say that the first two weeks have really been out of this world, it’s great meeting new people but its ever better to find friends for life! None of us have expected to get this much out of it so far. It truly has been the best!

You wrote this song in 3 days, after just meeting each other! Did you find it hard to gel ideas or was it an exciting opportunity to write with people you just met?

What is your song near and far about?

Our song is about the ups and downs with traveling. We based the lyrics on the future and leaving your home for an exciting adventure. We used far out characters such as fish to show the theme clearly (The lyric “The fish come out of the sea taking me places I want to be” tells it all), but we also like to reflect on those left behind and that we will always miss them but we will never come back.

Tell us about the fish in your video!

In our video we use the fish as a colourful scene in comparison to the black and white of the start. We each created a fish with the help of Cheylene and we personalised them to kind of represent ourselves, all different and unique but all there for the same cause. It was also quite fun to decorate them but it got a bit too far when someone said “We can’t play music, we have fish to Choreograph!”

You have the most eclectic mix of instruments in a band I’ve ever seen! How did you find mixing the different instruments and styles of playing?

We have found that everyone has their own little world when it comes to music but if we look hard enough we can see that we have common interests and ideas. It’s just a factor of binding the ideas together on paper, playing it, and then just seeing what happens and repeat that process.

How does it feel to see your song have a video and be released so quickly after writing it? What’s been your favourite part of the process?

It feels unreal that our music is out there so fast from the first mental thoughts, to physical actions. It feels like we are the masters of our own fate. It just comes to show that hard work and dedication pays off (Also thanks to all those who helped us along the way like Rocky, Paul, Jeremy and Sarah)

For us we find that the videoing was the most fun, we found out lots of cool camera tricks and also got to do some acting, Dad Dancing anyone?

What’s next for Snasta and its band members?

As Ciaran says “I want to be famous”(as I say, “We already are!”) but seriously we think that the future is the future and we would like to think that maybe another track would come out of Snasta, as we have been messing around with a few things on GarageBand, we’ll see. To hear our music in the radio unexpectedly would only confirm our hopes and dreams!

Check out Snasta's new single ‘Near and Far’ on Youtube and Bandcamp today! Check out Soundwaves for more information on this project.