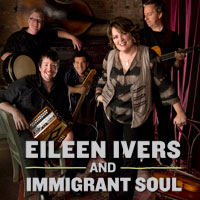 It is a rare and select grade of spectacular artists whose work is so boldly imaginative and clearly virtuosic that it alters the medium. It has been said that the task of respectfully exploring the traditions and progression of the Celtic fiddle is quite literally on Eileen Ivers' shoulders. The Washington Post states, "She suggests the future of the Celtic fiddle."

She's been called a "sensation" by Billboard magazine and "the Jimi Hendrix of the violin" by The New York Times. "She electrifies the crowd with a dazzling show of virtuoso playing" says The Irish Times. Ivers' recording credits include over 80 contemporary and traditional albums and numerous movie scores. Her latest CD, entitled 'Eileen Ivers & Immigrant Soul' continues to display why Ivers is hailed as one of the great innovators and pioneers in the Celtic and World music genres.

For other dates on this tour visit http://www.eileenivers.com