"Settle Out of Court" is the debut album by John Carty and daughter Maggie Carty. John is one of the most respected traditional musicians in the country and is going through a prolific period at the moment with the release of a number of outstanding albums. In 2015 he released "The Good Mixer", a recording of session music at the now famous London pub featuring  Noel O'Grady (bouzouki), Henry Benagh (fiddle), and Marcus Hernon (flute). Towards the end of 2016 he released "Out of the Ashes" with Matt Molloy and Arty McGlynn, undoubtedly one of the highlights of the year.

Settle out of Court however is about the next generation of Carty’s and daughter Maggie quite confidently steps into the spotlight on both banjo and vocals. Accompaniment is provided by Shane McGowan on guitar, Dónal Lunny on bouzouki, guitar and bodhrán and Paul Gurney on bass. The fourteen tracks feature a mixture of waltzes, reels, jigs and slides with the inclusion of a number of songs that showcase Maggie’s unique voice.

The tunes on the album come from a variety of sources: from different musical dialects and from the Carty’s wide family of musical friends. Maggie contributes four songs on the album which range from old traditional numbers  like “The Nightingale,” to an American mining ballad called “When the breakers go back on full time.” Also included are unusual versions of "Down by the Salley Gardens” and “Lough Erne Shore.”

The recording offers an insight into a living and evolving tradition that spans at least four Carty generations.  The pair have a natural ease with each other and the sense of trust, honesty, unspoken understanding and fun in their music is evident.  Long nights playing together at home, and now on tour is evident in their playing. 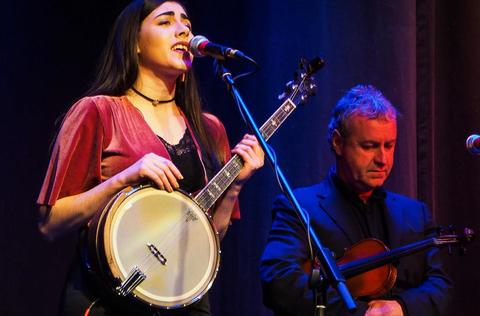 Regarding the recording John says that “any different musical combination requires the music to be expressed differently, as it is more of a conversation between the two players.  Shane has accompanied us on many of our gigs around Ireland and was the perfect choice for the album. The material was a reflection of the sets we have been building at our live gigs over the last while with additional material we are currently working on. Dónal played with us at the Milwaukee festival last year and volunteered his amazing expertise in a number of areas which we gratefully accepted. As always when recording with Paul, he is always ready to jump in and give a hand with a suggestion as was the case with his inclusion of bass on the ‘Breakers’.

The inclusion of the vocal tracks is a first on a Carty solo/duet album if you exclude his work with Patrick Street, At the Racket and the John Carty Festival Band. Maggie sourced the material and developed arrangements that allowed her to to re-imagine the stories in her own unique way - and this brings a broader and more appealing texture to the recording.  “It was brilliant to be able to include Maggie’s singing as she has been quietly building up a repertoire of songs and turning them totally into her own of late," said John. If you want to hear more, the album is now available to purchase on www.johncartymusic.com or download from www.cdbaby.com

Donal Lunny - Bouzouki, bodhran and guitar on tracks 3,6 and 9

All tracks recorded, engineered and mixed by Paul Gurney.

Inside photos and back cover - Marina Molada Miro

Produced and Arranged by John and Maggie Carty

Song Arrangement and Production by Maggie Carty and Dónal Lunny

Downloaded for airplay on Grassroots-thankyou