When Yvonne Bolton and Alan Jordan sat down to plan out an album they had one thing in mind.  They wanted to make an album that delivered something they could stand over.  It needed to represent their music and outlook in a tangible and meaningful way.  Traditional for sure, but comprising some of the material that had started to form the basis of their musical explorations over the previous years. It would be traditional with a slightly more contemporary feel. They released it earlier this year with the title Silver Threads

“We just wanted to do something that was personally satisfying for us” Alan confirms when we met him recently.  “Now that it is recorded we are working as hard as we can to promote it, and promoting something is a lot easier when you are proud of it.  We wanted to do something that we were happy with. Not in the sense that it was musically perfect or anything, just the creation of some melodies that we like. If we could present some arrangements that we liked and are happy to listen to ourselves, chances are other people would like them as well.” “Myself and Yvonne met on the music course at University of Limerick and that’s where all these ideas started.  We play regularly and do a traditional session in Limerick every Sunday so we’re used to playing together.  Making an album is of course a very different process.  We put a good bit of work and thought into it, and we were both pretty decisive about what it should be, so the decision to record was easy in the end. We were really getting a buzz playing together and writing our own tunes, so it seemed a natural next step.”

Silver Threads is an exceptional album that is fresh and invigorating and is something you will gladly return to again and again. It breathes life into Yvonne’s concertina, accompanied with great brilliance by Alan on guitar and low whistle. Playing together on the busy Limerick traditional scene developed a natural musical chemistry between them. This led to an exploration of some beautiful new compositions. Alan’s guitar work first came to prominence with another great band called The Outside Track while Yvonne had been busy on the session circuit as well as running her own music school in Laois.

“I played with The Outside Track for a few years.  As a band they would be better known in Scotland and the UK than they would in Ireland. I was one of the founding members of the group and appeared on the first two albums.  We all met at University of Limerick where we were studying music.  So after leaving that period behind me, this recording is my first venture or personal project. My own thinking was to record an album of original material.  Then Yvonne suggested we include some traditional tunes as well, and I’m glad we went with that. Their inclusion gives the album a more rounded feel. With our new material we wanted to put our own stamp on it.  That’s what I was really after.  It was a process of discovery in a way.  We didn’t want to record something we weren’t happy with so it was really through rehearsals that we found out what we liked and didn’t like. If we didn’t like something we said we didn’t like it. We really relied on our instincts quite a lot. With regard to the overall feel to the album I would say that the melody dictated the arrangements.”

We get to talking about some of the specific tracks. Alan explains. “On the first track called The Mermaid you have a couple of reels played at a steady pace with a kind of groove to them.  The melody sets that groove and I put some bass on it and we kept it at a particular pace.  We also included a new composition called Masacre de las Moscas that Yvonne composed while living in Granada, Spain. The Spanish influence really seeps into the track. Yvonne scored out the arrangement.  She has a background in classical music, which came to bear on this a little and it certainly helps in working out arrangements. Joe O Dubhghaill is a classically trained Cellist and also appears on this track.

In fact you could say we pushed the boundaries a bit with a few of the tracks.  There is a track called Dave & Pernille's Jig which has an unusual meter.  It moves between 9/8 and 6/8 time.  This is just how the tune came out.  It is how I heard it in my head.  I didn't set out with any time signature or meter in mind.  This track in particular proved a challenge to mix, as we use fiddle, concertina, guitar, bass, bodhrán and low whistle.  It's also tricky for the fiddle and concertina because of the key signatures. 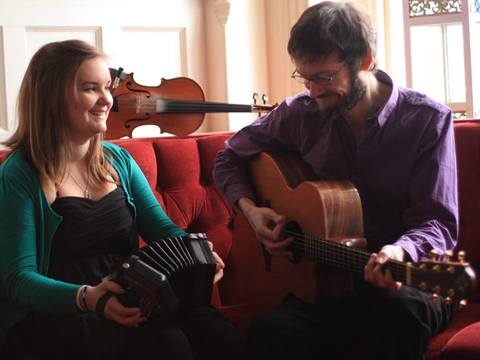 The Dreamer was a tune where our eclectic musical backgrounds come to bear.  We brought in Matteo Cullen who is a jazz/funk/classical player.  While we wanted control over the album as a whole we delighted in giving Matteo free reign to just go for it when it came to the piano work on this track.  We had initially got bogged down in mixing it and realised that it needed something else.  That’s when we thought of asking Matteo to help out.  Again, we would think along the lines of simply making music that sounds good to us, rather than being too constrained by traditional tune structures. The fact that I knew Matteo I was able to just give him that freedom. The instruction was that we wanted some piano improvisation here and he just listened to it and came up with his own thing. To have people like Matteo was priceless.”

Also included on the album are a couple of songs that break the tunes up nicely. One is a traditional song called Black Waterside. Alan explains that that it is “ in the key F# mixolydian, which means that it was a bit awkward for the concertina; lots of sharp notes; wouldn't be too common in traditional music.  I play in drop D tuning for tunes and open D tuning for songs which seems to work well for fingerstyle accompaniment.”  The other song is a self-composition called New Road. “It's a song that means a lot to me personally, but I wrote it about 13 years ago, so it's not that relevant to where I see myself today.  However, I realised that it captured a certain way of being that was (and is!) very familiar to me, and so I'm glad we went with it, as opposed to a more current song.  It's essentially a song of existential wondering and uncertainty, and I don't think that ever leaves us; we just learn to deal with it better as we (hopefully!) mature.  I like the guitar work on it too.  I go through phases of writing, of really focussing on it, and then I go through phases of leaving it for a while.  I write normally with the whistle, guitar or flute.  I would write the notes to whatever melody comes out.  I would generally flip between writing notes and playing some melody.

We recorded mixed and mastered the whole album in three and a half days. It was good going.  The first day we were in there, we were very prepared. What we did on the first day was what we had planned to do, and on the other days it was more a process of discovery.  We were finding out what worked. We also tried not to be "overly clever".  We don't really go for music that has lots of stops and breaks and changes.  I like music to flow and to communicate some feeling.  I am rarely moved by overly complex music that tires my brain out trying to understand what's going on.  Complex music can have plenty of feeling too, but it can lack feeling and flow when it's clever for the sake of it.

I like music to flow and to communicate some feeling.  I am rarely moved by overly complex music that tires my brain out trying to understand what's going on.

We had a number of launches already and playing some of the tracks live presents a new challenge. We try and stick to just the two of us for the live gigs which means you can’t replicate some of the arrangements from the album in the live setting. We have been getting very positive feedback from people who have listened to the album and people came back to us and said they preferred the live setting.  It brings a new energy.”

Playing live gigs is essential in the promotion of albums either current or newly released. So how important is it to an artist to recover the costs of making the album?  “It is essential to it” Alan explains. “I would try and have a practical head on me in that regard and it’s not easy to make money from music in general. You can’t make a loss and hope to keep on making albums. We try and get it out as much as possible. Yvonne and I have a good working relationship so can agree what needs to be done fairly easily. I enjoy some aspects of it and have been enjoying doing some radio work. We were on Raidió Na Gaeltachta so I had to dig deep to remember some of my forgotten Irish. Clare FM have also been playing some tracks which is great. There is something about radio that I like. There is a community feel to it when you get involved with local stations as there is a reciprocal relationship that goes on.  The radio presenters like to promote the local people and local people need the radio so it can be a nice relationship that keeps the human element alive. It’s real human contact rather than just the online stuff. There is some satisfaction in that. There is just so much music out there at the moment that all coverage is great.  We use Facebook as well. I think it is probably the best way to promote music especially gigs etc.  It’s the easiest way to reach a lot of people.”

On the present state of the music industry Alan like many other musicians struggles to see where the future lies.  “I can see two sides to it. In one sense the music is so healthy with really good and talented musicians producing really great music. In another sense however there is less appreciation for music due to over saturation. I don’t really know how to work with these two positions. Something like You Tube can be brilliant but it does have a negative impact as it doesn’t give people an incentive to buy music.  I would have grown up buying lots of tapes and CD’s and at the risk of sounding old there was something about holding the physical product that was very rewarding. There was a real appreciation for it.  All the online and digital stuff is amazing and wonderful but it’s different.  I don’t think we have found out how to work with it yet, as musicians anyway. I’m certainly a bit confused about the best approach to take.

Silver Threads is now available to purchase on Bandcamp and you can visit their website yvonneandalan.com

This is a really great interview!!!