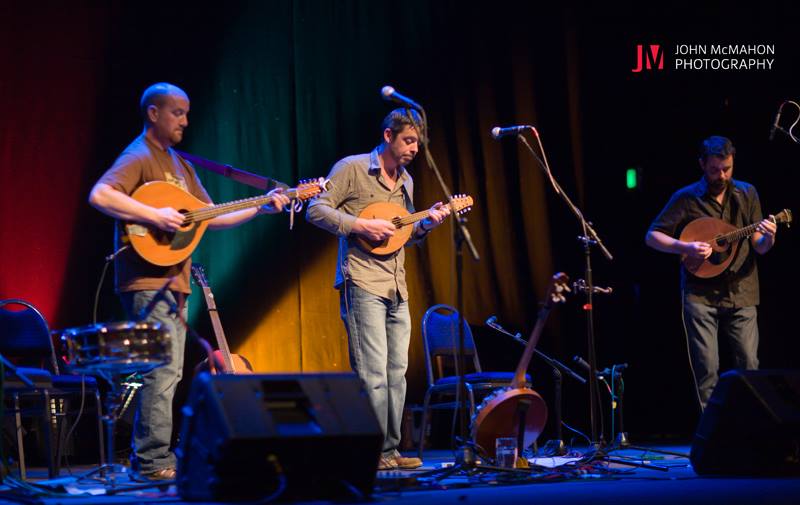 In June 2013,  Colm Naughton launched his new album called The Space Between The Notes at The Linenhall Arts centre in Castlebar, Co. Mayo.  He was on home territory and had an array of guests to support him on the night.  Bringing out a new album requires a lot of marketing and promotion and getting together a number of musicians to launch the event is part of the programme.  Colm is one of a new generation of musicians who have “done their time” on the session circuit and are now getting into the studio to put down on CD a recording of their music.  This brings with it a raft of other challenges that go with the territory.  Marketing, promotion and most important of all the album launch.  So what was it like?

“It was the first time I did a launch” he tells us when we catch up via skype. “It was an amazing night and it went so well, which was a great relief. There was myself and my brother Finbarr, and Patrick Ducey on guitar from Foxford.  Then we had my wife Orlaith and her father Matt Keane.”  Matt is brother of singer Sean Keane who was present for a second launch in Galway a few weeks later.  “We had a good crowd and I was happy with how it went.  We pushed it a bit with some on the ground promotion.  Matt’s name would be well known around Mayo.  We also play a lot as a two piece and we would cover a lot of Mayo so we would be fairly well known.  I started off the show myself with Patrick, and then my brother Finbarr came on with me and played a few more tunes. Orlaith did a few songs in the first half and Matt did a few songs in the second half which gave a nice bit of variety to the evening.  It was slightly different for the launch at the Town Hall in Galway.  Following these two we may even follow up with a launch in Gurteen, Sligo in September.”  These launches may put a bit of pressure on musicians, especially if it is a debut album.  While Colm is well known in the western counties his name may not be so well know further afield.  Promotion of a new album is critical to getting both his name and tracks from the album on the airwaves so that others can pick up on them.  Local and family support for these ventures helps he says.

So what other marketing and promotion ideas are required for an album launch these days?  “I would try to focus on the social media side of things as well, Facebook etc. I also videoed a lot from our first launch night which I have added to YouTube as well as my own website and Facebook.  I also put it on CD Baby and they put it on iTunes and Amazon and all of those other sites.  I was trying to find the avenues and places to target it.   You don’t expect to make a fortune out of it and if you cover your costs you are happy enough.  This way I have it available at gigs.”

Like a lot of new artists these days the idea of getting into the studio can often start years in advance of the actual thing.  It’s talked about for a long time and usually takes encouragement from someone else to push it over the line. “For me it wasn’t hard to get into the studio at all.  It was very easy because my wife Orlaith has just finished a CD herself and we spent a lot of time in the studio. We made the CD with Pat Coyne, a guitar player from around here. He plays in Sean Keane’s band.  Pat has a studio nearby and he was encouraging me to put some tracks down when we were doing Orlaith’s album.  He made it very easy to go in and do it.  It was a very relaxed atmosphere, and we didn’t set a timescale on it.  We just went in - a day here and a day there. Over the space of a year we managed to put it all together. “ Track selection is something that seems to come fairly easily for a debut album as the favoured tracks are the ones that have been played the most over the years of gigging and sessions.  “It’s something you don’t think about.  I just pick the tunes I like or have been playing for a long time.  It’s a way of weeding out tunes because if you play them over a number of years and you still know them and remember them they may get selected. So I didn’t even think about where they were from.  A lot of the time you would think they were Irish when in fact they were tunes written in America in the 1800’s, or in Scotland or elsewhere”

Does the album makeup and tune selection reflect session life in Galway where Colm plays most of his music.?  The inclusion of some American songs and Scottish tunes brings an international flavour to the album.  “It does to a certain extent,” he says.  “If you go to Galway and go into a session you could see 10 musicians playing and not one of them would be Irish. You will have two Danish guys, some Japanese, some Americans and a German and they will all be playing Irish music. Within that you will have all sorts of different tunes and influences.  Everybody knows everybody so it’s easier in that sense for people to get to know each other.  Purists aren’t too put out as long as musicians respect the music and the way it should be played. People are widely accepted for making an effort which is the important part.”

It was an amazing night and it went so well, which was a great relief.

Working with other musicians took a bit of scheduling.  Getting people into the studio to record their parts. “When you are making your own album and you want people to come in and play with you it is easier to play your thing and let them have a listen to it and play along with you. With the banjo I would have gone in and played it two or three times and picked the best track.  In essence you are trying to squeeze a lifetime of music into 13 tracks which make you really think about the music that has influenced you over the years.

We talk about the state of the industry and the number of recordings, festivals, music schools etc.  Are we reaching a state where there is simply too much happening.? “There is a danger of over saturation because it is so easy to make and record music now. There seems to be a flood of it all the time.  You have so many people across the globe now recording great music. It’s brilliant to see that the music is so healthy.  There was a time when you had the choice of six bands De Dannan, The Bothy Band, Stockton’s Wing and a few more and combined with a few solo musicians that was it. Your choices were very easy. To try and choose music now to listen to is a lot more difficult.”

For the future Colm is looking at a few other side projects including an interesting concept based around the mandolin family so watch this space. For now, read our album review of  The Space Between The Notes and visit Colm’s website www.colmnaughton.com