Interview : Dan Gurney of The Yanks talks music and inspiration 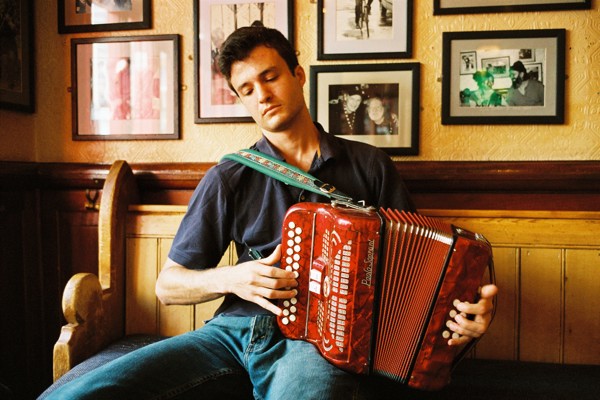 Dan Gurney is a New York based accordion player and member of The Yanks one of the best traditional groups to come out of the States in some time. Their debut album, also titled The Yanks, has established a notable record on Tradconnect.  Our review received over 1,400 views in one week.  Every single view is deserved because it is an outstanding album.  It was recorded in a studio over a 3 day period and was not over dubbed or technically enhanced.  It is old style traditional music of the highest order.  To support its launch the members of the band took to social media to promote and market it.  This approach was also a success with the album hitting the No. 1 spot on Bandcamp for a day at least, which is some achievement for a traditional Irish album.  To get to the bottom of some of these issues we spoke to Dan Gurney about his inspirations and approach to the music.  He is very clear that he and his fellow band members most definitely wanted to deliver an album of pure traditional music in the style of the masters that have inspired them. As a group it is also worth noting that they came together by chance.

“We were kind of thrown together”, he says.  “We played our first gig without even thinking that we would become a band.  We had a great time and it went well.  Then we didn’t play again for probably 6 months.”

The next gig was in New York City at NYU and following that, the idea of playing more often as a group developed.  When it came to recording the album they thought it would be fun to record it in the Catskills.  That was where they all grew up playing music so it made some sense to bring it all back home.  It was a small studio, with three walls Dan says.  They set up mobile recording equipment, sat in a circle and played.  No overdubs and little editing.  “I am happy with the way it turned out.” he says.  “It captured the vibe that we had in the studio.  It’s a little rough around the edges but captures the essence of what we would sound like in a session setting.  It was three days in the studio and we played from noon to 5 or 6pm”.

In addition to Dan Gurney The Yanks also include Dylan Foley on fiddle, Isaac Alderson on flute and pipes and Sean Earnest on guitar and bouzouki.  Their inspiration comes from many people over several decades.  The Pride of New York members were instrumental in the development of their music.  Dan talks with pride about their influence.  “We learned a lot from people like Joanie Madden, Billy McComskey, Brian Conway, John Nolan and people of that generation.  Before that we all learned from people very influenced by music in Ireland.  New York is a great place for traditional music because Paddy O’ Brien lived here as well as Jack Coen, Felix Dolan, Joe Madden, Mike Rafferty, and Michael Coleman if you go even further back”.

Dan knows and has played with some of his fellow group members for years.  “I’ve known Dylan Foley since he was 6 or 7.  I guess I would have been about 12.  So I knew him before he even played.  When we were growing up we went to listen to music at a place called The Radcliffe Hotel in upstate New York.  It was a concert series run by concertina player Father Charlie Coen.  He would have a concert on the 1st and 2nd Sunday of each month in this run down little hotel right on the Hudson river.  He would have Joanie Madden, Brian Conway, John Nolan and others.  A lot of people came up from the city and they would play a concert and have a few tunes afterwards.  So that’s where I grew up listening to this great music.  My parents heard about this concert series and started taking me there and I just got hooked on it.”

This rich heritage feeds into the style and feel of the music that they have recorded.  “We are mostly interested in playing that old style of music.  A lot of bands are getting trendy these days and putting synthesisers and bass and other things into the music.  That’s fine and can be entertaining, but for us we wanted to keep it old style.  We are not trying to self-consciously play in any specific kind of way. We really just sat down without much of a plan and that’s what came out.  I think we have all just put in a lot of years playing sessions and learning from the older musicians in New York, so that is just what sunk in.”

We ask about New York session life and if it is any different to Dublin, London or elsewhere.  “There are a lot of people around the city playing quite a lot, Joanie Madden for example.  She has Cherish the Ladies and tours a lot, and while she may not be out a couple of nights a week, we get to see her a few times a month in Manhattan.  A lot of people are also passing through the city which is great as we get to meet many of them.  There are people like Tony De Marco who plays sessions most nights of the week, as well as Eamon O’ Leary of The Murphy Beds.  I play every Monday at a place in the East village called Theatre 80 and Saint Marks, so all in all it’s a vibrant scene.”

On the state of the industry and the amount of music being produced Dan feels that more albums are not a bad thing.   More people can hear the music.  Commercially he feels we may be at a low point and while a lot of the bigger bands like Lúnasa, Altan and Dervish can tour successfully, it is getting tough for other groups to get gigs.  While the period post Riverdance opened up the music to a wider audience the market may have become over saturated.  Everything runs in cycles and at the moment house concerts are on the rise and doing well. These he feels offer a great opportunity to get in touch with your audience in a more tangible and intimate way.

Our chat turns to the issue of the internet and social media and how bands can use it to get their message out.  The online environment can help with promotion. Reviews and sound files can sit side by side. People can listen immediately and decide if they like it or not.  Download and distribution costs are significantly lower.  Despite industry pessimism, €10 or thereabouts for an album, still represents value.

We are not trying to self-consciously play in any specific kind of way. We really just sat down without much of a plan and that’s what came out.

“We released it without the physical product on a site called Bandcamp” Dan confirms. “We just put it on Bandcamp without any marketing and then went on Facebook and told all our friends it was available” The result of this simple action shows the power of networking and effective use of social media.  “On the day of the release we posted an audio link that could be played within the activity feed on Facebook.  So those posts got shared and got liked and probably thousands of people saw it on the first day, and a lot of them clicked through to Bandcamp. For the first day we used the Bandcamp option to allow people to download it and pay what they wanted.  A lot of our friends wanted to support us so we averaged $10 a download.  And so at the end of that first day it was just this flood of traffic from Facebook and we ended up getting to No 1 on the entire Bandcamp download chart for that day.  This only works at the very beginning when you have a lot of people that want to hear the album.  It’s a combination of people you know supporting you, and others hearing it for the first time.  A couple of weeks later you wouldn’t want to still be offering it for free as there is less urgency.  It’s a bit like a Kickstarter campaign and it gives flexibility to people.  It’s a lot more fluid then just having a set price that people have to pay.  We only got the physical copies a couple of weeks ago so they are now on CDbaby and our strategy is to have it on iTunes, Spotify etc.  We are never going to get rich off the CD but it’s good to have it for the live gigs.”

The lesson to be learned from the above is that good music sells and utilising social media in a positive way works. Go back 20 years when production and distribution costs were beyond the reach of only the major artists and you have to think that things have improved.  If you can play decent music and make a good record promotion through these new media channels is easier. Albums may not make and artist rich but are part of a range of tools available to musicians. We closed off our interview to Dan on that successful story and can only look forward to seeing The Yanks in an Irish venue soon.  Visits to Ireland by the members of the band are regular enough so that prospect will keep us going for now.  You can read what we wrote about the album and listen to some sounds on our album review.  Also have a listen and buy on bandcamp

I had seen each of the Yanks individually prior to their getting together and cutting a CD. Wonderful lads and solid players within the Irish Trad fashion. Each of the Yanks have a brilliant future and I am hoping they will consider a second CD soon. Great interview here too.