The first observation you make when talking to Garry O’ Meara is that he is a character. He has spent a long time on tour with various shows and groups and when we ask for some stories from all those late nights he simply says “They were good times” and laughs.  Mindful of the interview being recorded we move on from that particular line of questioning.  We are talking to him because he has just released his debut album called Pickin’ Time.   Regarding all those nights on the road?

“It definitely influences you.” he says.  “I was lucky enough with the shows that I played in. All the music was fully live. You were playing constantly and the musicianship on shows like Rágus was outstanding. That’s where I met the likes of Fergal Scahill and others and we just got on really well. It kept you on your toes? Fergal appears on a number of tracks on the album playing fiddle and is also better known for being the non-banjo playing 4th member of We Banjo 3.

“On shows like that it can turn into Groundhog Day a bit”, he explains. “But the musicians were great. At least you always had that. You could be playing off each other and spurring each other on. The more musicians you meet, and the more tunes you have to play for different shows the more it rubs off on you, and impacts on your own style I suppose. While Garry’s present repertoire has major influences from other genres his first introduction to music was The Beatles and Johnny Cash. 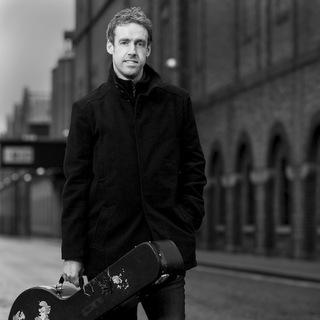 “My first introduction to music was on guitar.  We had one in the house when I was a kid and I just showed an interest.  I went to this hippy sort of a dude who taught me some chords and sang old songs by the Beatles and Johnny Cash long before I knew who they were.  My first introduction to music wouldn’t have been traditional as such. Then when I went into 3rd class in school the primary school teacher played the mandolin so that’s how I got into mandolin and banjo. He would have taught me a lot of O’ Carolan material.  I didn’t really get into the traditional tunes until I was about 15 or 16. I got into the local session in Ballyboughal, in North County Dublin where I went to school. I was playing the mandolin in a session and I saw someone playing the banjo. That was it. Then I went down to Milltown Malbay with the gang and I was absolutely instantly hooked on the traditional thing.”

Fast forward to the present day and our talk turns to his new album and in particular his own compositions, of which there are five.  We ask about the process he goes through when writing new tunes. “I wrote a lot in a short space of time. In a way I had this album and its release as an incentive. As regards compositions I recently got a new iPhone.  Over the years you would come up with ideas and you would never record them or jot them down. As a result they would get lost. Then all of a sudden I had the iPhone and I had the app that allows you to record as you go.  Some days you’d be just sitting there and playing and tracks like Stealth ( which features on the album ) would start to formulate in your playing. That tune came out of me in 2 minutes. I recorded it on the iPhone and came back to it a couple of days later after I had forgotten about it. At that stage I still liked it and it was developed further. For every one of those stories there were 15 that didn’t make it”.

The more musicians you meet, and the more tunes you have to play for different shows the more it rubs off on you, and impacts on your own style

“Tunes like Flying High which is a mandolin tune would be inspired by the work of American players like Mike Marshall and Chris Tile. They are unbelievable players and their music is really out there.  I was over in Nashville when I was playing with the Brock McGuire Band and I got chatting to a couple of musicians.  They would be laughing about all the stuff up and down the fret board.  Solos on top of solos.  Going over to the US and hearing this alternative music was very inspiring. People like the Punch Bros who are right at the top of the folk thing and are scary good on the mandolin.  They have a 5 string player called Noam Pikelny. He is up there with the Béla Fleck’s of the world. Influences like that. A full album of that music can almost hurt your head it is so good. Obviously I have listened to loads of Irish stuff as well, in terms of banjo players. When I was 8 or 9 my Dad had old vinyl records of the Dubliners so I suppose Barney would have been the first time I heard the dulcet tones of the banjo.”

The last 10 years have had a major influence on Garry’s view of the world.  He explains that if he recorded an album 10 years ago it probably would have been more traditional. “I’m sure it would have been different.” he says. The options of contemporary or traditional go back to the debate of Gerry O’ Connor or John Carty. For Garry a visit to Milltown Malbay where he came across one of Gerry O’ Connor's album for the first time had a big influence. It was the type of style that appealed to him, as opposed to some of the more traditional players. As a result, 20 years later his recording has a more contemporary feel.

We start to talk about some of the tracks on the album. Garry explains the background to the opening two tracks Pickin’ Time and Box Room Fantasy.  “I was playing around with the idea of using a four string banjo and a plectrum and trying to recreate the 5 string banjo sound, with that cross pickin stuff. The tune Pickin’ Time was born out of that. I was trying a few things and all of a sudden just a little rift came in the first part. There are three parts in it. The last part is more like a reel and the other two are more of a picking vibe. I got a little riff in my head and I went with it”.

Garry has included 5 of his own compositions out of a total of 12 tracks. He also includes some great old traditional tunes. “The likes of The Salamanca is a great old tune”, he explains, “one of the first tunes I learned and I probably hadn’t played it for a long time. I relooked at it and thought it’s a great tune. I think it’s important to get a good balance between old and new. It’s just a case of finding nice ones and revisiting them. As you can hear I make them my own with loads of variations and if anything I had to reign myself in.  When I decide I’m going to include a track I sit down and record myself playing it. It’s amazing the things you hear about your own playing that you are not aware of. I found it a great experience really knuckling down and disciplining myself to come up with a version that I was pleased with or happy enough with. It was trial and error. I sat down and recorded them just for myself and heard parts that I liked. This helped form a map of the tune.  Then I went in and recorded it and a few things happened that I didn’t plan. That’s important too as there is a danger you can over analyse things and it could become mechanical.”

There is nothing mechanical about the album and it is now on release and has been receiving great reviews.  Garry will be organising a number of album launches over the summer and we will highlight these as soon as the dates are known.  In the meantime you can also read our review of the album which we posted on TradConnect a few weeks ago.