Interview - Robbie MacGowran about his music and album "Basically" 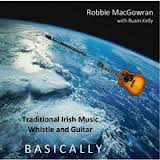 If you scratch the surface of traditional Irish music you can start to see the effect that the tradition and its music can have on people across several decades. The music can take a hold from a very young age and not let go for some considerable time.  It effectively becomes a soundscape to your life, providing points of interest along the rocky road to learning an instrument.  Memories of this journey live long.  We recently posted an album review of Davoc Rynne and his album The Humours of Ennistymon.  In addition we also added a blog containing the notes that appeared on his album sleeve.

Considering it took Davoc some years to record his first album (he is now in his 70's I believe) the recording was a landmark for him that will live as a testament to his life in music.

Whilst the big star names continue to push the boundaries of the music there are untold musicians who with little funding seek to get themselves into a studio to make an album.  One such musician whose music came through our letterbox recently is Robbie MacGowran from Dublin City.  He has recently achieved one of his ambitions, namely to record a whistle album. He called it "Basically" and for him it has been a long time in the making.

"I am playing whistle now for over 30 years" he says. "Mostly in local sessions in the Wicklow area. I work in the Dublin docks loading freight ships and actually don't come from a traditional music background. I got interested in traditional Irish music in the '70s while I was living in Dublin.  My brother had a number of albums by The Chieftans, Sean O Riada, Planxty and others and there was something immediately appealing about them. Liking what I heard I decided to try and learn to play a tune and the first piece of music I learned was actually from a song called "Sign on my Mind" by the '70s Irish band Dr.Strangely Strange. His first traditional tune was Tabhair Dom Do Lámh, which he learned from the "Black" album by Planxty. In the late '70s Robbie moved to Galway and it was there that he really got deeply involved in the music. During that time there was a vibrant traditional music scene in and around Galway and from this he started to absorb the music. "I practiced mainly on my own in my flat for about a year before I plucked up the courage to take the whistle to a session. The sessions I went to at this time in Galway were very open and I was soon playing regularly in Cullen's of Foster St., The Cellar Bar, Sean Ui Neachtain's and other well known venues.

"I met lots of great musicians and learned a lot from them. Many's the crazy session we had after hours on Eyre Square, or back in a house I rented in Canal Road. I played with the likes of the Lewis family, Mickey Finn, Fred Johnston, Pete Shaw, Eoin O' Neill and others and they really were great times". In the early '80s Robbie then did some busking around Brittany and some cities in Germany with a few other musicians. Eventually he moved back to Dublin and like many before him found the process of integrating into what was effectively a new city and music scene initially difficult. Time had changed the city and finding a natural home or session that lived up to the times in Galway and elsewhere didn't come easy. His music started to be confined to the house for a period before a move to Wicklow found the ignite button again.  Sessions once again came beckoning drawing him back into the music. Wicklow has of late become a good session location thanks in no small part to Tradconnect member Philip Maguire and his initiative to get a number of local sessions running in the town. He set up Wicklow Trad which has proved a major success with sessions weekly in Philip Healys and Ernie's bars in the town centre.

Robbie's instrument of choice was the whistle which he learned to play by ear, mostly self taught.  "I never got around to learning how to read music.  My new album which I called "Basically" is my second recording. My first was back in 1981 and it was called "Road Map of Ireland" and was recorded in Belfast with Outlet Records

"The new album is a totally independent production funded by myself. I recorded the tracks in a local small studio, mainly in the evenings after work. The recording engineer is my sons guitar teacher, a brilliant musician. The guitarist on the album, Ruairi,  is a friend I met at a session.  We actually didn't play much together before the recording or since as Ruairi lives in a different town and plays in sessions that I don't get to much. A lot of the tunes on the album I learned from recordings, others from musicians directly. Kitty's Rambles was learned from a whistle player friend, The Knotted Chord was learned from Bride Lewis during my time in Galway, Trim the Velvet was learned from the playing of Charlie Browne a flute player I knew and played with regularly in Cullen's Bar in Galway as well. The artwork for the sleeves is my own design and was simply created on a PC.

Cost wise Robbie states that "It is not really that expensive getting it to final stage and ready for retail but what I found expensive was promoting and advertising it. A half decent ad in your local paper can cost up to €150 and a lot more when you go for magazines and foreign papers with the cost applying only for one edition of the paper."  As alternatives to this he has been using the internet a lot as a promotional tool, YouTube, The Session, Irish Music Daily , CDBaby etc.

Robbie's story is not all that different to hundreds of musicians around the world and should hopefully provide the inspiration to other members to get into a studio and record.

Check out the album on cdbaby : www.cdbaby.com/cd/robbiemacgowran

Note : If you have a story to tell why not drop us an email with some original content and we will follow up (time permitting)