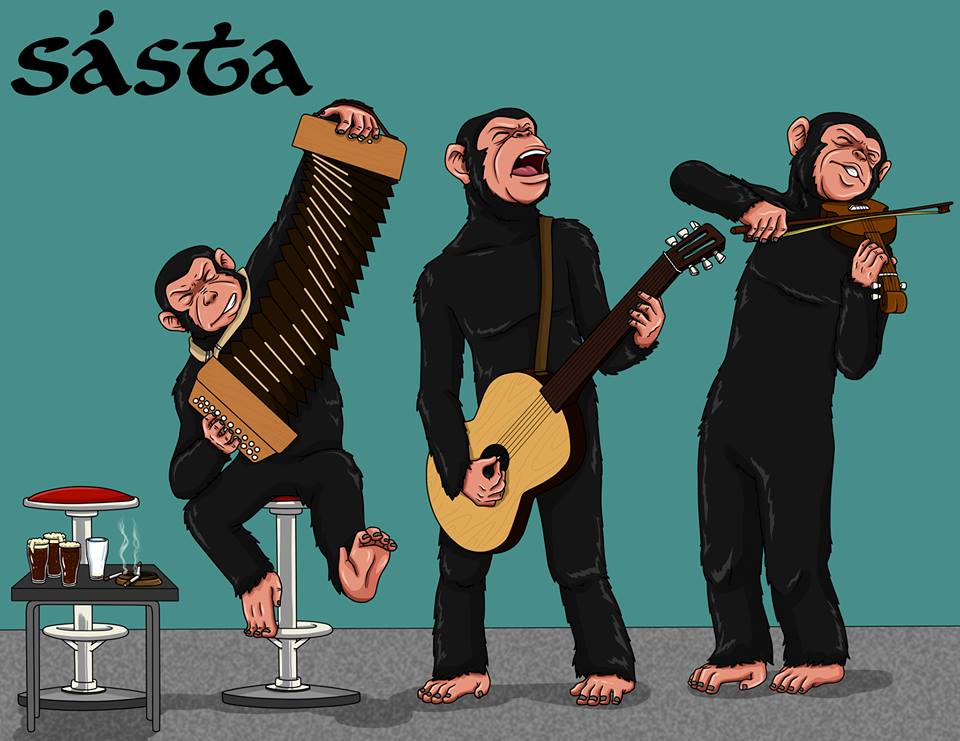 I came across the music of Sásta a year or so ago when they had their first self-titled album on release.  I had a Skype interview set up with guitar player Mick Hughes but the time difference introduced some difficulties and that interview went on the back burner. It is a sign of the times and a sad reflection of our economic woes that we are now once again interviewing traditional musicians who are plying their trade on the Sunshine Coast.  The music was bound to start drifting back to us at some stage.  Nothing wrong in letting the Aussies have a taste of it or indeed in giving the thousands of other electricians, plumbers and IT professionals that have emigrated a sense of home.

Sásta for those that don’t know are made up of Mick Hughes on guitar and vocals, Joe Murray on fiddle and Rocky Towey on accordion. Joe arrived in Australia in 2010 and Mick and Rocky had been there since 2007.  Like a lot of groups they came together via the session circuit.  Joe and Mick met at a session on the Sunshine Coast about 3 years ago. “We played a few tunes and swapped our numbers”, Joe says.  “I didn’t expect to find a top quality guitar player on the other side of the world. Mick asked if I would be interested in starting a band and of course I was. I had originally planned to work for a while and travel around Australia for a year but anyway, here I am 3 years on”. With thoughts of forming a group now starting to gather momentum Mick organised a session in Brisbane to see if they would work musically as a group, if the required chemistry was there.  “I met the other boys for the first time and I knew straight away we were on to a winner” Joe says.  “We met at 11am in the morning to play for a couple of hours and finished at 7pm full up on tunes (as well as Guinness and whiskey).”

From this Sásta started gigging as a band and in 2012 recorded a debut self-titled album which we covered on Tradconnect back then.  Of course we weren’t expecting a new album so soon. However last month we reviewed Pure Wreckín’ Match which has turned out to be a very strong second outing.  Rocky says that it was pretty natural to go back into the studio to do a second album.  They had a lot of material that they knew was good enough to record.  He also felt that it would help them to focus on developing new material for their live shows.

“The plan for the new album was to keep our trademark wild fast tunes and mix it with some more technical stuff, experimenting with different keys and harmonies” he says. “We also had our friend Kevin Higgins guest on the album, with uilleann pipes, whistles and flutes, which helped us give a different dynamic to our sound”

The album was funded via “Pozible” which is the equivalent of Fund It or Kickstarter.  “It helps us as a band to connect directly with the people who like our music, who choose to pre-order albums” Mick confirms.  “Also, via the Pozible campaign, we were booked for private parties & acoustic gigs as well as full on venue gigs.  It really helped fund an album we’re really proud of. It’s a great way to get your music out there without trying to get ‘signed’ by a label, and of course you have more control as a band”.

Many in Ireland wonder about life in Australia and for our many musicians that have to face the prospect of emigration, the knowledge that there is lots of great music out there may ease the pain somewhat.  “There is a serious amount of Irish over here” Mick says. “We are in Brisbane and the Irish scene is great.  You kind of get to know everybody and even if you don’t know somebody you’d still say hello because you recognise each other.  The best thing is how willing everybody is to help each other out, in different circumstances, with work, money, accommodation etc. It’s really like one big family. We had Ciaran Fletcher (former all-Ireland banjo) guest with us not long ago in Melbourne & then at a big festival.  He’s based in Melbourne for now, so that won’t do any harm! There are some top quality groups around the place, the music scene in Brisbane is pretty good and there is usually a session on most weeks, although from what I’ve seen there seems to be a bit more music in the likes of Sydney and Melbourne where you could find Irish music almost any night of the week.  So yes, there is a great Irish scene here in Australia!”

I met the other boys for the first time and I knew straight away we were on to a winner. We met at 11am in the morning to play for a couple of hours and finished at 7pm full up on tunes.

Mick adds that “there are plenty of festivals here, many trad based. Also, there’s plenty of seriously talented Australian trad musicians with little or no direct connection to Ireland who would put you to shame really! Bands like Lúnasa & Altan touring here at the moment really help to put Irish music on the map.  We had pints with Ciaran & Martin Tourish recently and they seem to be enjoying themselves here alright! We supported Damien Dempsey a couple of times over St.Patrick’s weekend, and also played Hyde Park in Sydney to over 30,000 people, so there’s no shortage of an audience in Australia!

Their new album Pure Wreckín’ Match shows Sásta to be a band with power and passion and for now they are enjoying the sunshine and the music. Everything of course goes in cycles and with Ireland slowly turning a corner it may not be that long before all three are back on home soil.  For now they bring their own brand of high octane traditional music to the furthermost corner of the globe.  The album was released in February and can be purchased via their website www.sastaband.com

Purchase the album on CDBaby.com