In advance of the Carmel Gunning Festival of Irish Music and Song that takes place on August 5th - 8th 2015 here is an interview we posted some time back. "Introductions are sometimes unnecessary when words spoken honestly capture a lifetime of music in a single paragraph.  We spoke recently to Carmel Gunning about her life in music and her International Summer School of Irish music that starts in two weeks time.

“I am extremely thankful,” she says. “Irish music has been good to me down through the years. It has sustained me through the good times and the sad times. I have met some wonderful people along the way, having travelled widely as much as time would allow, teaching, adjudicating and performing. My pupils past and present have made me so proud especially those who themselves are successful in their own right as music teachers and performers. My advice to every child or adult interested in Irish music is to learn an instrument or a song and it will give you great enjoyment, as being involved in music is "no load to carry". When you have music in your life you will never be lonely. I myself am happiest when I am  teaching or playing in a session or performing on stage. I am also thankful and appreciate the respect shown to me and the awards accorded to me over the years, for my work in the promotion of music, song and culture in general”.

Carmel Gunning this year celebrates 45 years in traditional music. She has been involved in music actively since 1969 - teaching since 1975 as Carmel Gunning School of Music and this is the 15th year of the Carmel Gunning Summer School. With a home in Sligo music has been the central theme in a culturally rich life.  She was born into a musical family in Geevagh, Co. Sligo. All her brothers and sisters could play and sing and it was obvious at an early stage that she was showing promise - picking up tunes from her Dad Tommy Nangle who was also quite a good singer. “My uncle Johnny Nangle  - a tin whistle  player living in London greatly influenced me too” she says. “I still remember his music making - his style being a sweet smooth legato phrasing of tunes. He still plays music at the age of 91.”

Her parents supported her by bringing her to various competitions and she won her first medal at the age of 10.  “Mrs. Conlon, my school teacher always prepared my class, who were part of the St. James's Well School Band for the Christmas concert.  It was held annually in the local parish hall in Geevagh and I always got a spot on my own on stage and I just loved that.” she says.   “At those concerts I remember hearing  great musicians like  Sonny Flynn, John Flynn, Josie McDermott, Phil McConnan, Des McDonagh, and others. Josie McDermott was a very talented man being a playwright, composer, singer, musician and music teacher and at "the drop of a hat" I had to play for his dancers during his performances as the musician in the play didn’t turn up in time. Josie whistled "Phil the fluters Ball" to me and I think I got through it alright as I could see that he was pleased with it.”

"My advice to every child or adult interested in Irish music is to learn an instrument or a song and it will give you great enjoyment, as being involved in music is no load to carry"

In 1975 she progressed to teaching, initially on a small scale.  “When I became All Ireland Comhaltas Champion and All Ireland Scor GAA Champion my classes grew bigger and some of those students have pursued careers in music as music teachers and performers” she states.  She also taught in a lot of national schools in Connaught and Ulster until a car crash put an end to all that travelling in 1998.  Thankfully she fully recovered from it.

In 1979, Comhaltas were auditioning for musicians and singers all over the country for touring purposes and the nearest venue  to her was Boyle where she was selected for the very first Concert tour of Ireland along with great performers like Joe Burke, Michael Hipkiss, Gabriel McKeon, Seamus MacMathuna, Paddy Fallon, Ann Mulqueen, Brendan Moran, Liam Farrell, Eamon Coyne and dancers Freda Gray, Maria Wogan and Philip Denmead.  “So my musical career was off to a good start,” she says.  “By this time I was composing  songs and music and they can be heard on all of my CDs.” In total Carmel has released 5 recordings. The Lakes of Sligo, Around St. James's Well, Carmel Gunning Sings Country, The Sligo Maid and Corran Hill.

Noticing a shortage of performance opportunities in Sligo, Carmel took the initiative to do something about it.  “There was no opening for young musicians to get together and perform in Sligo so I had the idea to form a junior Comhaltas branch.  After discussing this with Paddy Ryan, who agreed with me that it was a good idea, I formed a junior Comhaltas branch and named it after a relative of mine Fred Finn - a fiddle player of renown from Kilavil in Gurteen, Co. Sligo who had passed away in the 8O's.  Fred was the musical partner of flute player Peter Horan from the same area and their records are still very popular today.”

“As time would allow,  being a busy mum, I travelled to perform at various festivals and events in Ireland and abroad.  I later took up a position in the Coleman Centre in Gurteen as a researcher of folklore and continue this work to the present day. While I was there, I wrote two books on Irish music and song.”

This leads us to 2014 and her new group GROG and the continued success of her Summer School. We ask why she took the decision to go back out on the road as part of a group. 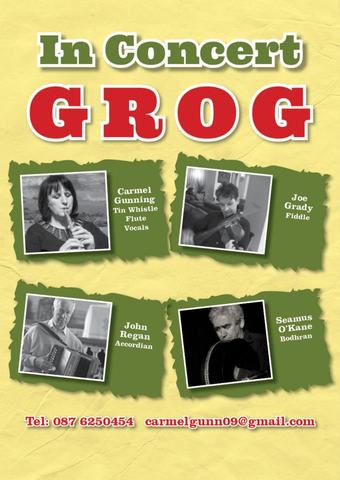 “I wanted to try something different as I had worked a lot as a solo artist, gigging, adjudicating, composing and researching and recording,” she says. “I picked  the members, John Regan, Joe Grady and Seamus O’Kane as I know their musical prowess and as well as that, they are very nice people and easy to get along with which is important when you are playing with others.  We enjoyed doing the Irish gigs and as all of us are busy in our musical careers, we get together whenever we can. I have also toured England with Comhaltas and America with the London Lassies and as a solo artist”.

“My summer school is in its 15th year and I enjoy organising it each year. As a matter of fact the numbers of people attending  Summer Schools and festivals have decreased in recent years due to the recession. There are a lot of festivals taking place in Ireland now which leads to smaller classes, which is great, as the pupils have a better chance of learning and having more time allotted to them during the classes. They also have access to different music teachers who have different styles of music and different styles of teaching.  This year I will be including a beginners class in tin whistle and a class on ornamentation/variation as well as the usual tin whistle, flute, mixed instruments and traditional singing classes.”

This four day event is in its 16th year and will be held from 5th August to 8th August inclusive.  One day workshops in tin whistle and flute will be given by the well known whistle player Angela Deane from Co. Mayo, Olivia McTernan, Sligo Town and Carmel Gunning from 11am to 4.30pm. Entertainment for the Summer school will be held in McTiernans Pub in Gleann, Conways Cross, Geevagh on Saturday 8th August with a singers evening starting at 6pm.  This will be followed by a rousing music session at 9.30pm. Special Guests are well-known singer from Seanan Lillis from Wexford, John Wynne the legendry flute player from Roscommon and one of Connemara's finest musicians P.J. Hernon as well as local musicians. All musicians welcome.

The 16th Annual Carmel Gunning Int. Summer School Festival for 2015 will be held from 5th August to 8th August inclusive, in Sligo. Classes and a programme of events will take place during the event in Sligo town. For more details follow this link.

The video below features a group called Doolin from France, featuring past pupil and whistle player Jacob Fournel as well as Josselin Fournel, Carmel Gunning and Junior Davey."