I met Kevin Madden many years ago on the London trad scene in the early 90’s. That was during our last recession when so many, myself included, had emigrated in search of work. It was no bad thing to be young and free in such a vibrant city.  Traditional music was very much alive.  At that time you could hear so many great players in sessions across the capital. I don’t think Brian Rooney had recorded at that time and listening to him up close was an eye opener.  Also the likes of John Blake, Lamond Gillespie, Emmet Gill and others were making their mark. Much musical activity centered around Brendan Mulkere and his music school based in the rather neglected area of Queens Park/Kilburn. The work of Marian Gill was also significant and I got involved in many of her  undertakings such was her huge appetite for teaching and organising events. It was through Marian that I encountered Kevin, long before he went on to win his All Ireland senior fiddle title.

At that time I recorded a lot of old tapes at various sessions and other late night events and I still have many of them.  One such cassette features Kevin playing, late into the night no doubt. I had to recover my old Denon cassette player from the attic to listen to it and it reminded me of how fast and furious some of those sessions actually were.  They were a world away from the very measured and composed music that surfaced on Kevin’s debut album that has just been released called The Sugar Loaf.  Sessions are not always a reflection of the music that musicians like to play, with many choosing a much slower and expressive form when it comes to recording.  We put this to Kevin when we spoke to him recently about his album.

“I know what you mean about the speed of the playing,” he says. “I think when we first came across each other I was playing for ceilis and in pubs.  The speed was part of the way that music was played in those environments.  Over time I have moved away from that and tried to get the rhythm of the tune to take priority over the speed”.

“Also the sessions in Manchester have always been played at a quicker speed than most, so it is something that inherently I have done without thinking about it. The CD wasn't really the driving force behind playing slower, this happened over time, but I have to say that the process of making the CD helped me see that playing quicker actually took away from the tunes and the ability to do things with it.”

Kevin states that his teacher always told him to play what was between the notes, hinting at ornamentation and variation of the bars.  He found that the recording process gave him the opportunity to step back, listen and make sure he was following his own advice.

“I do think that it helped make my fiddle playing better.  I could just let the tunes flow and the rolls became clearer,” he says. “I also had Gerry Conlon with me on the piano.  We have been playing together for nearly 30 years now and he is a massive player on the feis scene, where timing and speed are the absolute drivers and not so much the ornamentation.  Having him with me and using that theory to the benefit of the music really helped.”

I do think that it helped make my fiddle playing better.  I could just let the tunes flow and the rolls became clearer

There is also a starkness to the sound that has been achieved on the recording.  For the most part it is simply fiddle and piano. The sound that emanates however sounds distinctly of a much earlier decade. I mention that it reminds me of Kathleen Collins and he says yes “I wanted to get that kind of feeling to the recording without having a very heavy production with loads of different influences. I have to be honest, I have mentioned her album in the liner notes as being one of the best fiddle albums ever, even now despite all the other people who have recorded since. As you have mentioned this, I am hoping I have achieved what I set out to do. I also picked the tunes in this vein as I wanted to have some semblance of old style traditional music and tunes that have not been "over- recorded" either.” This raises the issue of other early influences on his music and style.  In terms of earlier albums, Kevin spent years as a teenager listening to Liz Carroll, Tommy Maguire, Noel Hill, Tony Linnane, Finbarr Dwyer and Joe Cooley.  “I think this has shaped my tune choice” he says. “Over time my CD of choice has been this older style type of music like Moving Cloud, and now one of my favourite fiddle players is Brian Conway, very much in the old Kathleen Collins mode. She has a lot to answer for!!”

I also know of Kevin’s interest in Eastern European music as he spent some time working abroad and ask why he has not sought to include some of that influence.  “I have tried to avoid the "fused" approach that has become popular and, I might be a bit old fashioned here but I am not convinced that adding the 5/8 and 7/8 beats of say the Eastern European music to Irish trad actually is progressing the tradition.  I find it is actually taking away from the traditional music and turning it into something else. I have no issue with it being done as I like listening to musicians who take this approach and I really like the music of Eastern Europe.  My only issue is I am not sure they should be played together. I am not sure what music this is becoming over time, but I do believe that the two are brilliant in their own right and maybe mixing them together actually takes away from the beauty of both forms.”

Like many albums these days The Sugar Loaf is a self-financed recording.  Kevin feels that the main challenge of making an album independently is cost, where you are fully funding it yourself and then trying to promote it yourself.

On the cost issue he says “I made sure I had the money set aside so I could bring it together as quickly as possible.  That way the album kept the same feel to it.   If you don’t have the funding together at once you could end up in a situation where it takes longer and the atmosphere of the CD could change over time. You then end up with two CD's in one, if you understand what I mean.

The promotion of it I find the hardest as this is purely a hobby for me and I am not out gigging all the time. Whilst I know a lot of people through going to Fleadh Nua and the All Ireland Fleadhs I haven’t attended as regularly as I would have liked over the last few years.  Family and work commitments have got in the way.  That makes it very easy for your name to be forgotten and you may become the CD of second choice over artists that have an established and recognisable name.” 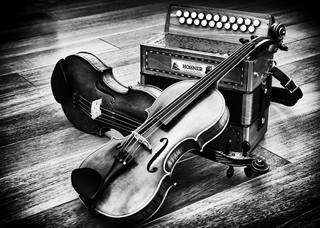 “Whilst the marketing and promotion of any item is basically the same as any other product you would sell in business, knowing where to aim the promotion is the difficulty.  I have had great help and advice from the guy who produced and recorded the album for me, a certain Mike McGoldrick, and help from many other unexpected sources as well. But I have found that the more you dig and find where to go to, more avenues open up.”

Kevin has already had a couple of initial album launches with more to follow at the Return to Camden Town Festival in October and the Inaugural Birmingham Irish Festival in November.

The album is now available for download at www.cdbaby.com and at iTunes You can read our album review and our official album launch article.