Interview with Matt and Shannon Heaton 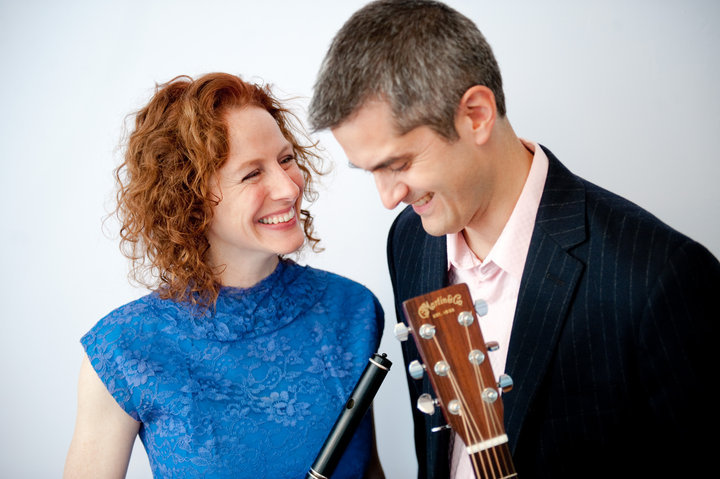 Boston residents Matt & Shannon Heaton have just released their 5th album called Tell You In Earnest.  We featured it on Tradconnect on 1st April as one of our Official Album Launches.  After their debut Dearga in 2003 they released Blue Skies Above in 2006 and Fine Winters Night in 2007. Lover’s Well followed on in 2009.  Their music is a mixture of folk and Irish traditional with traces of the great English folk tradition within the tracks.  Tell You in Earnest is a strong recording and is not dissimilar to Blue Skies ( 2006) and Lover’s Well (2009).  This time however they have sought material with a theme and hit on the novel approach of finding ballads that explore dialogue. For them, music has always been a conversation, be it a chilled out Friday night at home by the fire or the more focused studio discussions necessary to take them into a song or ballad. Each song on the album is therefore a to and fro discussion between a Knight and a maiden or a mother and son to pick some examples.

It’s an interesting theme because as a listener it immediately brings you into the song in a more intimate way. You find yourself keenly listening to the tracks to actually follow the story.  You quickly realise that while you have heard some of the songs before, their meaning or dialogue may have passed you by. All the tracks follow this conversational theme. To build on Matt & Shannon’s web savvy approach to connecting with their audience they released various video shorts that explained the songs. On one video Shannon explains the story behind The Gallant Hussar which is the first track to be released from the album.  They shared the track with us as part of our official online release of the album a few weeks ago and we include it again.

We ask Shannon what is it about a song that catches her attention and makes her want to record it. “Making music”, she says “is about having something to say - as a starting point. And then listening to the people you’re playing with, as they respond and guide the conversation into other threads.” From there she says you have to in turn respond to that, or go along with it.  “Putting together an artful, engaging arrangement of any song (or even set of instrumental tunes) is about allowing the music to really go somewhere. It might be bringing out a melodic idea to develop or a textual/story idea to bring out with melodic breaks, rhythmic feels, inventive chord shapes etc. Doing this with great story songs” she says “can be rich and rewarding.”

The physical recording of this album was easier than previous albums because they did it themselves. “We were the ones managing our own time, and defining our own standards. We've worked with some great engineers in the past, but the ease of not having to explain to someone what you want an instrument to sound like, or how something should be added was really freeing. Plus being able to try things without being on the clock meant we could take more time and rearrange the timeline when the music really called for it”.

Making music is about having something to say - as a starting point. And then listening to the people you’re playing with, as they respond and guide the conversation into other threads

Matt and Shannon met when they were in University.  Shannon was in search of a guitar player for a wedding gig and Matt was shortlisted for the job.  From there both their personal and music relationship blossomed as did their love for traditional Irish music.  Inspiration and teaching from the likes of John Williams, Liz Carroll and Jimmy Keane brought their musical understanding and appreciation ever onwards.  This eventually settled into a partnership that just seemed to work with Matt’s guitar and bouzouki work providing a strong base to Shannon’s flute and whistle playing.  Their love for songs and ballads provided a complementary element to their traditional repertoire as they explored music and harmonies. In 2001 they moved from Colorado to Boston where they are now very active on the music scene. With a strong back catalogue and a self-reliance in the studio their confidence in themselves as individuals and in their music has grown and is evident on the album. “We're definitely less worried about what other people might think” Matt says. “We've long struggled with the "identity problem" of being American musicians who play Irish music. There was a time when we might second guess a musical choice because it didn't feel traditional enough. But now we choose songs and tunes that really speak to us and we try to get the most out of each arrangement even if it means stripping it back to basics. In other cases (as in "Edwin of the Lowlands Low"), I added some spacey electric guitar for an intro bed. It's my way of evoking an older droney (pipey) sound that is more authentic to my own musical background, which has included a fair bit of surf rock guitar playing.”

Shannon throughout her early years also travelled extensively, living in Thailand and Nigeria for periods.  This also feeds into their song choices with the inclusion of a traditional Thai song. “Yeah, we were not shy about incorporating far flung musical tastes on this album” she says. “The Thai song on the album, for example, fits the criteria we laid out: conversation between two people. Real dialogue and beautiful human connection. It just so happens that it's in Thai. To many people this would be (and is!) weird. To me, it's a familiar song in the only other language that I really, really know. And Thai music is the first trad music I learned about. Being part of the Thai music scene in Suphanburi, Thailand when I was young was what ignited my love of traditional music - how a community of people can come together musically and socially/personally, by sharing a love of something that is way bigger and older than any individual musician will ever be. As time goes on, I am more and more grateful for the community part of traditional music. And I keep falling in love with traditional songs and tunes - I love the music more than ever. It's more exciting to me than, well, myself.” The Thai song that Shannon refers to is called Mon Rak Dawk Kam Tai and is one of the standout tracks on the album.  As a non-Gaelic speaker I listen to a lot of songs in Irish.  In a way the mood of these songs can be stronger because they’re unencumbered by words and you can let the melody or air wash over you.  Thai is no different and its inclusion fits well with the traditional material. While Mon Rak Dawk Kam Tai is one of my favourites we ask Matt and Shannon which tracks they are most proud of. “I really like Mrs McGrath,” Matt says. “I had to kind of fight for that one initially, Shannon wasn't totally sold because of the way the song is usually performed. But we really worked hard on the arrangement. It has huge emotional impact for me. Literally the first time we performed it was the night of the Boston Marathon bombing. We were on tour in Iowa, and had heard the news, so many people killed or maimed, for nothing. And in the song, the son has lost his legs, which is what happened to many of the victims of the bombing. It was very hard to sing that night, and I still have that association when I sing the song. When we recorded it, our friend Jared was able to add some snare drum, to evoke the military setting. I'm particularly proud of how the recording came out”.

For Shannon, Mrs McGrath and Mon Rak Dawk Kam Tai are the emotional peaks.  Mantle of Green was a surprising success.  “I was annoyed and feeling rushed when we were working on that, and I started playing this ridiculous, mocking musical break on the whistle,” she says.  “Matt looked at me with amusement and then encouragement. I kept going, altering it to be more musical. (We did have to do it a couple times before it came together. But that's how it happened.) Then Matt said "GO MAJOR!" for the last verse in the middle of us singing it. It was spontaneous and cool”

The issue of a husband and wife team at work and at home has to be touched upon and Shannon takes that question.  “It's like working without an extra person engineering your album” she says.  “Sometimes it's a little overwhelming, since you're both doing everything all the time (while also playing with play-dough with your kid). But in the end, it's direct, worthwhile, rewarding, and kind of romantic... except that you're always so tired...”

To close out the interview we decide to focus on the Boston music scene and their plans for a launch and tour of the album.

“We moved to Boston for the music” Matt says, “and every time the weather makes us think of moving away, we get another dose of all the fantastic musicians who call it home. There is an incredible straight-up traditional scene here and there are also a bunch of creative, trad-informed, excellent Pan-Celtic/Roots acts in town. For Irish sessions we love the Druid in Cambridge on Tuesday nights, or the Brendan Behan on Saturday afternoons. And you can hear amazing Bluegrass, new acoustic, singer songwriters, surf and jazz at little clubs all over the city (Club Passim, Lizard Lounge, Middle East). And a lot of us get together outside of the music too.  We recently went bowling with Ray LaMontage's music director/bassist, Josh Ritter's guitar player, the manager of Club Passim, and a Scottish harpist. It's that kind of town”.

Tell You In Earnest is available for immediate download or can be purchased at www.cdbaby.com. You can also read our official launch article.