On Monday 16th June Michael Mc Cague will launch his new album The Waylaid Man in The Crane Bar, Galway. We gave the album an online launch earlier in March and also spoke to Michael about the experience.  Not previously known as a composer it’s a stunning collection of new compositions recorded over the last 18 months or so.  Michael is better known for his work with the groups At First Light and At The Racket as well as being much in demand for studio session work.  This album was a step into the unknown for him and he expressed some relief when we spoke to him about the reality of making and getting a new album out.

“It’s great to finally have the finished article in my hands after what amounts to about 18 months effort that has gone into it” he said. “I never actually realised the mountain of work that went into putting an album together until I had to do it myself – even though I’ve recorded on numerous albums in the past! In hindsight, it’s been a lot easier just being a session musician (but don’t tell anyone!). My first day recording was back in July 2012 and the last day mixing was January 2014.”

Dealing with new material, namely the 30 new tunes he selected for the album, changes the process somewhat.  “A lot of work actually went into teaching the tunes to everyone and then teasing out a version of the tune that suited their instrument and style” he said. “So, in actual fact, these are already particular versions of my tunes according to who is playing them on the album!”

Guests on the album included brother Dónal on fiddle with Oisin MacDiarmada and Nollaig Casey providing additional fiddle support. John McSherry and Brian McGrath made up the rest of the team. For Michael it took a lot of careful planning to work out the recording stages smoothly, according to when his guest musicians were available. Brother Dónal recorded first and then John McSherry, as Brian McGrath and Oisin MacDiarmada were to be tracked on top of these recordings. It mostly had to be done by tracking as getting the likes of Oisin, John and Brian all free for long enough at the same time to rehearse and record together was not going to be possible.  Another requirement to make things work and to facilitate everyone was to record them somewhere convenient for the musicians.  “I ended up using 4 different studios, working mainly with Séan Óg Graham. So that involved a lot of correspondence between myself and the engineers and file sharing too”, he explained.

“I learnt such a massive amount in so many areas” he says.  “Engaging with great musicians and arranging with them and watching them record was really enjoyable and insightful. It was a privilege to be in a “fly on the wall” situation watching Nollaig and John record for example (like being let in on a secret!). The other main area of learning  was getting a handle on the presentation, promotion and distribution end of things. That felt more difficult than the music end for me! But I’ve met a lot of great radio people and media people as a result, either online or in person - really nice and helpful people that I would not have met otherwise.”

"Engaging with great musicians and arranging with them and watching them record was really enjoyable and insightful."

I put my foot in it a bit by asking why he left composing music until later in life, considering his youthful age.  “I think it’s different for everyone because it’s such a personal thing” he replies. “For me, I just never considered myself as being of that mould very much until recently. It would seem presumptuous to think of oneself in that way. I just had a voracious appetite for music of any kind and I suppose it just all eventually spilled over into writing snippets of melodies”.

“It’s also such a relative term “later in life”, too. I actually wrote my 1st jig in 2005 when I was 22 so I feel that’s fairly young considering you need to absorb the tradition so intensely before anything remotely meaningful can even attempt to regurgitate itself from you (not that I presume my stuff is meaningful at all !)”

“For me, I’ve spent years playing melody instruments before I even played accompaniment. I played fiddle, banjo, concertina and whistle and, as such, I had an innate understanding of the music without feeling the need to “understand it” if you get me? I didn’t worry about what it should be and just accepted it as it happens, as do all my friends. Because of that, I could learn and absorb without fear of being “wrong”. I also gained a fairly good insight into the sensitivities of each instrument from playing them and accompanying them.” 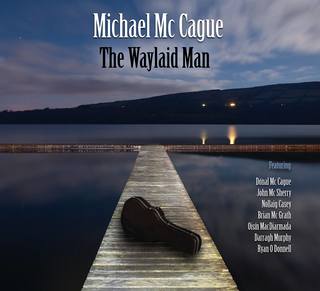 His ear for composition and understanding of musical forms also came from a rather broad appreciation of music across many genres. “I listen to a load of 40’s and 50’s swing and bebop jazz music such as Wes Montgomery, Miles Davis and Bill Evans and the likes of guitarist Tony Rice and of course one of my favourite players Arty Mc Glynn and I would be fierce influenced by their sense of space and structure in music.  I think some of that seeped into a few tunes (hopefully even slightly!).”

So how precious was Michael when it came to the actual recording of his music.  Was he able to let go and give free reign to the musicians “It’s hard for me to be objective about how precious I was obviously. I don’t think I was too bad! Obviously, you need to be precious in the sense that the tune presentation must represent how you feel about that melody contour, but at the same time, there’s not much point in getting fabulous musicians that you admire greatly to play your tunes if you can’t turn around and trust them with a bit of freedom too!”

“That’s the whole point of the matter and the point of music in general for me. I get so bored when I hear the same thing lashed out over and over. I love the random, unexpected twists in music and that I got from all the guests. It’s a very strange and tricky thing to let someone else represent your tunes for the first time in public as most people usually play them themselves. I was sometimes apprehensive that they might miss a really quirky turn in a tune and thus would make sure that it happened (although most of the time they got it anyway) but the greatest thing was when they took the tunes and breathed fresh life into them and surprised me with new things they played around with and just how much better they made them sound in general!”

“I don’t think it is harder being an accompanist in terms of writing music. I have just realised it’s a very different mindset I have as a result. There are pros and cons. The pros being that I have a good harmonic sense and knowledge of western music’s chordal patterns that I can lay under the tunes. Also, it means I would tend to be understanding of the difficulties of certain tunes being played on certain instruments and what styles may work or what tune suits a certain player because I’ve played a lot of music with people whose styles vary significantly. That bears itself out on the album where on one track I have Brian and Dónal playing an intentionally very old 1920’s style 4 part barndance and then on another I have John and Nollaig playing a Macedonian / Eastern type piece. It wouldn’t have made much sense to switch the tracks for these duets.”

“One thing I did find though, ironically, was that this was the first time ever that I had complete freedom and control over the music. In other scenarios people will sometimes help you by putting limits on what they want from you. Here, there were no limits on me and that comes with its own pressure and need for discretion. However at  the end of the day it is hugely gratifying to know that I could start, carry out and complete a project of entirely my own doing, in terms of composition, selecting appropriate musicians, arranging and recording. I guess you can look at it whichever way you like.”

Michael will have a Galway launch of the album at The Galway Sessions Festival in The Crane Bar on Monday 16th June and he will be joined by Brian McGrath and Dónal again for that one.  He will also be teaching guitar in Drumshanbo in July for the 3rd year now and playing sessions at The Soma Weekend the week before that!

The album is available for digital download through CD Baby, iTunes and Amazon and should be available in the usual retail outlets.

To Download the Album or to listen to additional samples click on either iTunes or CDBaby below.

To order a physical copy visit www.michaelmccague.com where you will find a store.