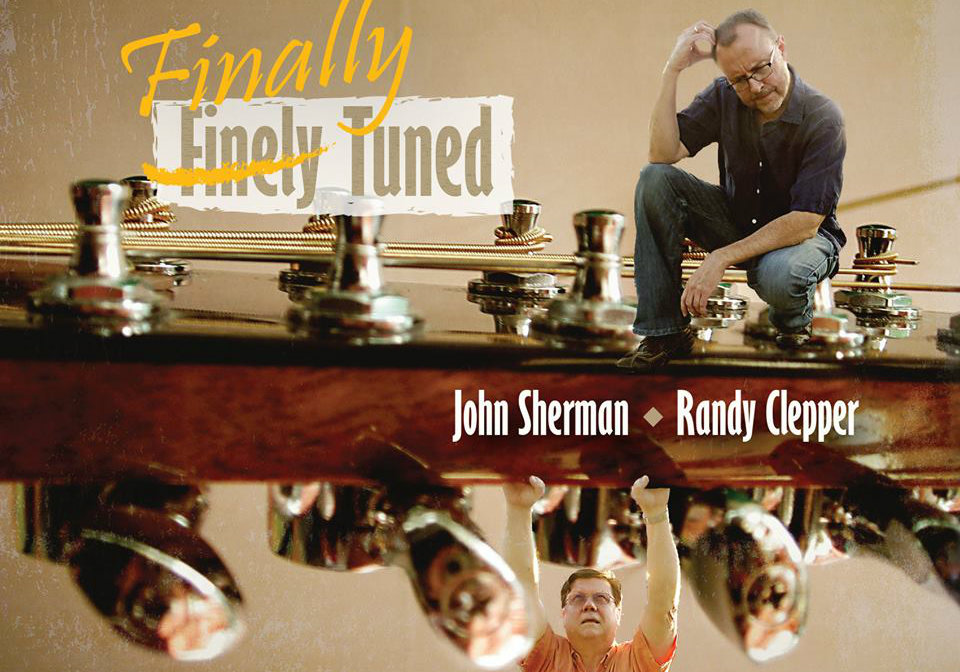 Last month we posted a review of Finally Tuned the new album by John Sherman and Randy Clepper.  They are two central Ohio-based multi-instrumentalist musicians who perform as a duo on bouzouki, fingerstyle guitar, and tenor banjo.  They have previously recorded solo and with other ensembles, but have (finally) released a duo album, "Finally Tuned", with John on guitar and tenor banjo and Randy on bouzouki and guitar.  The album contains traditional music with with a few modern tunes and one set with Galician and Italian numbers.  John and Randy pass the melody duties back and forth on many of the bouzouki-guitar and duo guitar sets.  The project is rounded out with tenor banjo sets accompanied by bouzouki.

John Sherman has arranged over a hundred Irish and Scottish melodies for the guitar. He has three solo recordings, "Farewell to the Creeks", "So Inclined", and "Far Green Country", two recordings, "Sounds from the Atlantic" and "Rainbands" with the Ohio-based band Innisheer, an album, "Links", with the Celtic group Silver Arm, and an album of Irish music arranged for two guitars, "Ceol Anam", with the late fingerstylist Carol Barney.  John has performed with uilleann piper Todd Denman, and as a regular accompanying guitarist for folk singer/songwriter Tom Paxton, and has opened for the Tannahil Weavers, Phil Cunningham, John Renbourn, and Green Fields of America.

Randy Clepper plays Irish traditional music on Irish bouzouki, fingerstyle acoustic guitar, tenor banjo and hammer dulcimer. He performed as half of the duo Begley’s Braes with Scottish harpist Christine Fraser Ramsey.  Besides traditional Irish music, he performed as part of an eclectic hammer dulcimer group Hammer On!.  Through connections with his Hammer On! bandmate Dan Landrum, Randy performed with the Chattanooga Symphony, with members of the Yanni World Tour ensemble and with aerial dance troupe Project Bandaloop. He has also recorded a solo instrumental album of traditional Irish music, “Within a Mile”, and an album, “Hammer On!”, with the band of the same name.

When we spoke to Randy recently he confirmed that “the project started out initially to be a solo traditional album with a few guest musicians.  I knew John from playing sessions around Columbus and from his book of tunes arranged for DADGAD guitar through Mel Bay Publishing back in the '90's.” he said.  “It felt a little presumptuous of me to approach John about playing on the recording since I learned a lot of my early DADGAD fingerstyle skills from his books.  However, he was gracious and interested in performing and recording together as a duo, and what was to have been a solo project quickly was set aside in favor of a team effort."

On the recording itself he confirmed that they wanted a very traditional feel for the album.  Most of the tracks were recorded simply, in a room together with no click track or overdubs. A few tracks were recorded separately.  All but one of the tracks were recorded in their home studio and were later mastered by Tom Boyer of GBS Records in Columbus, Ohio.  “We wanted the feel of just two musicians sitting in a room playing together” he said.  “The first tune set we recorded, Moving Cloud and the Mason's Apron, was done in a single take.  We thought, the rest will be easy.  It wasn't, and with a day job, family and other life events often taking priority, the project proceeded to stretch out over several years.  During that time, Pat Foley, who played bodhrán on the recording, moved from Columbus to Milwaukee, and so we had to arrange recording time around his schedule for when he was in town.  In the meantime, however, John's and my playing became tighter over time as we continued to perform as a duo."

"Most of the tracks were recorded simply, in a room together with no click track or overdubs"

On the structure of the album itself Randy states that "many of the arrangements on the album involve handing the melody back and forth between the two of us.  With both instruments (guitar and bouzouki) capable of doing double duty as melody and accompaniment, it makes this an artistic option.  Part of the challenge initially during the recording process was making these transitions seamless in terms of balance and volume.  Over time as we played the tunes together more, we found that it just became part of our playing style and that less was required in the mixing process."

The tune selections for the album are a combination of popular session tunes and tunes from other players whose music they admire.  The set we referred to in our recent album review is called to the Portland Set is a set of tunes originally recorded by Kevin Burke and Mícheál O'Domhnaill on their album entitled "Portland": Rolling Waves, Market Town and Scatter the Mud.  John initially put this together as a fingerstyle guitar arrangement and they jointly adapted it to bouzouki and guitar.  “Though our arrangement is a slightly different setting, the tune order comes from Kevin's and Mícheál's recording and we have a hard time imagining these tunes apart from one another.  We perform it as an homage to Mícheál who is no longer with us.  We also love Michel Ferry's tune, "Farewell to Chernobyl" and have a lot of fun with it and "Tam Lin" together in a set.  John likes to use his Led Zeppelin chords on that set."

Like ourselves Randy and John haven't found many examples of melody-based guitar-bouzouki recordings in Irish music.  “We wanted to stay true to the genre” Randy says, “even though this particular combination of instruments carrying melody is less common.  Both of us draw our musical inspiration from non-fretted instruments.  John has played fiddle and Highland pipes, and has arranged a number of pipe tunes for the guitar.   I tend to listen more to fiddle, flute, concertina and uilleann pipe music when learning tunes rather than to guitar or bouzouki, though I do sometimes borrow from tenor banjo playing.  Though we use what are common techniques for fretted instrument ornamentation - hammer-ons, pull-offs, and right-hand triplets, our inspiration for how these techniques are applied come mostly from other instruments."

Both feel fortunate to live in a city with an active Irish music scene.  “Columbus has a cadre of Irish musicians and a good session scene” Randy says.   “We have some stalwart musicians here that work hard to keep the music going and folks engaged.  We benefit as well from having the Dublin (Ohio) Irish Festival here, which brings in great traditional players from Ireland and across the US."

On Marketing and Distribution they are excited about the opportunities of distributing digitally in addition to CD sales, and of marketing via social media.  “Some of our earlier projects were only or primarily CD-based with reliance on email lists and newsletters.  We're very pleased so far by the amount of interest and support we've received through sites such as Facebook.  TradConnect seems like such a great fit for the combination of social media for human connection and artist promotion with the added benefit of a trad-focused audience."

The album is now available from www.cdbaby.com/cd/johnshermanrandyclepper