Interview with The Friel Sisters Prior to 2014 I knew very little of the Friel Sisters.  I had known their names but not their music.  Their album arrived in the post and I put on my headphones and played it.  It’s a little like the old days when you would try out an unknown artist at the listening post in HMV.  In the space of 2 minutes you would know if you liked the album and the decision whether or not to purchase was made.  These days our Soundcloud audio samples replace the listening post and give you a quick insight to the music.

So with headphones on I press play and within 1 minute I know I am listening to something special.  It’s a good album.  Others can argue the finer details but for me it has passed the test. I also think that some albums exude an unmistakeable warmth that is hard to define.  There is a certain down home connection that is made and in many instances this can’t be manufactured.  It’s there on the tracks.  Not knowing The Friel Sisters is great because I have no preconceptions, I only have their music.

On the strength of the album a chat with them is inevitable.  As their story evolves I start to notice a common theme that runs through their words.  It is evident that they love Donegal and its people.  As a county it has many places there that hold fond memories for them.  They make reference to the “special place,” to the “heart” of the county and to their Gran’s house where they recorded the album.  Anna says that the house “hosted generations of craic and ceoil in our family. You can feel that in the house and hopefully you can feel it on the album – especially singing family songs that have been sung there many times in the past.”  These are not glib words uttered just for the sake of a publicity campaign.  These words hold the secret to the “warmth” in their music that I referred to above. 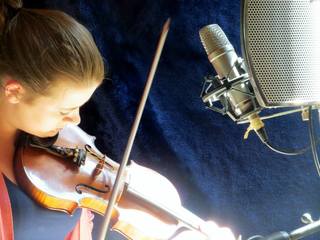 Their self-titled debut album released in January has definitely raised their profile and has brought them to our attention.  There is a recent trend towards recording albums in locations other than purpose built studios, and it is delivering some great results.  Many studios are in adapted houses anyway so the difference is negligible when you build in the quality of recording equipment these days. “Don’t be fooled by the recording quality” she says.  “It is exceptionally high thanks to sound engineer and friend Sean Keegan.”

She confirms that one track was recorded in Glasgow.  “Again at our house where we grew up” she says. The bulk of the recording was done over 3-4 days and was according to Anna “really laid back.”  “We hope it comes across that way” she adds.  “The recording was left running for a lot of the day so you can hear our awful chat between sets and sitting about – Sean has great bribery material! Some elements of it are actually used for texts alerts on our phones now – that bad!”

We ask about their background and how long they have been playing together? “Being siblings and learning alongside each other we know each other’s music inside out” they confirm. “Our first sessions were together, as were our first concerts. We’ve always played together – it’s pretty rare to see us apart at different festivals. Working with guest musicians Gearoid O Maonaigh, Seamus O’Kane and Griogair Labhrudh was a privilege as they’ve known us for many years. We met them along the way at festivals and sessions, with many a late night of music. Gearoid in particular has always encouraged us, as have the rest of the Mooney family in Gweedore. Gearoid’s father the late Francie Mooney always invited us in to sessions as kids/teens and taught us tunes.”

We comment on the very tight arrangements and sets that they play.  Again their long family history is a major contributory factor.  “As siblings when you know each other’s personalities so well it makes it easier to play like that but it goes without saying that there’s been a wealth of long nights of music together,” they say.   “We recorded the week after Scoil Samhraidh Willie Clancy which was great musically as the fingers were warmed up and tunes were fresh but it was tough on the voices.  Vocally we tend to get our songs from a family repertoire or from one source, so we have the same version of the song. If one of us learns a song we tend to sing it about the house – the other two can’t help but pick it up. The same goes for ornamentation.  We don’t sit down and consciously decide to sing a song in a scripted structured way. We had considered playing straight sets but it felt more appropriate to allow time for each instrument to get it’s time to speak, especially with it being our first album. Use of fiddle octaves is a natural technique in group playing in Donegal fiddle music so it only felt right that Clare adapted it to our sets.  We wanted it to be true to how we play as though you’re sitting in our home in Doire na mainsear with us.”

On the specific tracks they say that they “generally had a flow to them that didn’t cause too much difficulty.  However Contentment is Wealth was tricky as Clare swaps between a few instruments.  Also Sheila and Anna are playing on D instruments in a key really not well suited to D instruments! (Clare is thanked in the sleeve notes for this considerate setting of the tune.) We found it difficult to record vocally at first as we weren’t used to wearing headphones – we really rely on each other to sit in the right pitch…nothing to do with the fact we decided to play tunes in Huidi Beag’s pub in Gweedore until late o’clock the night before. The weather was glorious so we had breaks kicking back in the sun or going for rambles.  The biggest difficulty with the tracks was choosing 15 out of the 22 available.” The selection of tunes played were tunes they play quite often and they just fell together naturally they say. They weren’t picked for any other reason and were just a group of tunes they like from sessions or from musicians or albums which have influenced them. In terms of songs they wanted to make an effort to record mainly family songs – it was particularly important for them to record their Granny’s song Tir Chonnail.

“We are, to our knowledge, the first people to ever record it” they say. “In saying that however we do have a bit of an international flavour as on one of the tracks Sheila plays a Tibetan Singing Bowl. It provides a natural drone and being the piper she’s used to drones! The unusual instrument is usually used for meditation but we just love it musically. It was a gift from close friends and we wanted to feature instruments, tunes and songs that are important to us.”

On promotion they confirm that they have been kept fairly busy getting the album out but are loving every second of it. “We’ve been fortunate to get radio airplay across Ireland, Scotland, America and Canada and still get a buzz each time we hear that someone’s happy to play our tracks. Earlier in the year they filmed for the chat show Roisin on TG4 ( video included below) . We also launched at the Frankie Kennedy winter school this year which was an honour for us as we learned a lot of music and met a lot of lifelong friends there.  It’s also on our family’s home turf!  We also did Celtic Connections and a number of other launches.  We just want to enjoy the experience of launching an album for the first time.”

To close out they confirm that “The album is available online for digital download on iTunes, Google play and CD Baby. In CD form it’s available directly from our website or from Claddagh records, Celtic Note or Tambourine (Japan) It’s exciting to know that it’s made its way as far as Africa, Japan, America, Austria, Germany, Canada, France, the Netherlands and Spain.”