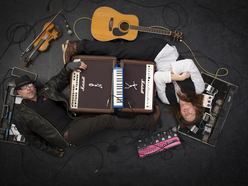 Here is another sample of some crossover music, this time with a sprinkling of jazz thrown into the traditional pond.  It's a self composition called Hornpipe 1. The group is called Cua and we came across them some time back with their  impressive mix of genres and styles. Cua are a duo and they have just released their début album this year called "Winter Tapes". They like to call themselves Atlantean by which they mean, "a kind of folk and roots style, encompassing our Celtic heritage and the influences of ancient music on later genres such as Jazz, Bluegrass, Appalachian, Americana, and a touch of psychedelic folk thrown in for good measure".

John Davidson has been involved with Global Trad Underground and spent some time in Nashville as a session musician playing and touring with bands such as The Mavericks, Abel Kane, Footloose, The Fields, Chad Wilson, The Space Cowboys. Shane Booth plays guitar and provides vocals. His previous and current musical groups include his folk-rock group Ceolaire, Global Trad Underground, Rhiannon & The Face Collectors, Judith Mok and her Hamsa Ensemble, Shanakua, Rain Dogs. "Their dynamic contrasting styles on Guitar, Fiddle, Melodica, Glockenspiel and Vocals works really well" and they have some impressive material on their Reverbnation page.  Hornpipe 1 is about as trad as they get with the rest of their material encompassing more Americana/Folk etc as on Get Along Home Cindy included below as well.  An interesting duo worth checking out. Visit their Facebook and Reverbnation pages for more information.