Summer is here, and with it comes the season of festivals, summer schools, concerts and masterclasses. The summer will peak with the annual Fleadh Cheoil na hÉireann which takes place on 12th - 19th August in Drogheda. Attracting over 400,000 people over the course of the week it is the biggest traditional festival on the planet. If you want something smaller and more manageable there is a lot to choose from including South Sligo, Doolin, Ceoil na Coille or the Joe Mooney Summer School.

Andy Irvine, John and Pip Murphy, and the actor Patrick Bergin are heading west for the 2018 Galway Sessions Festival, the city's annual celebration of traditional, folk, and roots music. The Sessions will run from June 13th to 17th, with a focus on the harmonica, known in the Irish tradition as ‘The Tin Sandwich'. Festival highlights include TG4 Musician of the Year Frankie Gavin (De Dannan) with Rick Epping (Pumpkinhead) in the Róisín Dubh. Other Róísín gigs include Planxty, Patrick Street, and solo folk legend Andy Irvine, and left-field and contemporary folk act The Spook of the 13th Lock as well as Landless. Visit www.galwaysessions.com

Taking inspiration from the great festivals of the 70’s and 80’s such as Lisdoonvarna, and from the deep musical roots of the county, The Doolin Folk Festival presents powerful music in an intimate setting and ensures that audiences and musicians can feel at one and just enjoy the communal spirit. The Sixth annual Doolin Folk Festival takes place from the 15th-17th June. Having established itself as a firm favourite on the summer festival calendar, Doolin is acclaimed for the diversity of its music programme and is filling a niche on the festival scene. Out here on the edge of the country, musicians and audiences are re-connecting and experiencing the unbroken but ever-changing nature of our rich and nourishing music. Visit www.doolinfestivals.ie

The best of piping and traditional music from Glengarriff, West Cork. Jim Dowling was one of a select band of young musicians who trained with the legendary piper Leo Rowsome at a time when traditional music was confined to the back streets and kitchens. Many people had begun to feel that there was a pressing need for a national organisation to promote Ireland’s unique musical culture. And so, in 1951, at the Dublin Pipers Club headquarters, the first standing Committee of Cumann Ceoltóirí na hÉireann was elected. Jim Dowling held the position as secretary for 12 years. Visit www.jimdowlingfestival.eu

The Bodhran Summer school is arranged around a series of classes given by some of the world’s best bodhran players and teachers but also includes special workshops relating to the instrument itself, and traditional Irish music in general. It takes place on Inis Oirr and every evening, music sessions are held in the island’s pubs, and students are welcome to bring their drum and join in. On two evenings, concerts are performed by two top-class bands. Visit www.craiceann.com

Cairde na Cruite, since its establishment in 1960, has played a central role in the revival and development of interest in the Irish harp. While its original objectives espoused the provision of expert tuition and the publication of music for the Irish harp, its mission has evolved considerably over the last 50+ years and the society has made a significant contribution to the development of a vibrant dynamic role for the Irish harp, and its positioning within Irish traditional music. An Chúirt Chruitireachta, their annual International Harp Festival, takes place in Louth from Sunday 1st July to Friday 6th July 2018. Visit www.cairdenacruite.com

Traidphicnic is back for the fifth year. This wonderful festival, celebrating our vibrant culture and traditions, will run in the Gaeltacht village of Spiddal from Friday 6th - 8th July 2018. Traidphicnic is a unique festival, with a ticketless system and a 'donate what you can' ethos, so they ask you to value the festival and what they are doing as a voluntary committee. It is not a free event. Three days are jam-packed with gigs, community arts, crafts, sessions, walks and talks, offering something for everyone.  Workshops in music and sean-nós song and dance, have a cover fee. Very much a family friendly event, bring your own picnic, sun and midge cream, thermals and raincoat!

The Willie Clancy Summer School is a week-long school and festival of Irish Traditional Music, Song and Dance. It provides tuition on every known traditional instrument and runs seminars and demonstrations on the Irish and English language song traditions. It also provides a week-long foundation course,  Dúchas an Cheoil, which examines the history and evolution of the Irish musical heritage. The tuition is complemented by recitals, concerts, lectures and conversational language classes. Visit www.scoilsamhraidhwillieclancy.com Ceol na Coille is growing rapidly year on year, with a mix of workshops, concerts, sessions and recitals, delivered by some of the finest traditional musicians in the world. A family-friendly summer school with an emphasis on the Irish language, the school also offers a Trad Camp for kids (10-13 yrs ), as well as improver classes and Irish language classes for adults and teachers. For information and bookings visit www.ceolnacoille.ie

NOTE : Video below is a 2017 promotional video

The Earagail Arts Festival presents the inaugural Donegal International Folk & Roots Festival – a celebration of folk, roots and traditional music from around the world, presented on the North West Atlantic coast of Ireland. Featuring over 20 different concerts, masterclasses and traditional Irish music seisúns from Friday 14th - 17th July 2015 in the market town of Letterkenny it is sure to be a success. Visit www.eaf.ie A packed programme of events includes nightly ceilis in St. Brigid's Hall and concerts featuring tutors, local musicians playing in the South Sligo Style, and visiting singers and musicians. Afternoons are equally busy with masterclasses, sean nos dancing workshops in St. Brigid's Hall and informal practice sessions led by summer school tutors. Visitors to Tubbercurry during the week of the South Sligo Summer School can expect to hear the very finest traditional music and to take away musical memories to last a lifetime. Visit www.sssschool.org

Every July the Leitrim town of Drumshanbo plays host to the award-winning Joe Mooney Summer School, a week-long festival of traditional Irish music, song and dance named after the man who did so much to promote the cause of Leitrim and his beloved town. The committee continues to emulate his high ideals, endeavouring to promote Leitrim's heritage of traditional music while handing on the best traditions of the past to future generations. Visit www.joemooneysummerschool.com

Meitheal Summer School 2018 will be held from July 23rd to July 27th at St. Flannan’s College in Ennis, Co. Clare. Students live and breathe music for a week under expert guidance. Includes masterclasses, arrangement workshops, composition workshops and a Trad Orchestra. During the week, students also attend concerts given by tutors and other artists with various workshops and presentations also taking place. Visit www.tradweek.com

Now in its 22nd year, Blas is a two-week intensive music, song and dance programme offered by the Irish World Academy of Music and Dance in Limerick. This combines the familiar concept of masterclasses in instrument/voice specific technique and repertoire, as found in many summer schools, but with small class sizes and the unparalleled level of student interaction with tutors that this can offer. Visit www.blas.ie 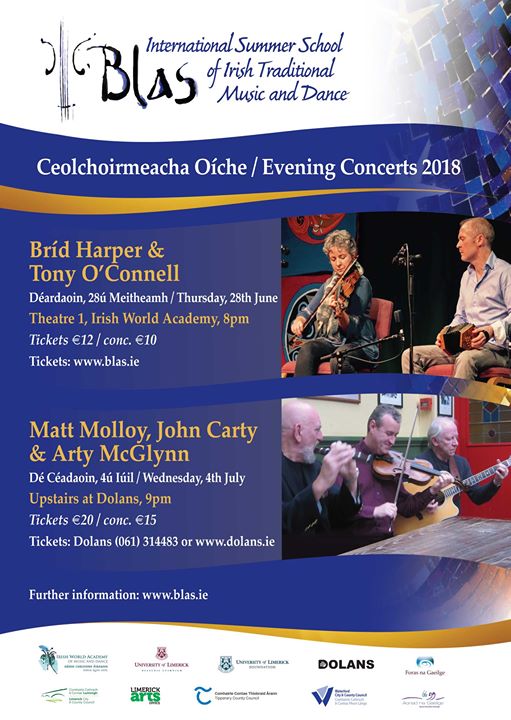 Scoil Acla is an organisation that provides teaching in traditional Irish music, arts and culture throughout the year on Achill Island, Co. Mayo. The highlight of the year is the Scoil Acla Summer School which takes place in July every year. In 1910 the first Summer School was established, and the event has been run every year since its re-launch in 1985. Scoil Acla offers excellent teaching in a range of disciplines for young people and older people and people with a diverse ability. There is also a workshop for writers, visual arts courses as well as our Irish language course!  Visit www.scoilacla.ie

The Festival was started in Keadue in 1978, to commemorate the famous Harper Turlough O'Carolan who lived in the area and is buried beside Keadue. Keadue is a small village of 200 people located on the shores of Lough Meelagh at the foot of the Arigna Mountains. The Festival includes concerts, ceili, tuition on the Harp, set dancing, Harp recitals and a Harp competition. Visit www.ocarolanharpfestival.ie

The James Morrison Traditional Music Festival is run during the weekend of the August Bank Holiday weekend and is sponsored by Sligo County Council. The festival commemorates the musical genius of James Morrison who was born in Drumfin near Riverstown in 1893. He emigrated to America in 1915 and became famous for his band which played in the Irish Dance halls of Manhattan in New York. He was also a composer and teacher of Irish music. He, together with Michael Coleman and Paddy Killoran (all from Sligo) introduced the “Sligo Style” of fiddle playing which has continued to be played in New York to the present day. Visit www.jamesmorrisonfestival.com

31 years ago a small festival started in the village of Feakle, County Clare. Feakle is at the centre of traditional music in Ireland. That small start has now brought them to their 31st year, with visitors from all over the world coming to a festival that now has international recognition. Feakle is the 'real deal' - it may not be as 'slick' as some festivals but remains true to its roots; the very best of traditional music in a very traditional Irish village. Visit www.feaklefestival.ie

This is the big one. Fleadh Cheoil na hÉireann is undoubtedly the biggest traditional Irish music festival on the planet, a week-long jamboree of music, song and dance, not to mention late nights and family fun! This year Drogheda is the host town for the festival. It attracts over 400,000 visitors to the host town every year and will take place from Sunday 12th August to Sunday 19th August. It will feature workshops for young musicians, competitions, concerts, céili’s and lots of fun on the streets of Drogheda throughout the week. Visit www.fleadhcheoil.ie

The Masters of Tradition opens its doors to the very best musicians in the land, presenting a series of performances that cover the full spectrum of Irish traditional music, in its most authentic form. As ever the Festival is headlined by Martin Hayes, the fiddler from East Clare, whose distinctive touch and extravagant virtuosity has brought the tradition to new levels. His famous trance-evoking sets with Dennis Cahill, who returns again this year, have mesmerised audiences all over the world. There are concerts each evening as well as Irish traditional music workshops, talks and masterclasses. The intimate performances take place in St. Brendan's Church, set in the heart of Bantry, and in Bantry House, one of Ireland's most striking 18th-century mansions, overlooking Bantry Bay. Visit www.westcorkmusic.ie/mastersoftradition/