This is an exclusive track off the new album by Sliabh Luachra masters Jackie Daly and Matt Cranitch.

The first tune in the set comes from Kiskeam fiddler Maurice O' Keeffe and the second is based on the well-known Stephen Foster song which Pádraig O' Keeffe made a two-part polka.  Jackie composed the third part included here, according to the liner notes. 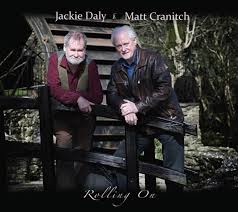 Jackie and Matt have delved deep into the music of Sliabh Luachra over the years and this album once again explores this culturally rich area on the boarders of northwest Cork and east Kerry. It's a beautifully observed musical portrait of a region and music that stands out so distinctively on the traditional map.

In total 15 tracks are included on the recording, dominated as you can guess by slides and polkas.  There are also 3 sets of reels and two sets of jigs with a couple of Set Dances and Barndances making up the balance.

To purchase visit Custys Music and