As a follow up to our album review of NUA, the first release by a new Canadian group featuring Jacob McCauley we thought it would be interesting to look in some detail at the four tracks on the EP.  They are complex multi layered compositions and we spoke to Jacob to better understand the creative process and how they as a band approached the recording.  You can listen and buy this EP at bandcamp.com and in conjunction with Jacob's thoughts you get a real feel for what goes into music like this.

The album is a collaboration with two other award-winning players, James M Law on fiddle and guitarist Graeme McGillivray. There is evidence within the music of external influences and it is here that Jacob’s rather unique Bodhrán technique and his experience in other other genres such as Jazz, Metal, Experimental and World Music come into play, allowing this new group to take the music in a different direction. In a long career Jacob has worked with some of the biggest names in the industry including The Chieftains, award-winning Scottish band Lau, fiddlers Maeve Donnelly and Shane Cook, award-winning multi-instrumentalist Steafan Hannigan, and Chicago-based duo Bohola.

Each of the four tunes on this EP are progressively modern in their composition. Jacob explains that they represent a great snapshot of where his new group Nua want to take their music. "Basically since every tune on the EP is original, it is a perfect example of the types or style of tunes we compose. We are rooted in traditional Irish and Scottish music (since all three of us have been exposed to it and have been playing since we were very young) but we obviously have applied a very modern approach to our music. With that said, we have never wanted to fully leave the traditional side of things, rather just grow upon it with our own sound. Each of us bring a unique element to the group, and that's one of  the main drivers of the group.

As opposed to most groups who have several members, some in the spotlight most of the time, others staying in the background, we wanted to have three members that equally share the spotlight so to speak. Where each member can take on multiple roles depending on what is going on musically. Obviously when it comes down to it, we only have one melody player, but the guitar and bodhrán both have their moments to speak melodically instead of just rhythmically. The fiddle also has times to lay back and keep a more rhythmic feel or a more subtle drone. All in all, we like to provide an exciting sound which is just as exciting on CD as it is live. Although, obviously nothing beats hearing the music live!" 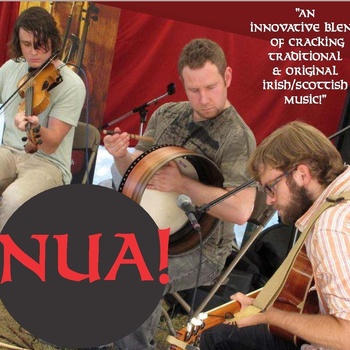 He takes us on a journey through each of the tunes starting with Fizzbuzz. "Fizzbuzz is basically a jig (to put it in simple terms) but in reality all that is saying is that it is loosely in 6/8 time. Rhythmically there are lots of other things going on (for example moments of odd-timing and syncopation) that can take you out of the jig timing. Then we have the intro and bridge which is a 6/8 driven chord progression with off-beat accents. The bridge also has a small solo section which of course is not traditional. Other things like dynamics help with the flow of the tune and ultimately help create the overall mood as the tune goes from start to finish.

The Draw can be considered just one tune, but with a solo section in the middle. But the A and B parts of the tune are in different time signatures. The A part is in straight 6, whereas the B part is in 4/4 similar to a reel (it is good to take note of the heavy syncopation that occurs in the B part as well). The solo section is structured upon a guitar chord progression (that plays throughout and is in 4/4 with a bit of syncopation in places) with solos from each instrument. It then goes back into the main tune (with just fiddle and bodhrán) but when the guitar comes back in; polyrhythms are heard with the guitar and bodhrán playing in 4/4 while the fiddle continues to play in straight 6. Overall the tune featuring both melodic and rhythmic features by each instrument."

Martins Yellow Tea Pot is essentially the “slow tune” on the EP. Although the majority of our tunes are upbeat, we do have several slower pieces (more of which will be on the full-length album) and this happens to be our favourite. The tune has the feeling of a waltz in 3/4 but it is written in straight 6. Certain elements in this tune stray away from our more common sound in the other tunes. One of the most obvious differences is the brush tipper used on the bodhrán. The brush tipper allows for the sound of the brush (very similar to a shaker) while maintaining the sound of the drum (bass tones and melodic tones). The guitar also has some overdubs (most noticeably in the intro) that we don’t commonly use in our recordings.

For the most part we hear the guitar and bodhrán very well linked together, but there are certain times (such as the bridge in the middle of the tune) where the bodhán links melodically with the fiddle. It is also good to take note of a polyrhythm that occurs when the guitar and bodhrán do shots together towards the end of the tune. Overall though it is a very simple melody with a fairly simple arrangement. There may be several more complicated things going on at times, but our aim was to write a beautiful and uplifting piece of music.

Lastly, The Hijack is sort of the jazzy piece of the bunch. It is certainly the most complicated piece on the EP, having several different time-signatures, polyrhythms, syncopation etc. But to break it down there is essentially a first tune, then a bridge of sorts which then goes into a reel, the reel then goes into a bridge and then back into the reel and out. It’s tough to try and talk time signature with the first tune and there is so much going on rhythmically. The intro guitar and bodhrán rhythm could be classified as a heavily syncopated 4/4 rhythm going in to the A part of the reel which is based upon the same structure. But the B part cannot be classified in a time signature. The fiddle has its own melody, with the guitar and bodhrán work together to create a polyrhythmic melody that at times links with the fiddle. It’s the type of tune where you really have to listen to what’s going on to appreciate it all. When the tune was written, it was the first the fiddle melody that was written, then the guitar and then I had the difficult task of fitting into the mix. I wanted to follow both the fiddle and the guitar at times, but that meant doing polyrhythms which in itself is extremely hard on the drum. Graeme’s guitar playing is insane on this track and just to follow that is hard when all you have is one tipper!

The first bridge is very rhythm based having all three instruments playing the same thing together at the beginning, then switching to harmonies on the guitar and fiddle and rhythm and melody at the same time on the bodhrán. From there switching to a more rhythm base with the guitar and bodhrán transitioning into the beginning of the reel. The reel is fairly straight forward with no crazy syncopation or anything. When we enter the the 2nd bridge, we basically are treated to a melodic build up which explodes at the end going back into the reel and out. The 2nd bridge is really meant to just give the listener a real feeling of the piece continually changing and building up to a climax before it’s over. It’s also a real hoot when played live!

This provides a fascinating insight into the creative process and makes NUA a band that will have a real statement to make when further compositions come forth for a planned 2013 album. Apart from this project Jacob is also involved in the production of his first Bodhrán Instructional DVD, and an experimental album with guitarist Santiago Dobles & bass player Alan Goldstein of progressive Metal band "Aghora" So have a listen to these tracks on bandcamp where you can also purchase the EP