Last night Dublin band The Jeremiah's picked up their award as winners of the Tradconnect Songwriters Showcase.  The occasion was Christy Moore's concert in Vicar Street, Dublin. We ran the Songwriters Showcase on the site in the Autumn of 2014 with the winner announced in January. We were delighted when Christy Moore came on board with us to listen to the material.  We expected maybe 30 songs, and in the end we received 65.  The showcase was about giving exposure to writers and proved a major success. Thousands of readers listened to the songs and it was one of the most successful campaigns that we have run on the site.

The task for Christy was a big one, as the quality of the material was very strong.  There is never really a ‘best’ or a ‘winner’ in these situations and picking out one song is difficult.  In the end Christy went with the song “Forgotten Sons” by The Jeremiahs and last night the band picked up their prize of €500, kindly donated by Christy.

In their initial submission The Jeremiahs said that “The inspiration for this song came after watching a documentary on the forgotten Irish in England and the Irish film Kings which is based on the play The Kings of Kilburn Road.  We jokingly refer to one of Ireland's pastimes being emigration but the truth is the Irish have a long history and tradition of emigrating to try and find a better life. Some succeed and some don't and this song is dedicated to the latter.” 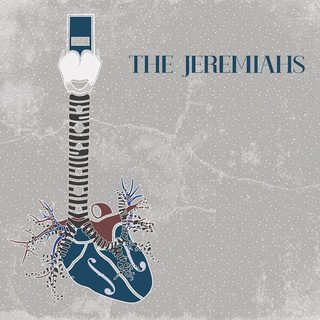 When we spoke to them they said “We were delighted to hear that Forgotten Sons has been picked by Christy Moore as the winner of The Tradconnect Songwriter Showcase. To be singled out by one of our role models, and given the high quality of the other songs in the competition, it is an honour. It is also very encouraging to see the growth in popularity and support by fellow musicians and music lovers in our own music. It is about time we made an effort to support our homegrown talent.  The song really resonates with the times at the moment.”

As a final note the band said “we sang this song recently in The Newcastle Irish Centre and an old man thanked us afterwards.   He said he had not been home in over 40 years.​”

The Jeremiahs combine traditional and contemporary sounds to create their own brand of Urban Folk music. Members include Joe Gibney (Vocals/whistle), Brian Corry (Tin whistle/Flute/ Fiddle),  James Ryan (Guitar/Bouzouki) and Jean Christophe Morel (Fiddle). You can visit their website at www.thejeremiahs.ie They also have their debut album on release which can be purchased through their website.

Here is a link to the final announcement with all the songs included.