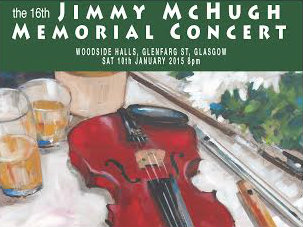 This year The Jimmy McHugh Concert Weekend enters its 16th year and takes place on 10th January 2015 at Woodside Halls in Glasgow. In this years brochure the organisers state that "Over fifteen glorious years, we have been able to bring the very finest of musicians from the world of Irish and Scottish traditional music to perform at The Jimmy McHugh Concert. And this year is no exception, we can boast a bill of magnificent artists; Mick O’Connor from London on banjo, Cavan accordionist Martin Donohue, fiddler Manus McGuire from Sligo, Singer and flute player Colm O’Donnell also from Sligo and Altan’s own guitarist, Mark Kelly from Dublin. Also performing will be the Shamrock School of Irish Dancers, perfectly prepared and presented by Mrs Ann McHugh.

The Jimmy McHugh Concert ‘Weekend’ has grown to become a permanent fixture on the traditional music calendar, in celebration of Jimmy’s life and music, and whether as a participant or someone who just loves the music, everyone is made to feel especially welcome, just as if Jimmy was opening his front door to welcome you in to his home."

Born in Omagh, County Tyrone in 1930, Jimmy grew up in Glenfinn, County Donegal where he learned to play the fiddle at a very early age and in his lifetime became recognised as one of the finest players of his generation, a prodigious talent which brought him the coveted All Ireland Fiddle Championship 1957.  He emigrated to Scotland in 1946 settling in Glasgow where his contribution to the development of Irish music and culture was enormous, including the establishment of the first branch of CCE outside Ireland as well as leading the famous Four Provinces Ceili Band.

Martin is a great accordion player from the Co Cavan, he is one of the real char­acters of Irish music and is affectionately known as the ‘Cavanman’. Martin and Jimmy played regularly together and Jimmy always greatly enjoyed Martin’s playing and his famous or infamous craic. As well as being a terrific accordion player, Martin takes a strong interest in his local music scene, playing a central role in organising both the Nyah Festival in Co Cavan and also the All Ireland Fleadh Cheoil in Cavan town. This will be Martin’s first appearance at The Jimmy McHugh Concert.

Manus is a highly regarded and much sought-after fiddle player, originally from Sligo, and now residing for many years in Co Clare. Manus has known Jimmy for a great number of years and over the years has been a frequent visitor to the McHugh household. He has recorded solo fiddle albums, duo fiddle albums with his brother Seamus, and a number of CDs with bands Buttons and Bows, Moving Cloud, and Brock McGuire. Manus is a noted composer and teacher who travels worldwide for festivals and concerts.

Colm is a Sligo musician noted for his great singing, flute playing and lilting, he is also a talented music composer and researcher. Colm first met Jimmy when he performed on a Comhaltas Tour of Britain and, following the concert, stayed in Jimmy’s house where they enjoyed an evening & morning of great music, warm hospitality and great friendship. Colm has toured the world over both as a soloist and also as a member of various groups, including, the ‘Border Collies’ from Sligo. The group released the album ‘Unleashed’ in 2004 and Colm has also released three solo albums:

Mark is an internationally-known guitarist and member of the world famous Irish music group Altan. Mark and Jimmy’s friendship stretches many years when Mark used to visit Edinburgh to perform at the Festival with a music group from Clontarf, in his native Dublin. On his many travels with Altan, Mark would often come through to Glasgow to meet with Jimmy for a few tunes. Mark is equally comfortable and proficient playing both jazz and clas­sical guitar. Mark is taking a short break from touring with Altan to come to Glasgow for his inaugural appearance at The Jimmy McHugh Concert.
a
For more information visit www.jimmymchugh.co.uk
a