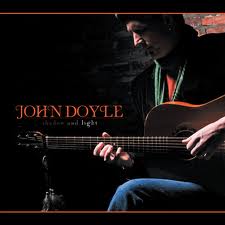 It is not often that a single artist defines a genre, but then there is John Doyle and Traditional Irish music to consider. Doyle seems to be a Jack of all musical trades and a master of all. Great composer, lyricist and performer. I had the pleasure of watching him perform in an old church in Knoxville, Tennessee on a cold January night. The turnout was not as large as I thought it would be, but after the first song the whole shebang turned into a parlor concert and I was fan for life. Hailed as the best Irish guitar player on the planet, Doyle’s latest album Shadow and Light is a remarkable mixture of story song and instrumentals and frankly, I can’t stop playing it. As Yeats was responsible for the Irish Renaissance, so is Doyle for the revitalization of Traditional Irish music. Go figure, they both have roots is Sligo County.

John Doyle’s story songs starts out with Clear The Way. The tale is of the Irish Brigade that fought in the American Civil War. History shows us that the Irish never shun a skirmish that promises freedom and this story is no different. The upbeat tune features the fighting Irish as valiant soldiers, but their numbers were devastated. There’s that history repeating itself again. Great fiddle by Stuart Duncan and button accordion by John Williams.

Little Sparrow is a sweet, little song almost sung as a children’s’ song and no wonder. It is dedicated to Doyle’s daughter, Rossagh. As I listened to it I could imagine Rossagh’s adoring look as the song unfolded. It is about all the amazing gifts that a child gives without even knowing it, but best of all the gift of love. As I listened not only to the concert, but this album, it was obvious that Doyle’s one true love is not Irish music, but the love of family.

One of my favorites on Shadow and Light is called Wheel of Fortune. It is one of Doyle’s best efforts about a lost love and the only answer is to get away from yourself as the man did in the song. He went west 6000 miles and ended up in the gold fields of Dawson City in the treacherous Yukon Territory of northern Canada.

During the concert I attended, John suggested a sing-a-long and the tune was Bound for Botany Bay which also appears on the recording. Since at least half of Ireland was condemned to the penal colonies at one time or another, it was expected that such a story song made for great enthrallment. The rebellious James O’Donnell is shipped off to Australia and all hope is lost.
“My name is James O’Donnell in irons and chains I’m bound
In exile from my native land as a traitor to the crown”.

Many cultures have the mythology of man/creature transformation and the Irish have their Selkie. A seal like creature that dons the mantle of man or woman for a time, but after seven years must reacquaint its bond to the sea in order to survive. John offers his dream-induced ballad and I learned of the fate of the Selkie, and, of course, it is a sad one at that.

John Doyle made a name for himself as a great musician, as a member of the group Solas and as a respected partner and collaborator. This latest effort solidifies his standing as a leader in the Irish Traditional Music community. His love of life, family and tradition make his music memorable on many levels. John lives with his family about sixty miles from me in Asheville, North Carolina. I’ll be scanning the news for concert dates. As I said, I am a fan.

This Review was first posted on www.zonemusicreporter.com