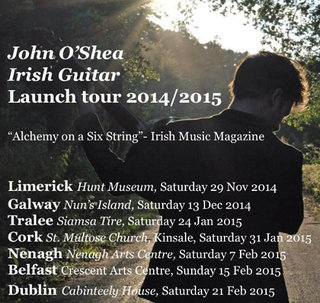 We recently featured a track from a new guitar album by John O' Shea, and he will be undertaking a short Irish tour in November/December in support of the album it is taken from, called Irish Guitar.

It starts in The Hunt Museum in Limerick on 29th November.

"Its the first fingerstyle guitar album we have received that has managed to overcome the problem of "sameness" that can blight such albums.  John brings a bit grit and guttural rawness to the tracks.

Have a listen to the polkas McAuliffe's/The Glen Cottage Boys/Two Little Goats below for an introduction.  There is a fine selection of jigs, reels, polkas, airs and a composition by Mícheál Ó Súilleabháin.

John is also joined by fiddler Anna Jane Ryan for a couple of tracks for the all important change in sound. She will also take part in the tour. Visit www.johnosheaguitar.com