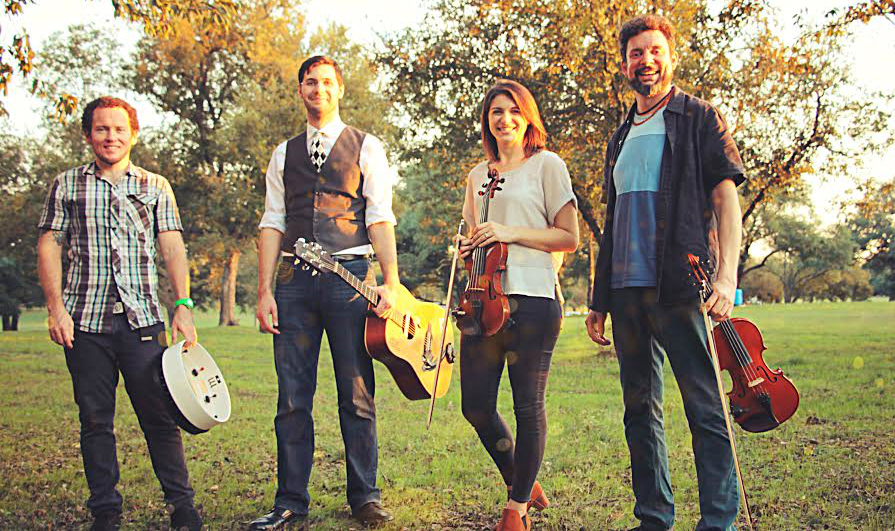 Welcome to Tradconnect’s Worldwide Album Launch Series. For these launches we are working with over 120 radio broadcasters globally, making new traditional releases available for immediate free download through our Download Centre. For artists this makes an online launch a truly global event, with radio stations around the world gaining instant access to the album.

All accomplished musicians in their own right, together they create a rich and captivating sound full of energy that presents Irish traditional music in a contemporary context. Drawing from each of their backgrounds in Irish music, with a geography that spans the United States and Ireland, The Here & Now keep tradition at the heart of their music.

This debut captures the live energy of The Here & Now. Recorded live at Test Tube Audio studios in Austin, the 11 tracks on this album take the listener on a journey through lively polkas, contemplative airs, energetic jigs & reels and contemporary song.

This is Track 1 from the album called “Madison Avenue”.

The album is a mix of old and new with original tracks from members Niamh Fahy & Chris Buckley peppered throughout, providing the listener with a sense of intrigue, reflection and delight.

Chris Buckley has spent the last decade plus as a member of the renowned Irish music trio, the Tea Merchants. After growing up in Wisconsin, he came to Austin to pursue his Master's of Musical Arts degree at the University of Texas and has been here since developing a reputation as one of Texas’s most sought after fiddle players. Niamh who is originally from Co. Meath in Ireland, moved to Austin in 2014 having spent the previous 10 years playing music full-time, 5 of which  she spent as soloist with Riverdance. She has also worked with Project West, The Dhol Foundation, Donal Lunny' The Chieftains & John Williams.

Rob Forkner is a master Bodhrán player and is also one of the world's most highly sought after Irish drum makers. He, along with Chris, is a founding member of the Tea Merchants, and after a time in Europe has returned to Austin, to combine forces musically once again.

Joseph Carmichael, guitarist and whistle/flute player from Dallas is a founding member of the Irish music trio, Flashpoint. He tours regularly with the Mari Black band and Ashley Davis. He pulls from a variety of influences to create a style that brings the band's music together.

If you want to hear more, the album is now available to purchase on www.thehereandnowmusicatx.com or you can download it from www.cdbaby.com

Recorded by The Here & Now and Kevin Butler