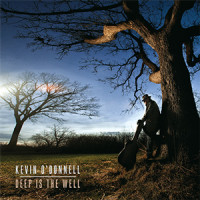 After a 15 year hiatus from playing Irish music, Kevin O’Donnell now presents his first ever solo work.  3 years in the making, DEEP IS THE WELL is an ambitious collection of original songs telling the tale of an Irish-American family through multiple generations.  It has been produced by Maurice Lennon (Stockton’s Wing) and in addition to Kevin features: Jim DeWan, Finbar Furey, Larry Gray, Kathleen Keane, Bill Lanphier, Maurice Lennon, Haley O'Donnell, John Rice, John Williams, and Jessica Willis.

Deep is the Well follows the descendants of Michael Fagan, a 19th century Irish immigrant, through 170 years of struggle for the American Dream. Their experiences still echo in the places they called home – from the forgotten prairie towns of the industrial heartland to the insular steel mill culture rimming the lower Great Lakes; from Times Square in New York City to the San Joaquin Valley in California; and from the frozen copper country of Lake Superior to the rain-soaked suburbs of the Pacific Northwest. Kevin is known as more than a singer-songwriter but also an author and historian.  DEEP IS THE WELL is a work of historical fiction drawing extensively from real-life events.   Kevin has penned a novel-worthy history of the Fagan family, from 1837 through today, steeped in a real American past.

While there are many strong connections and instances where American folk songs and tunes can be traced back to Ireland, and many fine songs written about the Irish experience abroad by Irish expatriates – especially in America - the experiences of their subsequent generations has gone virtually ignored. There has never been a collection of songs written exclusively from such a perspective.  This is the impetus behind the DEEP IS THE WELL project – uniquely American story-songs that are the specters of a common Irish past.

Kevin returned to the studio in 2012 when Maurice Lennon, of Stockton’s Wing, agreed to produce an album of Kevin’s material. Kevin and Maurice eventually settled on ten original songs for the project. Some were pulled from the drawer; while others - previously recorded by Kevin in the ‘80s and ‘90s - were retooled, rearranged, and in some cases, completely rewritten. The project inspired Maurice to write an original tune (A Letter Home) that serves as a prelude to the album.

DEEP IS THE WELL will be released and available online Friday, May 3rd for purchase from iTunes, Amazon, and CD Baby.  A music video for the song “Factory Girl” will be launched April 16th.  Stay tuned for Album Release Events scheduled for May in the Chicagoland area, which will feature many of the guest artists on the album. Source : Official Press Release